Ryan Reynolds on How He Shares Parenting "Labor" With Blake Lively

Ryan Reynolds has taken a deep-dive into his fatherhood journey with partner Blake Lively, revealing that they both share the “labour” of parenting.

The celebrity couple, who have been married since 2012, share three daughters together – seven-year-old James, five-year-old Inez and two-year-old Betty. But, speaking to David Letterman in a teaser clip for Netflix’s My Next Guest Needs No Introduction, Ryan confessed that he wouldn’t be the parent he is today if it weren’t for his wife. “Blake, full disclosure, really showed me how to do all this,” he admitted candidly.

“Blake runs the show,” Ryan added. “I would kind of really phone things in if it wasn’t for her. She has higher standards.”

The host then asks Ryan if he would feel “anxiety” if Blake were to leave him and the kids alone for a few days, for example to visit her family. “I would, first off, never let her go visit her family,” the actor jokingly replies. “No, yeah, that is illegal. That’s kidnapping.”

On the topic of being left alone as a “girl dad” for an extended period of time, Ryan said he would find this “pretty exciting at first” but quickly added that “division of labour is very important” when you’re raising three kids. 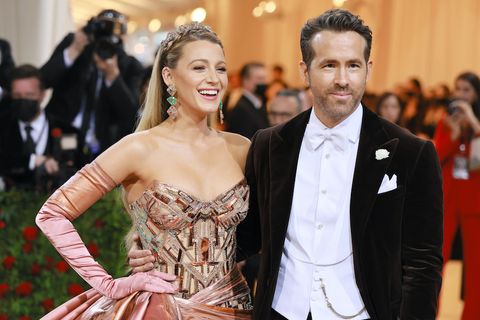 This isn’t the first time the father-of-three has opened up about his experience with parenting, previously taking a short break from acting in October 2021 to focus on his children. “We all want to be together during this time. Our kids are still quite young, and I don’t want to miss it,” he told People, later telling Access Hollywood: “My kids, they’re growing up faster than time and space would have suggested, so I want to be there.”

And it seems that spending quality time together as a family is at the top of his parenting priority list. “I just try to be as present as possible,” the 45-year-old Reynolds told Access Hollywood in November 2020. “We don’t split up. Like, I shoot movies and my wife shoots movies and we go travel all over the place, and we just all go together. I think that’s been the best part of it is that we really don’t spend a lot of time apart. I get to spend a lot of time with my girls.”

Erm, these two definitely sound like the coolest parents on the planet.