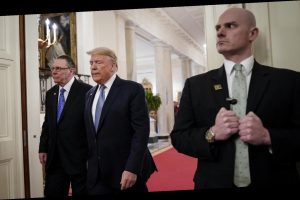 In the days following the November 2020 election, in which President Donald Trump lost his bid for a second White House term to President-elect Joe Biden, many speculated whether or not the exiting commander-in-chief would simply refuse to physically leave the White House — an action that could feasibly have dire consequences. One of the worst case scenarios, which Forbes writer Jack Kelly outlined in a November 2020 article, is that Trump, who has still yet to concede the election despite verification from the Electoral College, would essentially engender government agents to aid him in barring himself in the Oval Office, a recipe for a disastrous, democracy-threatening coup. Unfortunately, a recent report by The Washington Post on Dec. 31, 2020, makes it seem like this hypothetical situation is a lot more feasible than we could have realized.

According to The Washington Post, the government agency has made staff changes to the security detail that will protect Biden “amid concerns” that “some current members were politically aligned with [Trump].” As The Washington Post also noted, the idea that agents loyal to Trump might prevent a peaceful transition isn’t entirely far-fetched, especially with regard to directives they have purportedly been given before. In a November 2020 Washington Post piece, the newspaper reported at least 130 agents had been diagnosed with COVID-19, which possibly was caused by discouragement from Trump himself to follow prophylactic measures like wearing face masks. The reason? Per the Post, it is because the lame-duck president views it as a sign of “weakness.”

Though fears of a possible coup seem to be a major impetus for the shake-up in soon-to-be-former-President Donald Trump’s Secret Service security detail, at least one agent, who spoke with The Washington Post under the agreement of anonymity, pointed out that it also serves a more practical purpose: to also grant President-elect Joe Biden a feeling of comfort and safety.

“That is smart to give the incoming president the comfort of the familiar,” said the Secret Service insider. “You want him to be with people he knows and trusts, and who also know how he operates.”

While the news of the change-up in Trump’s security detail — and, more so, the idea that any member of the Secret Service might utilize their status and authority as an agent to prevent President-elect Biden from assuming office on Jan. 20, 2021, after being sworn in — might alarm many, a statement made by agency spokesperson Catherine Milhoan side-stepped these concerns but outlined the function of agents as a whole.

“The U.S. Secret Service is uniquely authorized to provide protection to designated U.S. and other world leaders and remains steadfastly dedicated to a standard of excellence in those operations, wholly apolitically and unaffiliated with the political parties of protectees,” Milhoan stated to The Washington Post. “As a matter of practice and due to operational security, the agency does not comment on protective operations inclusive of internal decisions on agency assignments.”