Home » Falling in Love With Another Model Was Never the Plan

Falling in Love With Another Model Was Never the Plan

Not everybody who signs up for dating sites is looking to date. Amanda Lauren, a Playboy and Maxim model, joined Hinge in 2020 to attract Instagram followers, not potential boyfriends. Adam Mann, a British model and semiprofessional soccer player, joined for similar reasons. Each has lately come to value online dating for its intended purpose.

“A lot of models and influencers use dating sites as a marketing tool,” said Ms. Lauren, who was born Amanda Lauren Bruce. “The sites get pretty mad when they suspect you of doing it. They might ban you for life.”

Ms. Lauren and Mr. Mann had fallen in love on Hinge before either was in danger of getting the boot.

Mr. Mann, 29, started playing soccer in his hometown Gloucester at the age of 6. By 18, he had become a striker on the city’s semiprofessional team. “Striker is sort of the equivalent of a quarterback in American football,” he said. After five years, he left to join Bath City. There, he started picking up attention for his David Beckham-esque looks as well as his skill at peeling off defenders. In 2019, he became a spokesman for Herbalife. The sports nutrition brand Huel came calling, too. By the time he joined Hinge in 2020, his face was familiar enough for him to land a spot on the British reality show “Celebs Go Dating.” 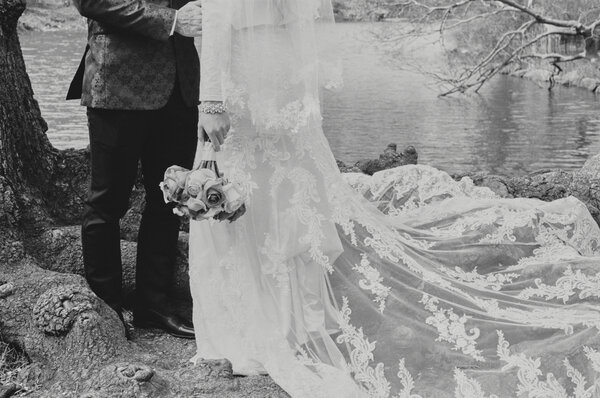 His bid to leverage his looks for likes on dating sites had begun in earnest when he matched with Ms. Lauren in July. “As you can imagine, when I saw her on there I thought, obviously this is a fake account,” he said. “That can’t be her.” Ms. Lauren got that reaction — the one she wanted — a lot. “That’s why people start following you on Instagram,” she said. “They go to check you out because they want to confirm it’s you.”

Ms. Lauren, 36, grew up in New Jersey with her parents, Norman Bruce III and Monique Baggiano, and an older sister, Danielle Kraft. The family lived in Burlington Township until her parents divorced. Then she moved with her mother to Mount Laurel, N.J.

“From the moment Amanda was born, it was like, ‘A Star is Born,’” said Mrs. Kraft, who is 11 years older. “She’s been skirting the edges of celebrity for a long time.”

Fame is not her only interest. “As a kid I had dreams of being an astronaut and an actress,” Ms. Lauren said. Her parents encouraged both. “They were kind of like hippies turned yuppies. They wanted me to go to college and use my brain. But my mother was a wild person who walked around the house naked. For her, there was no shame in sexuality or the human body.”

Familiarity with the physical took Ms. Lauren in a couple of directions. Before she started modeling, she was a registered nurse. In 2011, she received a bachelor’s degree from the University of Medicine and Dentistry, a partner school to Rowan University. Just after, she started working as a nurse at Underwood-Memorial Hospital in Woodbury, N.J.

[Sign up for Love Letter and always get the latest in Modern Love, weddings, and relationships in the news by email.]

The seductress image she would cultivate on magazine covers like the French edition of Maxim and Sweden’s Playboy came years later. From 2009 to 2013, she lived in New Jersey with a boyfriend she planned to marry. “We were engaged, and I had converted to Catholicism because his family was traditional and wanted a big wedding,” she said. “But there was not a lot of transparency in that relationship. He was the wrong guy.”

So was her next boyfriend. In 2014, Ms. Lauren left New Jersey for Los Angeles. “I had a girlfriend who was moving there with her husband, and I thought, I might as well go with them,” she said.

She landed what she called a dream job as a nurse at Promises Treatment Center, a rehab facility in Malibu, and began a social life. “I got into the whole Hollywood circuit where you’d go to parties in the Hills and meet a lot of celebrities.”

One of those celebrities was Charlie Sheen, who she met through a friend in 2015. “He was at the tail end of his bad four years,” she said. They dated nine months, until just before he publicly announced his H.I.V. diagnosis. “I have nothing bad to say about Charlie,” she said. “It just didn’t work out.”

In 2016, Ms. Lauren gave up nursing and moved to Paris to model. Until the start of the pandemic, she stationed herself between Paris and London, flying frequently for jobs. She was living in London when she joined Hinge. Mr. Mann lived in Bath, two hours away.

She barely noticed when they matched in July. But he was persistent. “Not to mention adorable,” she said. “I was obviously very keen to meet her,” Mr. Mann said. His attempts to do so were eventually rewarded with a response.

“It was, ‘Sorry, no, you’re too young’,” Ms. Lauren said. “Then he started posing really good arguments. Finally he said, ‘Look, I’m sure you’ve dated younger guys, but I’m not like most people my age, and I’d love the chance to prove it.’”

By the end of the summer, they were messaging each other daily on Instagram.

“I started talking to my sister about him,” Ms. Lauren said. He shared details from his past, including a gambling addiction and the reason for his neck tattoos. “I had bad acne as a teenager,” he said. “They were a way to cover the scars.”

Before a modeling trip to Dubai in November, Ms. Lauren bought a return ticket to London with the intention of finally meeting Mr. Mann. England was on lockdown; staying in for an intimate first date over takeout Thai food at her rented flat was the plan.

“When you see Amanda’s exterior, you’re like, ‘How am I in this situation, with someone so beautiful whose ex-boyfriend is Charlie Sheen?’” he said. But the nerves gave way to in-depth conversation, and kissing.

Ms. Lauren and Mr. Mann were feeling the stirrings of love, but hadn’t made any commitments to each other, at the end of that November weekend. Then came a predicament. Hours after she packed to leave the rented flat, he called her with the news that he had just won a spot on “Celebs Go Dating.”

“It was a strange moment,” Ms. Lauren said. “I knew it would be a way he could raise a platform for himself, so I wasn’t going to say, ‘Don’t do it.’” Instead, she encouraged him.

In a matter of weeks, Mr. Mann had moved into a mansion in Surrey with several strangers, ostensibly to find one to date. “But I was just a pawn in the chess game of the story line,” he said. “You get used and abused.”

Within days, he was dismissed. His phone had been confiscated throughout the taping, leaving him no way to let Ms. Lauren know he had thought of her constantly.

Still, “before the show, he had told me, ‘Look, I know we’re going to be together at the end of this,’” she said. That prediction proved accurate.

For Christmas, they reunited in Dubai in United Arab Emirates. Before they had a chance to go sightseeing, Mr. Mann contracted Covid-19. Ms. Lauren, who had already been infected, still had antibodies. Their 14-day quarantine, both say, unspooled like a love song.

“We had the best time by ourselves,” Mr. Mann said. They met each other’s family over FaceTime; Mr. Mann’s parents, Stephen and Vivienne Mann, are still in Gloucester. An older sister, Sally Mann, is in London. “And Amanda introduced me to all these classic American movies, like ‘Goodfellas,’” Mr. Mann said. Ms. Lauren cooked and resurrected her nursing skills while Mr. Mann, whose symptoms were mild, recuperated.

They were in Mantua Township, N.J., visiting Mrs. Kraft in late March when they started talking about marriage. “It was just a couple of conversations we had,” Ms. Lauren said. No formal proposal had been made when they discovered through Google that marriage licenses in New York City were available 24 hours after an application. Mr. Mann had only a few weeks left to stay, legally, in the United States.

Neither felt pressure to marry before Mr. Mann’s visa ran out.

“But New York is one of my favorite cities in the world,” Ms. Lauren said. When they learned of the quick license turnaround, “I told him, ‘We don’t have to do this now,’” she said.

They secured a license on April 6. On April 17, they married at Wagner Cove, along the lake in Central Park. Ms. Lauren wore a lace mermaid wedding gown she bought days before at RK Bridal and carried a bouquet of roses and lilies; Mr. Mann donned a black tuxedo with a subtle floral design. Their wedding photographer, Immad Khan, did double duty as their witness. Only Mrs. Kraft and Mr. Mann’s parents knew they were marrying in advance.

Larissa Martell, a professional wedding celebrant and Universal Life minister, officiated. “Your beauty is obvious,” Mr. Mann said in his vows. “And you’ve got the kindest heart. You’re the strength I didn’t know I needed, the joy I didn’t know I lacked. It will forever delight me to see you happy.”

Ms. Lauren reminded Mr. Mann that, for the past four months, they had not spent more than a few hours apart. “I have never felt so complete,” she said.

“Amanda and Adam,” Ms. Martell said after they slipped just-bought bands on each other’s fingers. “Congratulations. You are husband and wife.”

Tucked in their cove in the crowded park, with just a few watchers to notice, they lingered over a kiss.

Party of Two After the wedding, the couple took a carriage ride through the park. For their first night as a married couple, they stayed nearby at the InterContinental Hotel. Il Corso, their favorite New York City restaurant, delivered a celebratory dinner.

Jet Set On April 19, the newlyweds left New York for London. They plan to establish a home there while continuing to travel internationally for work. Mr. Mann is looking forward to a spring celebration with his family in Gloucester.

Family and Future Before they decided to marry, Ms. Lauren told Mr. Mann she had a low ovarian reserve, which could make conceiving a child difficult. Both would like to start a family. “It’s something a lot of women deal with as they grow older, and dating a younger man only adds to the pressure,” Ms. Lauren said. But Mr. Mann has been supportive. “He told me not to worry, and that he wasn’t worried at all. I think it’s nice to know that, although rare, men like him are out there.”