Home » Fashion » Gucci is selling a $2,600 dress for men to challenge ‘toxic stereotypes’

Gucci is selling a $2,600 dress for men to challenge ‘toxic stereotypes’ 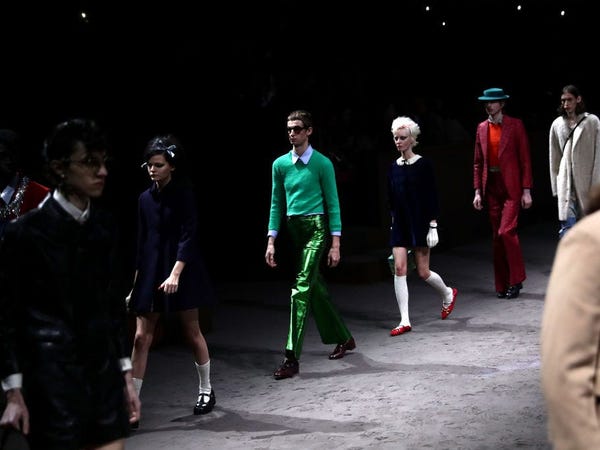 Gucci is selling a $2,600 tartan smock for men which the brand says challenges the "toxic stereotypes that mold the masculine gender identity."

Featured as part of its Fall/Winter 2020 collection, the orange and beige 100% cotton embroidered smock features mother of pearl buttons and a satin bow at the waist, as well as a white contrast Peter Pan collar which, according to the website, adds "a childhood inspired element" to the garment.

The collection in its entirety is inspired by the grunge movement of the 1990s and is a blend of mismatched colors, oversized jackets and sweaters, and jeans ripped at the knee.

With the idea of gender-fluid clothing mostly welcomed within the fashion world, people on social media have had a lot to say about this particular dress — from its price and styling choices to whether it actually breaks down toxic masculinity.

One user tweeted: "Blokes have been 'wearing make up' and other 'typical girly' stuff for years, many of my favorite 80s pop stars, they didn't find being masculine 'toxic,' just went for a vibe. Some were gay some were not. Wtf are these dullards actually trying to say?"

"If you want to fight 'toxic masculinity stereotypes' and have £1,700 to spare give your local women's refuge £1,680 and buy yourself a T-shirt," another said.

The styling of the dress has also faced criticism, with many users calling it "ugly."

It wouldn't be the first time the fashion brand's styling choices were questioned, most recently with the unveiling of its $775 grass-stained jeans last month.

There are many questions and discussions that surround ideas of fashion and gender. Earlier this year Insider's Darcy Schild reported that London Fashion Week would be gender-neutral for the first time in London Fashion Week's 40-year history.

Fashion brands are continuously looking at ways to be more inclusive and present new ideas that confront social norms — even if some still have a long way to go, as Frank Olito found when reviewing Banana Rebuplic's gender-neutral clothing line.

Gucci did not immediately respond to Insider's request for comment.