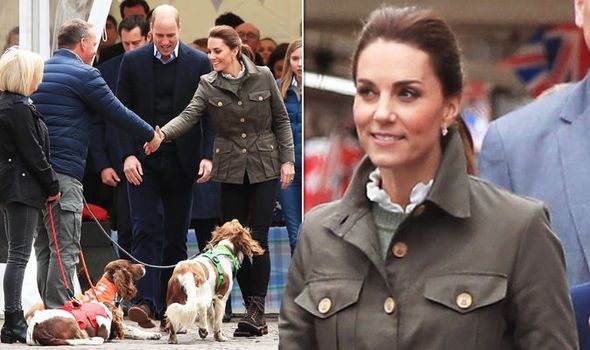 Kate Middleton arrived in Keswick today. She wore a khaki jacket, a green jumper and a shirt with a ruffled collar beneath.

The lithe Duchess highlighted her long legs in black jeans and wore brown walking boots on her feet.

Kate Middleton’s jacket is a £275 khaki number by Troy London. Her boots are the Liegi Suede Ankle Boots, originally £360.

Kensington Palace tweeted: “Today The Duke and Duchess of Cambridge are celebrating the work of local heroes, farmers, volunteers and those supporting the rural community in Cumbria – starting in Keswick!”

The message was posted alongside a video of Kate meeting enthusiastic dog.

Crawling under the railings to get near to the Duchess, the dog wagged his tail as he was petted on the head by the royal.

Another said: “So refreshing to see a royal come down to the level of common folk – helps that she used to be one…she is relatable to a certain degree.”

“Love her. Dogs and children love her. That tells us everything we need to know,” one fan wrote, while another said: “That’s my queen never forgetting to pet the doggies !!!!!”