Home » Fashion » Too crushed, too expensive: how a Bondi brand broke the linen mould

Too crushed, too expensive: how a Bondi brand broke the linen mould Anyone who has owned a pair of linen pants will attest to the following: they are cool in summer and super-comfortable but can be a pain to launder and are often expensive.

Sean Venturi understood this conundrum when he and his former business partner started Venroy in Bondi in 2011. 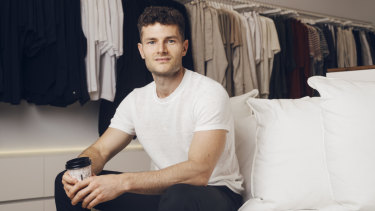 Venroy designer Sean Venturi: ‘One of the major issues I had with wholesale was if it’s $100 in store, they are buying it for $40.’Credit:James Brickwood

While the pair launched with boardshorts – "there were no shorts on the market we wanted to buy" – the label now comprises about 90 per cent linen separates.

"We didn't have huge business ambitions, we were wholesaling the shorts at cost and it was just [a matter of] getting them out there," said Venturi, who studied business at UTS, while his ex-partner was a graphic designer.

On a trip to the US, Venturi realised the brand's future lay in securing the west coast market. He intended to stay six months, and wound up there four years.

"We knew there was a year-round summer globally; that hit home when we were over there. We realised it could become a business we could survive off," he said. 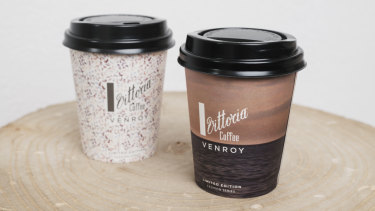 The coffee cups designed by Venroy for the Vittoria Fashion Series for Fashion Week.Credit:James Brickwood

Early success with stockists including Fred Segal, Barney's and Nordstrom led to 200 stockists worldwide. But the pair were discontent that they weren't able to directly reach their customers. So they did the only (crazy) thing that made sense: they shut their wholesale operation.

"I came into this industry with zero [fashion] experience. One of the major issues I had with wholesale was if it's $100 in store, they are buying it for $40. The true cost of something is what it can be supplied sustainably at," he said.

By going direct to consumer and opening their own stores, costs could come down, with Venroy's signature linen pants selling at a relatively affordable price of less than $200.

The brand, which launched womenswear last year and plans to open a store in Melbourne by the end of this year, also works hard to bust the myth that linen is only good if it's pressed to perfection.

"Some people want to press their linen but we're really relaxed about that," Venturi said. "There are wrinkles through it, but having a relaxed look helps you relax. People get home after work and chuck on trackies and an old jumper because that's what they are comfortable in."

In keeping with the brand's focus on the coastal lifestyle, Venturi is considering a foray into homewares and other categories.

To test the waters, the team created two cups for Vittoria coffee, as part of its Mercedes-Benz Fashion Week Australia Fashion Series, which features designs by labels including Dion Lee, Macgraw and We Are Kindred.

But Venturi is conscious of not broadening the scope of the brand too much that it strays far from its original purpose: to dress people for their leisure time in luxurious pieces made from natural fibres.

"A lot of brands get lost because they are trying to be too many things in people's lives," he said. "What's nice for us is we are really super-focused."

Cups from the Vittoria Fashion Series will be available in cafes across Australia serving Vittoria coffee during Mercedes-Benz Fashion Week Australia, May 12-18.