Where the Party Never Sleeps New Yorkers are resilient, at least when it comes to their nightclubs. As the pandemic drags on, fun-seeking locals have found creative spots to blow off steam and let loose.

While some have flouted social-distancing rules at illicit underground raves, New Yorkers who want to feel safe, and do their part to keep the city’s virus count low, can patronize bars and clubs that have found fun ways to coexist with the rules.

Under New York City guidelines, alcohol can only be served with food, masks must be worn except when seated, tables must be spaced six feet apart or separated by barriers, and indoor capacity is limited to 25 percent.

There are unexpected perks. Patrons can feel like a V.I.P. with their own bouncer. Chair dancing has become a thing. And with groups staying seated, going out now means quality time with friends. Here are dispatches from four joints. 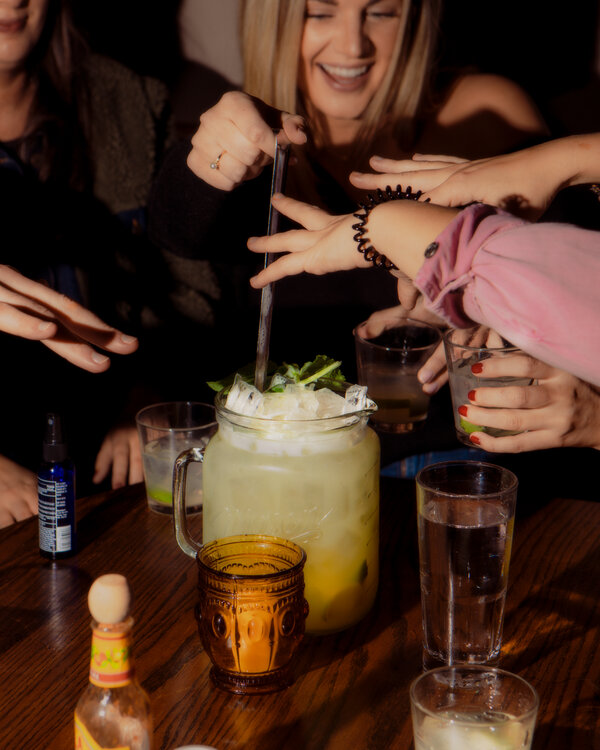 Faridah Seriki, 28, a Nigerian, Grammy-nominated singer who goes by the stage name Kah-lo, was walking down Gansevoort Street in the meatpacking district on a recent Friday night, and couldn’t believe her ears.

“This was a rare instance where songs were blasting,” she said. “You could hear it from outside, and we had to go in. I had never even heard of the place.”

From the cobblestone street, Common Ground could be confused for a sports bar. Football games play on large TVs. Groups of 20-somethings, dressed in jeans and baseball hats, sit around wooden tables polishing off buckets of canned cocktails and inhaling French fries and wings.

But inside, especially on weekends, it feels blissfully close to a pre-pandemic club. “I felt so relieved,” Ms. Seriki said. “It was a nice sliver of normalcy.”

Common Ground follows all the Covid rules: Only 43 patrons are allowed inside, a quarter of its capacity; IDs and temperatures are checked at the door; and the 2,500-square-foot club has a high-grade air filtration system, it said.

After 11 p.m., when the metal gates roll down, it feels like a den of revelry with raving disco lights. Partygoers are roped off into different corners, like separate V.I.P. areas. A bouncer is stationed at each to make sure no one is standing or mingling on the dance floor.

Still, the nonstop party music — “Mr. Brightside” by the Killers, followed by “Wake Me Up Before You Go Go,” by Wham! — made it hard not to dance. Some patrons grooved in their chairs and waved their hands wildly, which the staff have taken to call the “butt wiggle.”

When one group, a diverse crew of young professionals belting songs at the top of their lungs, were having too much fun and spilled out of their booth, the D.J. stopped the music until all had returned to their seats.

Bottles of liquors (starting at $300 for Polish Standard vodka) are served by masked waiters with a toy bubble gun. Around midnight, shots of tequila mysteriously showed up at Ms. Seriki’s table.

“We befriended them through the plexiglass,” she said, referring to the neighboring table. “If we can make friends with people 15 feet away, the vibes are good.”

While the pandemic forced most nightlife establishments to scale back, it presented 99 Scott, a sprawling event space in the industrial heart of the Bushwick neighborhood of Brooklyn, with an opportunity.

In June, it turned its backyard into Outerspace, a 7,000-square-foot open lot lined with wooden cabanas arranged around a bonfire. Its large brick warehouse was given a similar makeover. Patrons sit at wooden picnic tables separated by large tropical plants. Next door is a boneyard, with cranes jutting into the sky.

Over the summer, young partygoers, tattooed and wearing metallic sunglasses, took shelter from the sun under bright orange umbrellas and ordered rounds of white sangria while dancing at their tables. Over the Labor Day weekend, they danced to KeiyaA, a rising R&B performer, who was livestreamed from MoMA P. S. 1 in Queens.

But on Halloween night, the vibe was very different. Instead of hundreds, capacity was capped at 70 outside and 50 inside. Groups were spaced so far apart that it was hard to see anyone’s costumes.

By 8 p.m., about five cabanas were occupied by revelers, some dressed as skeletons, one as Dorothy from the Wizard of Oz. Three female friends giggled as they took selfies with the spooky decorations. Another couple hugged by the roaring bonfire as they tried to find the night’s rare blue moon.

Inside, tarot card readings were offered by Kristall Cross, a beloved fixture from Raoul’s in SoHo, but patrons were mostly seated and eating their wood-fired pizzas, bobbing their heads to a playlist by Boy Harsher, a dark-wave electronic duo.

It was more dinner party than rave, and that was OK for Jodi Blea, 49, a wellness consultant who lives in the Park Slope section of Brooklyn. “This felt like a party for the first time since the pandemic hit,” she said. “There is something about New Yorkers that want to feel like they are doing something underground and cool.”

No Sex (in the Bondage Room)

Even sex clubs are figuring how to operate during a pandemic.

On a recent Thursday, a members-only club called N.S.F.W. (it stands for New Society for Wellness) held a shibari, or Japanese bondage, demonstration at a loft on Lower Broadway. Because no alcohol is served, it is allowed to operate as long as capacity is under 50.

Members ascended the creaky metal stairs and had their temperature taken by a barefoot man in a white linen shirt. Plastic bottles were scattered throughout, but rather than hand sanitizer, they were filled with lubricant or sex toy cleaner.

Only half of the 15 people who had R.S.V.P.-ed showed up, so the clubhouse, a darkly painted apartment with shag carpeting, heavy red damask curtains and six fur-covered beds, felt empty. Members were packed tightly on a couch, a couple of pizza boxes in front of them, their conversation punctuated by awkward silences. No one wore masks, the better to smoke copious amounts of cannabis.

At 10 p.m., a burlesque performer in an orange-beaded costume did a slow striptease and twirled around a stripper pole, occasionally bending over to give the audience a full view. No one really looked up.

The club says it has more than 5,000 members, who identify their sexual interests in 86 different ways including Unicorn (bisexual woman who sleeps with couples) and Rope Bunny (someone who likes being tied up). But the loft had to close in March when the pandemic hit and did not reopen until June.

Before the pandemic, the club drew upward of 150 people. But the recent Thursday night was particularly empty, maybe because of the gusty weather and concerns about a coronavirus surge.

Dressed in a black T-shirt and jeans, the instructor hogtied a young female assistant, who wore nothing but lacy black lingerie, and hoisted her from a wooden A-frame. As he spun her around, she writhed and contorted her body in silence, her face free of emotion. About 10 minutes later, he lowered her down.

Members barely noticed. Instead they milled around, chatting and exchanging numbers, though it’s not clear if any love connections were made. None of the fur-covered beds got any use.

Halloween was canceled, but you wouldn’t know that at Gitano Garden of Love, a nightclub-esque Mexican restaurant in a large open-air lot in SoHo. Opened seasonally in 2018, it offers a jungle-y slice of Tulum in Manhattan, with tropical palms, wooden pergolas and other artisanal flourishes.

Around 9 p.m. on Halloween, the fashion designer Christian Siriano was dressed as Sia in a red tulle dress he designed, his face obscured by a blond wig. He sat in the main dining tent with a group of friends, drinking tequila and mezcal and dancing in his chair.

At another table, the actor Nico Tortorella was dressed like the supervillain Bane from Batman, with military fatigues and a realistic-looking gas mask. There were heat lamps and monogrammed blankets everywhere.

“Gitano, because they are a totally outdoor restaurant, hasn’t really had to change that much,” said Geordon Nicol, a D.J. with the Misshapes, which helped make the night’s playlist. He was dressed as a bullfighter in a red-and-black matador outfit.

Still, there were notable concessions to the pandemic. Guests had to fill out a health questionnaire on their phones and give their contact details. To minimize contact, food and drinks are ordered and paid for online. (QR codes are posted at each table.) Cocktails like the Jungle Punch are served out of a caldron by a masked waiter in a sparkling Maleficent costume.

As the night progressed, friends took selfies in front of a Day of the Dead-themed installation made of 1,000 marigolds and carved pumpkins. Couples sat under the full moon and kissed. More Jungle Punch arrived and the chair-dancing continued, with patrons flailing their hands and singing their hearts out.

“To see and be seen, you are still allowed to do that,” said James Gardner, the owner.

Gitano Garden of Love, 76 Varick Street, grupogitano.com/nyc. Closed for the season on Nov. 8.