Authorities are investigating a shooting in New York City that left an infant dead and injured three adults. Police said on Monday that the 1-year-old boy was shot at about 11:30 p.m. Sunday during a cookout near a playground in Brooklyn.

Witnesses said two men jumped out of a car and fired multiple shots at the group before driving away.

The killing comes amid a sharp spike in shootings around the city in recent weeks.

Mayor Bill de Blasio  held a moment of silence during Monday’s press briefing and said he was “heartbroken” over the violence, CBS New York reports. 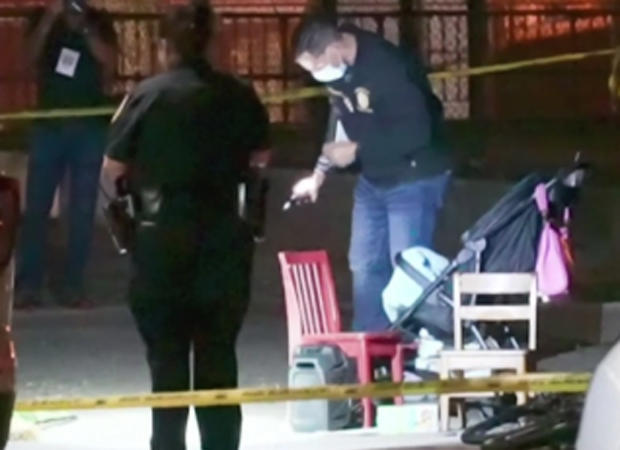 He added: “Every resource is going to be used to find this killer.”

Police said the infant was hit in the stomach while sitting in a stroller and died at the hospital. Three men were hospitalized with gunshot wounds but were expected to survive.

CBS New York reports it was another violent weekend in New York City with 22 shootings and 28 victims. Two hours earlier and nearly two miles away, another child was shot Sunday in Crown Heights.

Police said the 12-year-old boy was sitting in front of a home near Ralph Avenue and Prospect Place. He was hospitalized in stable condition.

Authorities do not believe the shootings are related. The suspects in both incidents are still at large, and the motives remain unclear.