Brian Ray, a familiar sight to Paul McCartney fans as a 20-year multi-instrumentalist stalwart in the superstar’s band, has a dream for making Palm Springs a destination on the routing of touring rockers, as well as more of a cultural hub for the arts in general. It’s a dream whose destination is well in sight. He’s helping with the already partially funded campaign to restore and reopen the Plaza Theatre, a 1936 gem that has sat unpolished, if not quite completely dilapidated, through eight years of notable dormancy right in the heart of Palm Springs’ famous shopping district.

Since he moved to the desert part-time four years ago, Ray has often thought about what could be, or what could have been, when it comes to the Plaza. It hasn’t been fit for ages to use as a hub for the annual Palm Springs Film Festival, as it was back in then-Mayor Sonny Bono’s day. But, more in keeping with Ray’s day job: “How about the mid-week shows that all the artists do when they come to Coachella? Or with Paul McCartney during Desert Trip, when we chose to go to Pappy and Harriet’s [in nearby Pioneerville] and play for about 140 people” — something he suggests could have gone down in the 800-capacity Plaza instead. “You could imagine that before that festival, Neil Young would’ve stepped into that theater and said, ‘This is where I want to do mine.’ That’s what would’ve happened if it would’ve been ready, you know?”

The Plaza is still not ready for its rock ‘n’ roll or film-festival closeup, but it’s at least in shape enough to host a concert, if lights and sound are brought in and no one looks too closely at the peeling interior paint job. So Ray is helping spearhead a benefit show by the Palm Springs All-Stars — “Rock the Plaza: Concert to Save the Historic Plaza Theatre in Palm Springs” — set to happen Nov. 11. He and his cohorts hope to help further fill the coffers in the fundraising effort, which currently has at least $7 million pledged toward a $12 million goal to turn the aging mini-palace back into a destination showcase.

Among the headlining singers on the bill are Alice Cooper, Bad Company’s Paul Rodgers and Queens of the Stone Age’s Josh Homme. The band will include drummer Matt Sorum of Guns N’ Roses, famed guitar shredder Orianthi and Ray’s partner in putting together the show, current Queen touring musical director Spike Edney.

When it comes to the starry bill for the Nov. 11 concert, some of the artists have more of a connection to the area than others. Alice Cooper has long been known as a desert rat who loves participating in golfing benefits, so an actual rock benefit isn’t much of a step away. But Josh Homme may be the participant with the longest-standing loose connection to the theater.

“When I texted Josh to ask if he’d like to be a part of this, he said, ‘Hell yeah’ — or something even more rude,” says Ray. “Josh is from the desert” — nearby Palm Desert, to be exact. “He said, ‘Look, when I was 12 and 13 years old, I would beg my mom to go to that theater to see films because it was such a fantastic place.’ Enough said, you know.”

Chris Carter, a regular presence on SiriusXM and KLOS, will host the event. Among the sponsors is Shag, the notable graphic artist whose Palm Springs designs are highly collectible among mid-century modern enthusiasts, is creating artwork for the event. (Shag already has naming rights on a bar that is being planned as part of the Plaza’s upgrade.) The creative designer for the show is well-known album cover designer and photographer Glen Wexler. Other lead sponsors are the nearby host resort, Margaritaville, which is offering special room rates for visiting concertgoers, and SiriusXM.

The city council recently had to vote on whether to approve the benefit for this year or wait until the theater had already undergone some upgrades. “There were some who wanted to wait until next year,” says Ray, “when I don’t know what my schedule is next year. My pitch was, if we’re gonna do it, I really prefer to do it now, because who knows what the future holds for me in touring with… the Beatle.” (McCartney has not set any tour plans for 2023, but he’s been on a roll, and Ray says he’s always at the ready.)

“When it was time for the vote to go forward or not a couple of months ago, I said: Palm Springs needs to be different than the rest of the world. Theaters are being turned into shoe stores everywhere you look now. We want to plant our flag into the desert soil out here and say, Palm Springs is a place where art matters, and the Plaza Theatre is going to be that flag in the sand.”

The city owns the Plaza outright and has always seemed generally supportive of keeping the Plaza alive, but the sentiment has been that restoration should come through private funding, not public money. That was easier imagined than done as the jewel sat dark ever since the 23-years-running “Palm Springs Follies” — a revue starring former showgirls in their 60s, 70s and 80s — saw its core audience finally age out of sight and closed in 2014. Earlier this year, a very serious kickstart came in the form of a $5 million donation from local resident David C. Lee, the co-creator of “Frasier.” Another $2 million came in on top of that from an anonymous donor… making the Plaza’s reopening seem like a fait accompli that is still subject to some of the whims of fate and fundraising. 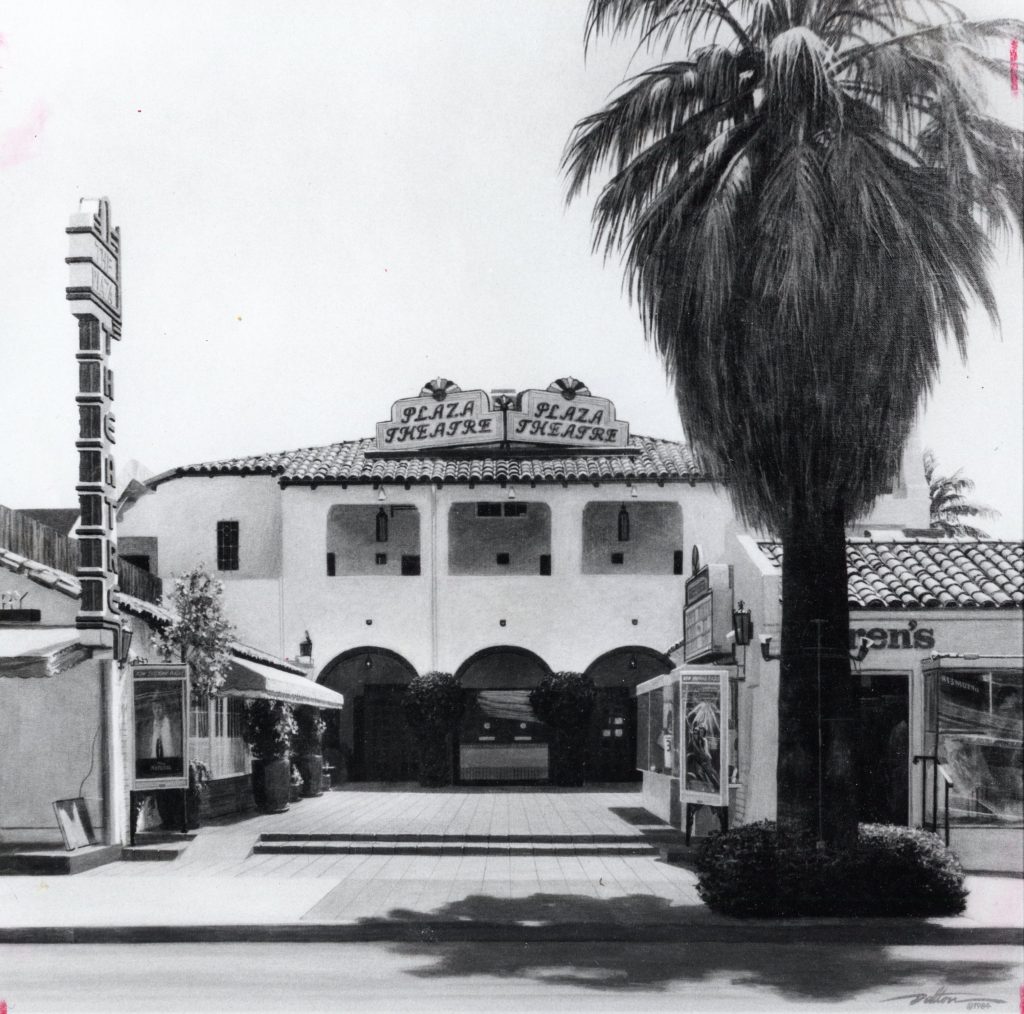 Ray got involved through his introduction to Save the Plaza founder J.R. Roberts, a former local politico “who had taken it upon himself to do one big legacy project after he’d left the city council, and that was an effort to restore this beautiful old 1930s Spanish colonial theater, dead-center right in the middle of town that was built before much of anything was here. It’s an 800-seat-cap theater that is a theme-type building when you walk into it. It’s an old Mexican village with (facsimiles of) balconies and windows on the inside and an infinity twinkling-star ceiling” — aka an atmospheric, as they’re known in the historic-theater trade.

The Plaza opened in December of 1936 with the premiere of the Greta Garbo film “Camille.” Many other films had their premieres there over the years, as Hollywood adapted Palm Springs as an easily accessible playground where the stars kept their second homes. Numerous national radio broadcasts also emanated from the theater. After coming into use as one of the homes for the city’s burgeoning film festival in the ’80s, the Plaza ceased film operations in 1989, and the “Follies” show moved in the following year. But since 2014, it has sat all but forgotten by a few stalwarts determined not to let a city that many have practically thought of as a suburb of Hollywood be theatrically represented only by multiplexes, even at its signature film fest.

“Because it’s owned 100% by the city, it doesn’t need to make a profit, but they also don’t want to lose money,” Ray says. “They want to support the arts but they also don’t really want to pay for the restoration, and because it’s been dormant for about eight years, it just really needs plumbing, electrical, a slap and a tickle for the way it looks, improving the lobby and so on. It will house comedy, theater, film festivals and, yeah, rock ‘n’ roll too, and it’s going to be a world-class, modern theater when it’s all done.

“The building itself, structurally, is perfect,” Ray continues. “It’s signed off to have events in there. It hasn’t been really loved in a while. There is no sound and lights in there. I pulled a lifetime of contacts and vendors, musicians and friends together for this cause. And now we have Clair Global, which does Paul McCartney and Queen, doing audio, bringing in a full system, monitors, in-house sound, and they’re donating it — it’s the best you can get. And then similarly, I approached a lighting company out of L.A. called Volt Lites, and they cut us a similar crazy deal and they’re cutting edge, the best lighting in town.” As for the infrastructure: “All the seats are in place in the theater, so it actually looks nice when the lights are down, but you turn the lights up and … it’s a ’20-footer’ — you know, one of those things that looks good from 20 feet. But it’s gonna be fantastic. We did think about holding it in a larger venue, but, you know, ‘Rock the Plaza’ at a ballroom — it’s not as cogent as doing it in the room that you’re going to restore.”

Some tickets for the Nov. 11 concert are still available and start at $175. Ticketing and lodging info can be found at savetheplazatheatreps.org. A silent auction will also take place and include such items as signed Brian May, Adam Lambert and Alice Cooper guitars and signed Nancy Sinatra go-go boots.