Deputy Prime Minister Barnaby Joyce is poised to appoint a former regional mayor from his NSW electorate of New England as chairman of the federal government’s independent infrastructure advisory panel on a six-figure salary.

The Opposition used Federal Parliament on Tuesday to attack Mr Joyce’s links to Col Murray, who retired after 11 years as mayor and four terms on the Tamworth Regional Council earlier this month, accusing Mr Joyce of showing “contempt for impartial infrastructure advice”. 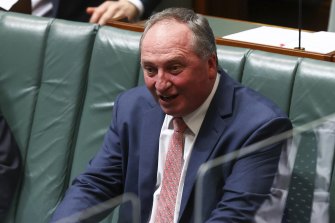 He is expected to be announced as the chairman of Infrastructure Australia, an independent statutory body that provides research and advice to all levels of government and industry on projects and reforms relating to investment in infrastructure, on Thursday. The body’s latest list of priority projects, announced earlier this year, had a combined value of at least $59 billion.

Mr Murray, who told magazine The Monthly last year that he was “a fairly solid Barnaby supporter”, has a history in the construction industry and has chaired several regional local government lobby groups during his career in local government. He is also on the board of the University of New England.

She said her side of politics had established Infrastructure Australia to provide impartial advice to governments and industry across the country.

“Under law, appointments to the Infrastructure Australia board must be based on skills and experience in the field. Last time I checked, supporting Barnaby Joyce was not in the selection criteria.”

“What is wrong with the former mayor of Tamworth? Does he not have quite enough letters after his name to be considered worthy by the Labor Party; a person who was one of the leading mayors in New South Wales; a person who has underpinned the growth of one of our great regional cities?” Mr Joyce said.

Mr Joyce told Parliament that Labor was now “sneaky snobs” who believed “unless you are endowed with more letters after your name than the alphabet, they say that you are not good enough”.

“They don’t believe in people who’ve done an honest day’s work standing in a private business, building it up and then going into community service as a senior mayor of a senior regional city in Australia,” he said.

Mr Murray’s councillor biography says that during his terms as mayor, he presided over several major local infrastructure projects, including an $80 million wastewater treatment plant and effluent reuse farm, a street beautification project in the Tamworth CBD, a six-year upgrade of Manilla Road and the Tamworth Rail Freight Intermodal Terminal.

Earlier this year Mr Murray was involved in a public slanging match with former NSW deputy premier John Barilaro, after the then-state Nationals leader dubbed him an “ungrateful mayor” following his criticism over funding of water security and Dungowan Dam.

He gave a hint at his new appointment on ABC New England earlier this month, saying he had a “fairly high profile, high-level board” appointment to be confirmed “over the next week or two”.

Mr Murray will replace Mark Balnaves, who has been acting in the role since Julieanne Alroe, the former CEO and Managing Director of Brisbane Airport Corporation, left last year. The appointment attracts a $130,000 salary.

When contacted by this masthead on Tuesday, Mr Murray said he was unable to comment on the matter until later in the week.