Prime Minister Scott Morrison has received a hero’s welcome at the Devonport Strikers soccer club – even after accidentally shoulder charging one of the club’s young players.

Morrison shed his suit jacket and got in amongst it moments after arriving, showing off some not-so-fancy footwork as the kids cheered and one declared him “Better than Ronaldo”. 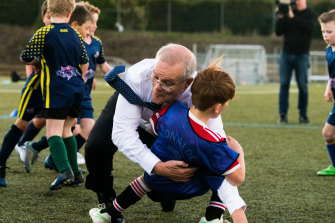 The prime minister accidentally bowls over a child while playing with the Devonport Strikers on Wednesday.Credit:James Brickwood

At least until he accidentally tackled young Luca, who was unsighted on his left.

After kicking the ball around for a bit, Morrison addressed the kids – and their Mums and dads – in the club’s rooms.

“Where’s Luca, where’s Luca? He’s probably gone off to hospital!” The PM joked after the accident, to a big roar.

The club told the Herald and the Age that Luca, who is six or seven, was up and running around after the tackle, and went home after finishing training.

Morrison also told the club members that “I look forward to coming back on another occasion. I think that when that grandstand comes down, I hear it might need a bit of a bulldozer to knock it down, so I might be able to help with that.”

Morrison is promising $3.5 million for a new grandstand, upgrades to the pitch and lighting.