DOMINIC LAWSON: Russia’s forces are approaching mutiny – and when that happens, Vladimir Putin goes the way of the Tsars

Few nations have as deep a sense of their own history as the Russians. Indeed, it was on the basis of a tendentious tract about the historic ‘unity’ of Russians and Ukrainians that President Putin justified his invasion of an independent neighbouring state.

But another word, also with great resonance in Russian history, now hangs over the Kremlin’s flailing military campaign. And that word is: Mutiny.

Remarkably, it was raised on Moscow’s main TV channel last week by the woman described as Putin’s propagandist-in-chief, Margarita Simonyan, during the nightly discussion programme on the state of the ‘special military operation’.

The striking-looking Simonyan is the head of RT, the Kremlin’s English-language broadcasting network (now banned in the UK); but here she was speaking to a Russian audience. 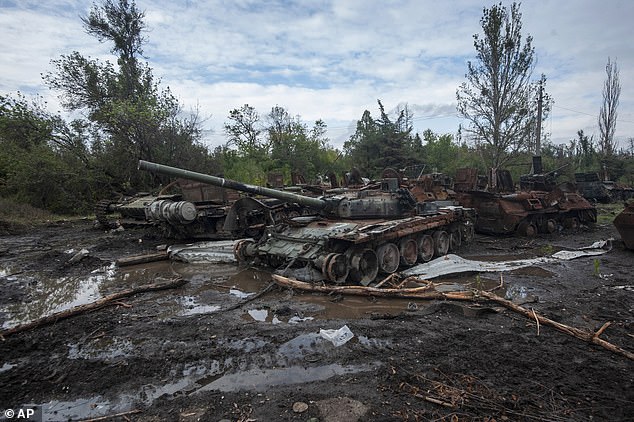 Morale is desperately low, even before still worse-equipped and less battle-ready forces are pressed into fighting a Ukrainian army furnished with some of Nato’s most lethal weaponry and which has recently achieved stunning victories

She was raging about the incompetence with which Putin’s ‘partial mobilisation’, announced on September 21, was being carried out, and the gross inadequacy of the provisions being supplied to the hundreds of thousands being called up to fight: ‘Students, people with serious illnesses, single mothers, people as old as 62 . . . and being handed rotten things, no helmets or body armour.’

She warned the heads of the armed forces: ‘Comrade Commanders: don’t anger the people!’

And now came the reference to historic precedent. Simonyan told the ‘commanders’ to remember the mutiny on the Battleship Potemkin during the Russo-Japanese war of 1905, which was provoked by the fact that all the meat available to the crew had been maggot-infested.

‘Let me remind you that in 1905, small things like that led to the first mutiny of an entire military unit in the history of our country. Is that what you want?’

She exempted Putin from all criticism, of course, and praised her ultimate boss for taking ‘the very heavy load of responsibility solely upon himself’. I doubt that would have comforted the increasingly deluded occupant of the Kremlin.

Like the invasion of Ukraine, the 1905 Russo-Japanese war saw the much larger country suffer from a series of blunders based on an exaggerated sense of its own military capability — and, to some astonishment, the Japanese won. 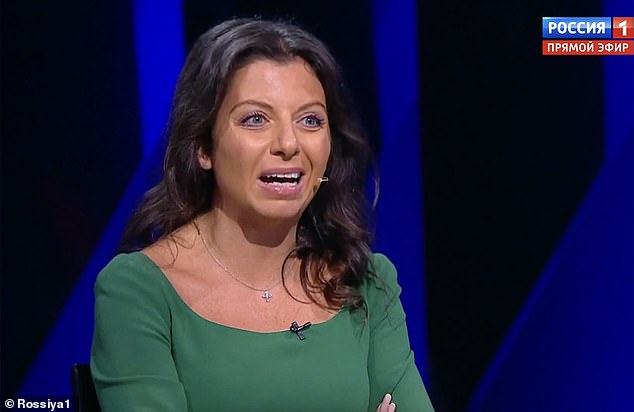 Another word, also with great resonance in Russian history, now hangs over the Kremlin’s flailing military campaign. And that word is: Mutiny. Remarkably, it was raised on Moscow’s main TV channel last week by the woman described as Putin’s propagandist-in-chief, Margarita Simonyan, during the nightly discussion programme on the state of the ‘special military operation’

The Potemkin mutiny was put down, but the privations and humiliations linked to that conflict led to uprisings in Russia itself — known as the 1905 Revolution. The result was that the Tsar was forced to concede political reforms, including the inauguration of multi-party elections.

Lenin and the Bolsheviks saw the Potemkin mutiny as an inspiration for their own seizure of power in 1917.

They commissioned the Soviet director Sergei Eisenstein to make a film about this historic event. Battleship Potemkin, first screened in 1925, became the totemic account for the masses of why ‘the workers’ rise up against the oppressive commands and callousness of their masters. In 1917, there were occasional mutinies among the ill-equipped Russian army, almost two million of whose soldiers perished in the Great War. But the mutiny that did for Tsar Nicholas — who had taken personal command of the army in 1915 — was in the garrison in Petrograd (now St Petersburg).

The soldiers refused to obey the Tsar’s orders to suppress uprisings in that city, and, in short order, a ‘provisional government’ was set up, with the Tsar abdicating the following day, March 15. 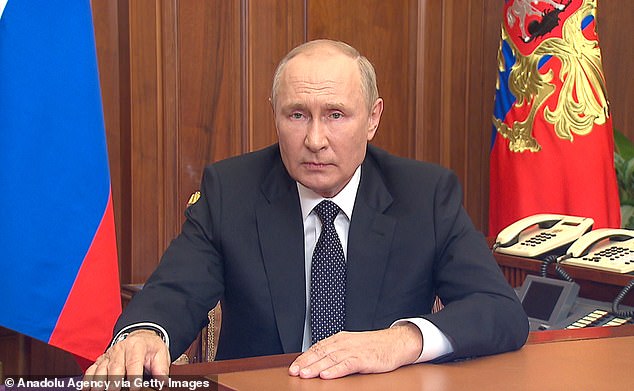 The reason Putin, with evident reluctance, felt forced to call up hundreds of thousands more is that so many of his best troops had already been slaughtered

It was the next year that Nicholas II and his family met their grisly fate — shot dead and bayoneted by the Bolsheviks.

The revolutionaries’ overthrow of the provisional government was, again, assisted by mutiny among the army, whose troops had been won over by Lenin’s promise to abandon the war.

Clearly, the slaughter in Ukraine is on nothing like the scale of World War I. But the reason Putin, with evident reluctance, felt forced to call up hundreds of thousands more is that so many of his best troops had already been slaughtered.

Morale is desperately low, even before still worse-equipped and less battle-ready forces are pressed into fighting a Ukrainian army furnished with some of Nato’s most lethal weaponry and which has recently achieved stunning victories.

It is not sympathy with the people of Ukraine that has caused tens of thousands of able-bodied Russian males to flee the country over the past week, but fear that they, too, once conscripted, would soon become part of the next layer of corpses on Ukrainian soil.

And in Dagestan, a republic in which 99 per cent of the population had supposedly voted for Putin, and where a disproportionate number of young men have been called up, there have been demonstrations by mothers holding banners declaring: ‘Our children are not fertiliser!’

Last week, the New York Times published extracts from thousands of intercepted personal calls made in March by Russian troops as they were forced back from the suburbs of Kyiv.

The NYT had been passed the recordings by the Ukrainian security agencies, but published them only now because the paper had spent months checking that all the phone numbers and identities were genuine. Here is a selection, edited to take out some of the (understandable) profanities. Nikita, to his mother: ‘Sixty per cent of the regiment is gone already.’ Yevgeny, to his partner: ‘No one is left from my Kostroma regiment.’

Sergey, to his mother: ‘There were 400 paratroopers. And only 38 survived … because our commanders sent soldiers to the slaughter.’ Sergey to his girlfriend, explaining why they’d shot their captives in Bucha rather than keep them as prisoners: ‘We would have had to feed them, and we don’t have enough food ourselves.’

A similar selection had been published a month ago by the Kyiv Post, which gave more details of the fury of Russian troops with their own officers (very much in the spirit of the Potemkin mutineers).

They talk about flatly refusing to fight — which helps explain why thousands of Russian troops had simply fled from Ukrainian forces in the Kharkiv region, leaving vast amounts of munitions and armour behind them.

An intercepted call dated September 2 reveals a Russian soldier telling a relative: ‘In our unit, they’re going to get together, they’re going to go to [the senior commander] Zavatsky, and lay down their arms … all the infantry, it looks to me, they couldn’t give a s*** any more about anything.’

Other recorded conversations between Ukrainian soldiers show how surprised, and even shocked, they had been by the ease with which they had killed the Russian invaders: the most recent one involves the battle for the control of the strategic hub of Lyman in Donetsk, which Ukraine recaptured over the weekend.

This was especially humiliating for Putin, as he had only just declared that region to be a part of Russia, following one of his phony referendums.

What follows is harrowing: ‘Lots of dead Russians. Like hunting squirrels in a pecan orchard . . . We cut them down before they knew what was happening. They had little ammo, no med kits, very little food . . . I came away shaking like a leaf, not scared, just ‘wired’ and sick of killing people.’

By all accounts, Putin, who has increasingly taken personal control of military planning, à la Nicholas II, had resisted his officers’ request to retreat earlier from Lyman. This latest slaughter of Russians is on him, and him alone, even if Margarita Simonyan and others of the Kremlin’s propagandists continue to claim that the setbacks — to put it mildly — are the responsibility of the ‘commanders’ rather than the Commander-in-Chief.

But her warnings of ‘mutiny’ and even a ‘Potemkin’ moment — rooted in some of the most tumultuous episodes of Russian history — are the augury of the end of this war, if not of Putin’s fall.

Russia’s troops are not just short of food and the most basic equipment; in the recent call-up, they have even been told to take their wives’ and girlfriends’ tampons for putting in any wounds they receive, as no tourniquets are available.

Putin sees himself as the successor to his country’s most revered rulers — notably Peter the Great — in restoring what he regards as territory rightfully Russia’s. Instead, he faces the fate of the last of the Tsars.