Rochester police commanders urged city officials to hold off on publicly releasing body camera footage of Daniel Prude’s suffocation death because they feared violent blowback if the video came out during nationwide protests over the police killing of George Floyd, newly released emails show. Deputy Chief Mark Simmons cited the “current climate” in the city and the nation in a June 4 email advising then-Chief La’ron Singletary to press the city’s lawyers to deny a Prude family lawyer’s public records request for the footage of the March 23 encounter that led to his death.

The video, finally made public by Prude’s family on Sept. 4, shows Prude handcuffed and naked with a spit hood over his head as an officer pushes his face against the ground, while another officer presses a knee to his back. The officers held him down for about two minutes until he stopped breathing. He was taken off life support a week later. 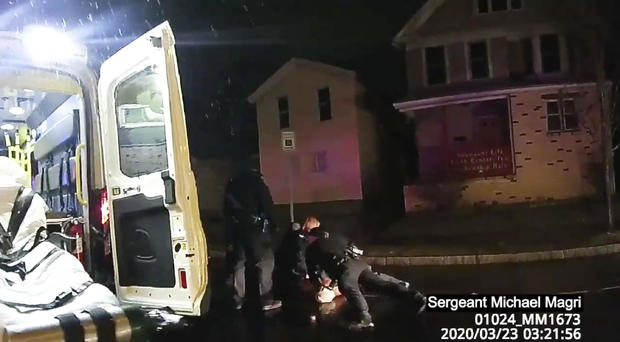 “We certainly do not want people to misinterpret the officers’ actions and conflate this incident with any recent killings of unarmed black men by law enforcement nationally,” Simmons wrote. “That would simply be a false narrative, and could create animosity and potentially violent blow back in this community as a result.”

Simmons’ email seeking to have the city deny the Freedom of Information Law request echoed emails from other police officials worried about releasing video of the March 23 encounter as demonstrators were taking to the streets of Rochester and elsewhere to protest Floyd’s May 25 death in Minneapolis and other police killings of Black people.

Lt. Mike Perkowski told a city lawyer on June 4 that he was “very concerned about releasing this prematurely in light of what is going on” and Capt. Frank Umbrino told another police official “any release of information should be in conjunction with and coordinated with the Mayor and the Chief as it very well have some intense ramifications.”

Simmons forwarded both emails to Singletary with his message advising the chief to have the Prude family lawyer’s public records request squashed, according to the documents released Monday. Simmons suggested that the city deny the request because the case was still under investigation by the state attorney general’s office.

“I totally agree,” Singletary replied, according to the emails.

Later on June 4, as discussion of the records request continued, city lawyer Stephanie Prince told Curtin of a way to buy more time: allowing the attorney general’s office to show the family the video, as it has done in other cases, but not give them a copy of it.

“This way, the City is not releasing anything pertaining to the case for at least a month (more like 2), and it will not be publicly available,” Prince wrote.

Warren maintains that she did not see the body camera footage until city lawyers played it for her on Aug. 4 and that Singletary initially misled her about the circumstances of Prude’s death.

After seeing the video, Warren emailed Singletary that she was “outraged” at the conduct of the officer who pressed Prude’s head against the ground, Mark Vaughn, and that he should face an immediate disciplinary investigation.

In an unsent draft of that email, Warren excoriated Singletary for having “grossly underplayed” Prude’s death by first describing it to her a drug overdose. In the draft, prepared with Deputy Mayor James Smith’s help, Warren said she strongly believed Vaughn should be fired and that she would have asked for Vaughn’s termination in March, had she seen the footage then. She suspended Vaughn and six other officers last week.

“Quite frankly, I would have expected the Chief of Police to have shown me this video in March,” Warren wrote in the draft. The toned down version sent to Singletary did not include that criticism.

“I should have known. Everyone is right. I should have known,” Warren told WHEC-TV on Tuesday. “But this incident – an unfortunate and tragic situation – had been downplayed from the very beginning as a PCP overdose.”

A cursory management review  that Smith conducted on the city’s handling of Prude’s death found that stalling the release of the body camera video because of concerns about optics cost did “considerable damage” to work the city has done to improve relations between the police and the public.

“It is hard to rationalize how anyone who saw the video of Mr. Prude’s encounter with the RPD did not fully equate these events beyond a few mentions of bad publicity, politics, process or a ‘false narrative,'” Smith wrote. “Rochester is in desperate need of healing. We lost almost six months of opportunity to begin that process.”

Singletary announced his retirement last week as part of a major shakeup of the city’s police leadership but had planned to stay on through the end of the month. In announcing his retirement Sept. 8, the outgoing chief accused critics of trying to “destroy my character and integrity.”

Prude’s death has sparked nearly two weeks of nightly protests and calls for Warren’s resignation. His family has filed a federal lawsuit alleging the police department sought to cover up the true nature of Prude’s death.

CBS affiliate WROC reports that police officers arrived early Wednesday at City Hall to break up the protesters who have been on scene since early Tuesday morning.

Over a loud speaker Wednesday morning, a Rochester Police Department said failure to leave the area will result in arrests, but demonstrators remained on site.

“We’re going to be here, this is not going to change anything,” said Free the People and NYCLU organizer Ashley Gantt.