As Prince Harry and Meghan Markle share details of how they met during their Netflix series, Femail looks back at the Duke’s previous relationships

With Prince Harry and Meghan Markle’s Netflix docuseries landing on our screens today, many people have revelled in the couple’s revelations.

The first three episodes of the six-part series have now aired, giving viewers a look into their relationship via interviews, footage, and photographs from the couple’s archives.

Harry and Meghan’s initial dates are covered in the episode released on December 8, with the couple revealing that the Duke was initially interested in the former Suits actor when he saw her on a friend’s social media feed.

Other anecdotes shared by the Duke, 38, and Duchess, 41, include a story about Harry being embarrassingly late to their first date, and Meghan agreeing to spending a week with him in Botswana for their third. 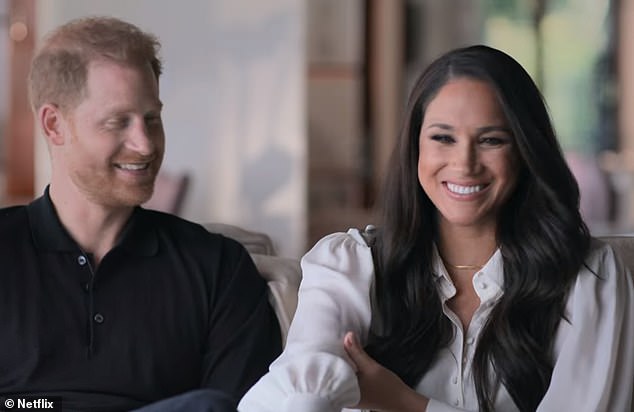 The episodes detail how the couple had a long distance relationship in the early days, describing how Meghan, the then actor, would fly across the Atlantic from her home in Canada, where she was filming Suits, to spend time with the Prince, who had commitments in the UK.

Harry also opens up about how difficult it has been to sustain relationships in the past, citing public and press interest in his former partners as a major obstacle, with some of his exes deciding they did not want to be under the spotlight.

Before the royal tied the knot with Meghan, he dated a number of women, including some well known faces.

Among them was UK-based singer Ellie Goulding, 35, who Harry is reported to have dated before meeting Meghan Markle in the summer of 2016. 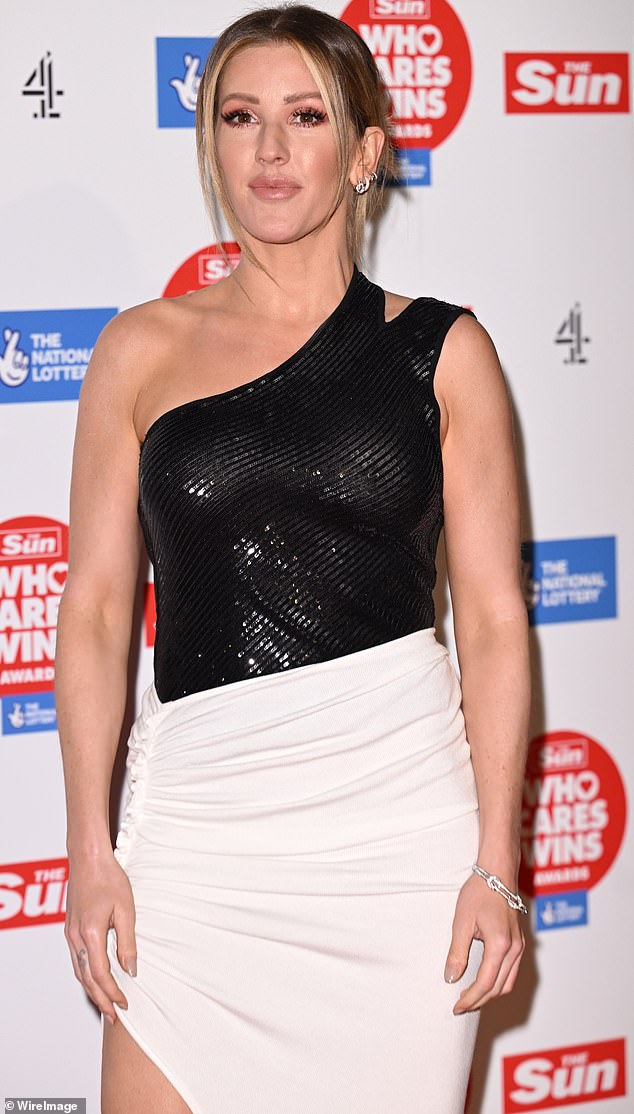 Before Harry met Meghan he had a brief fling with singer Ellie Goulding (pictured), who he had been friends with since 2011

Described as a ‘fling’, the couple’s most notable outing was at the Audi Polo challenge in Coworth Park, Berkshire, with onlookers saying that the couple were ‘all over each other.’

It is thought that Harry had been friends with Ellie since they met at Prince William’s wedding in 2011.

The singer went on to married Caspar Jopling, 30, in 2019 and the couple share a one-year-old son, Arthur Ever Winter Jopling.

Witnesses said the royal took the then 29-year-old actress by the hand for a private chat after the Audi Polo Challenge at Coworth Park in Ascot.

One onlooker told The Sun: ‘It looked like they were really enjoying each other’s company.’

This was two years after Harry’s relationship with actress and society girl Cressida Bonas, 33.

Cressida and Harry were together between 2012 and 2014, and many people thought that they would end up getting married. 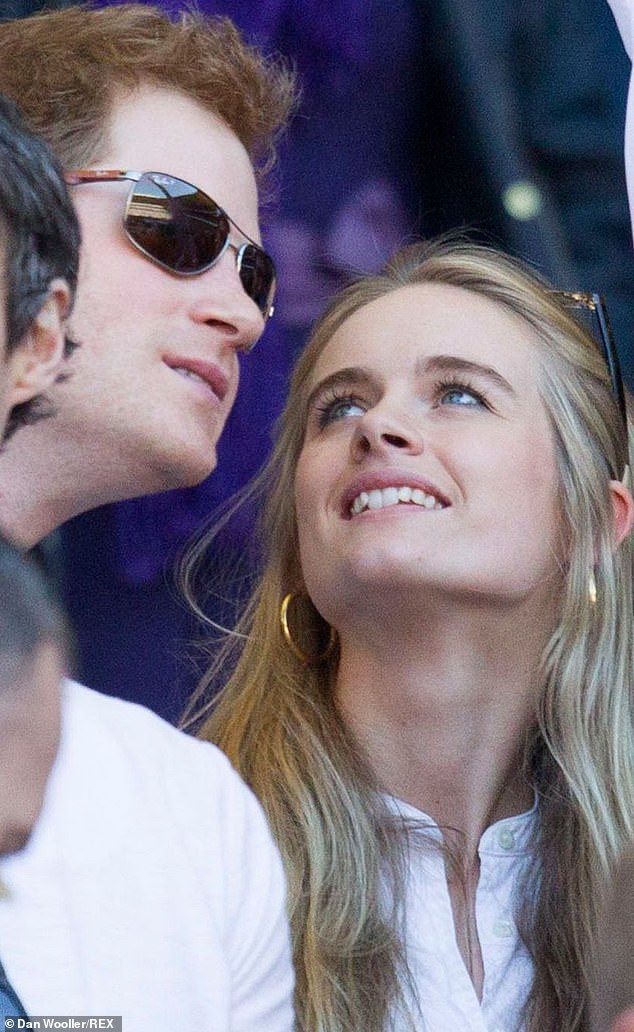 Cressida Bonas (pictured with Prince Harry) was the woman many presumed would become Prince Harry’s wife, before they split in 2014

With a wedding thought to be on the way, the Duchess of Cambridge was even said to be helping shy Cressida learn how to handle to the intensity of the royal spotlight.

But the actress later dismissed all that as mere ‘noise’, explaining in an interview: ‘All that stuff is not real. It’s really important to remember that all it is noise, noise that can be very loud at times.’

She slotted into the royal family well and is friends with both Princess Beatrice and Eugenie, the latter of whom is said to have introduced her to Harry in 2010.

According to the BBC, Harry and Cressida split up because she wanted to focus on her acting career, though it was also speculated that media scrutiny led to the end of their relationship.

Cressida went on to marry her husband Harry Wentworth-Stanley in 2020, and the pair a share a baby, who they were seen pushing in a pram around London last month.

Before his relationship with Cressida, it was rumoured that the Prince had a fling with singer Mollie King, 35 in 2012.

The pair met at a polo match in 2010 and were pictured partying together at Public nightclub and Bunga Bunga karaoke bar in London.

Before Cressida, Harry had a fling with singer Mollie King (pictured) in 2012. They were introduced by his cousin Zara Phillips

They were allegedly set up by Harry’s cousin Zara Phillips, who is a friend of the pop star’s Saturdays bandmate, Una Healy.

It was reported Harry broke things off with the singer after a few months because she was too open about their relationship.

The Duke of Sussex has also been linked to Florence Brudenell-Bruce, with the pair reportedly dating in 2010.

According to friends,  the lingerie model and society star – who is now married to business man Henry Edward Hugh St George – found the attention that came with dating a royal hard to deal with.

‘Flee hated all the press attention she got when she was dating Harry,’ a source was quoted as saying at the time.

‘She really liked him but she was embarrassed by being splashed all over the papers.’

And before Florence, there was TV presenter Caroline Flack in 2009, who called herself ‘Prince Harry’s bit of rough’, before she went on to date singer Harry Styles.

She said her and Harry were forced to call off their relationship after the ‘story got out’, and two years later she shocked fans by dating a then 17-year-old Harry Styles, who was 14 years her junior.

Details of her romances with both Prince Harry and the One Direction emerged in her autobiography, Storm in a C Cup.

In an extract, the Norfolk-born star, who died in 2020, revealed how she ‘perked up’ after being introduced to Prince Harry, 31, by their mutual friend Natalie Pinkham, a Formula One correspondent for Sky Sports.

Despite Harry’s bad boy reputation and ‘flings’ he had one very serious girlfriend between around 2004 and 2011.

Businesswoman Chelsy Davy, 37, was expected to become Prince Harry’s wife by many, until they eventually split. 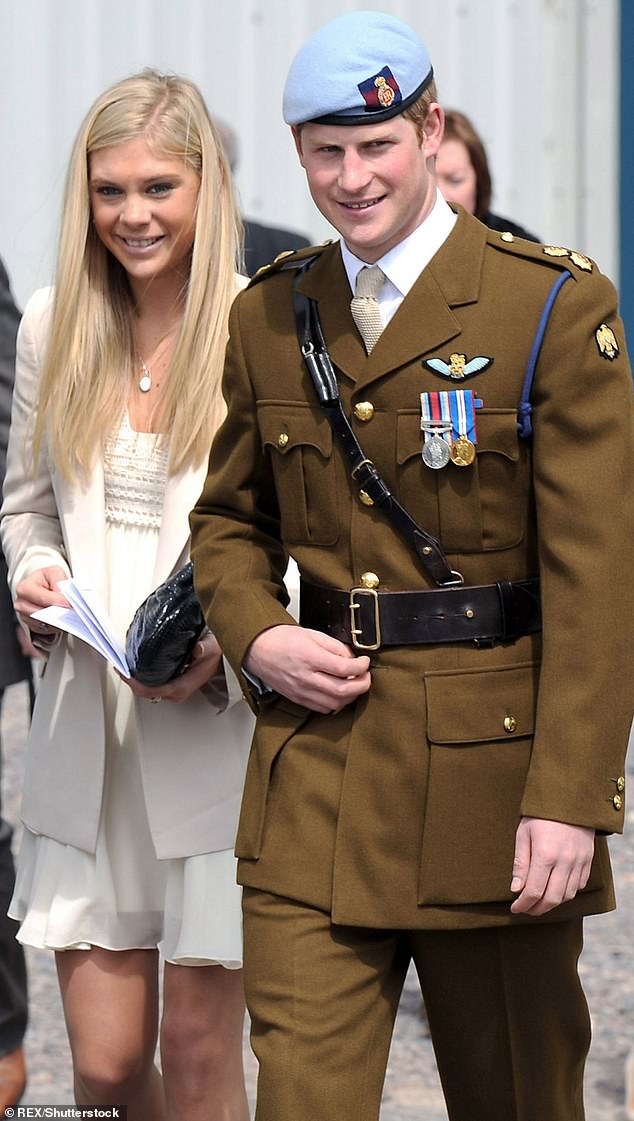 Chelsy Davy was with Prince Harry on and off for the best part of seven years. Before their split she was going to be his wife

On and off with Harry for the best part of seven years, Zimbabwe-born Davy later revealed that she ‘couldn’t cope’ with the attention and eventually retreated back to Africa for calm.

In an interview with the Times, for former lawyer revealed that being chased by photographers desperate to capture images of the couple together was terrifying.

The pair met as teenagers in Cheltenham and later got together during Prince Harry’s gap year in Cape Town.

Chelsy has said since their split that she’ll always ‘be good friends’ with Harry and was even invited to William and Kate’s wedding in 2011.  She married her husband hotelier Sam Cutmore-Scott this year. 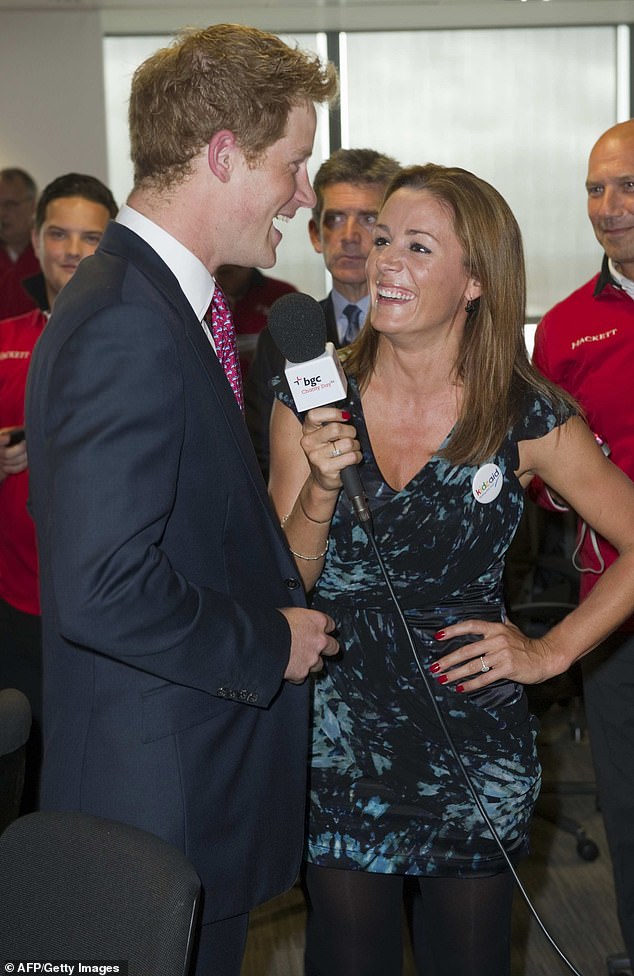 The seven-year relationship was on and off, and it was rumoured that the prince dated other women during the off periods.

According to reports, during 2006, the prince was rumoured to be dating Natalie Pinkham after pictures surfaced of the pair.

A source reported at the time that Harry was ‘absolutely infatuated’ with the TV presenter.

But the relationship didn’t blossom further and she went on to marry Endemol executive, Owain Walbyoff, and the pair now have two children.

Another relationship he is rumoured to have enjoyed was with the Princess of Wales’ good friend Astrid Harbord back in 2009.

She was spotted in the back of a car with Harry entering Clarence House by a rear gate in the early hours of the morning in 2009.

A month later it was reported that Harry had attended an illegal rave with Astrid and her sister Davina, alongside 400 other revellers in a repossessed office block in Whitechapel, East London, and the prince left the ‘Dress2Sweat’ event at 1.30am with Miss Harbord.