Fly-tipping investigators and a cleaner have Britain’s grimiest job

Britain’s filthiest jobs: Enforcement officers who fingertip-search rubbish to hunt down fly-tippers and cleaner who has to scrape faeces out of a toilet by hand leave viewers feeling ill

The grim reality of a day in the life of the people tackling Britain’s filthiest jobs has left viewers feeling sick.

Last night, Channel 5’s new show Grime and Punishment featured Wayne and Dan who dedicate their days to hunting down fly-tippers around Cardiff.

Meanwhile, Don the cleaner can tackle the country’s dirtiest bathrooms, as he has no sense of smell, which comes in handy when he has to vacuum out litres of raw sewage and scrape away faeces by hand.

Viewers who tuned in on the show last night were left disgusted by what the amount of rubbish and filth the three men had to deal with.

‘Oh god, I feel sick,’ one wrote, ‘I hope they’re on a good wage, absolutely no amount of money could get me doing that, I’d be hurling all day long,’ 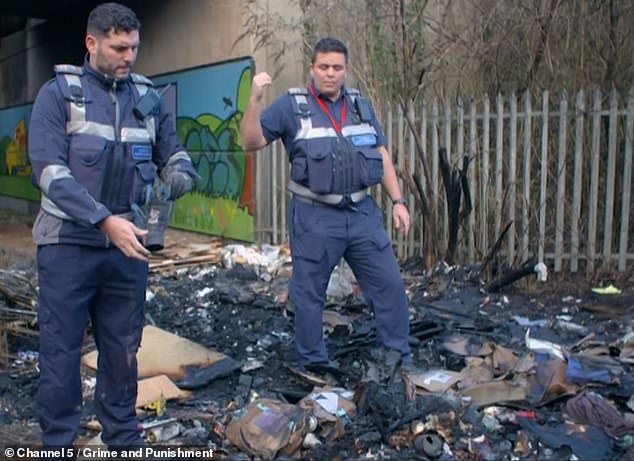 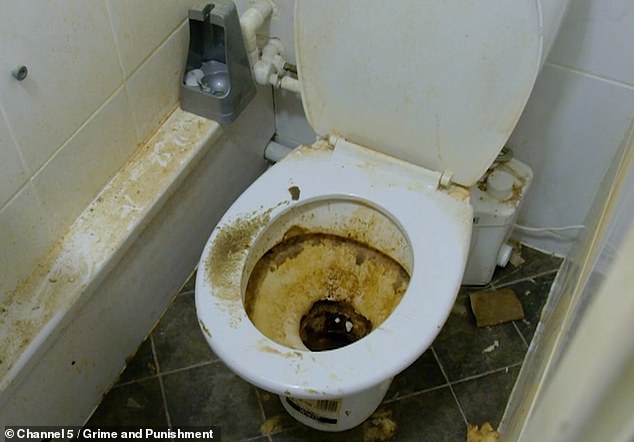 Meanwhile in Dudley, a cleaner is called for a particularly disgusting deep cleaning job that involves this toilet

‘Hats off to these lot! I could never do this job, but I fully respect anyone and everyone that does! Heroes, really,’ another commented.

In the documentary, Dan and Wayne revealed how finding fly tippers is highly challenging, as they’re usually very organised.

Fly-tipping is a criminal offence and perpetrators can face a £50,000 fine and even jail time.

Dan and Wayne have to search through piles of rubbish, looking for clues to link a  specific person to the crime. 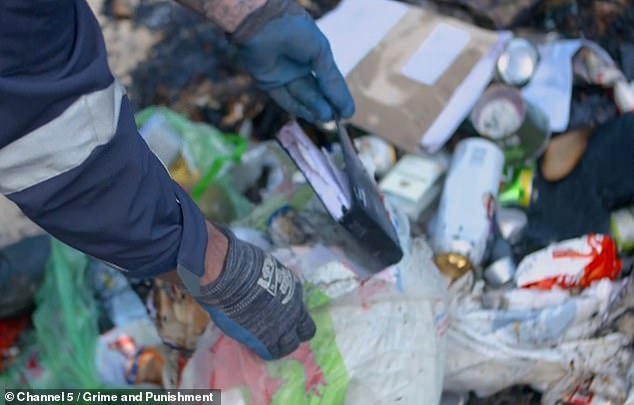 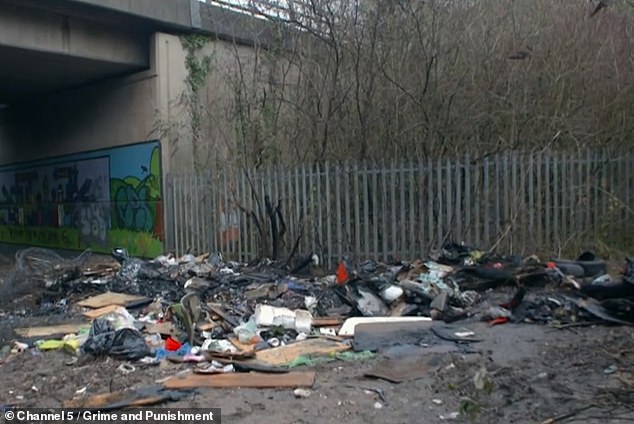 The pile of garbage that was dumped and burnt at Devil’s Ditch near Cardiff. Enforcement officers had to track the culprits down 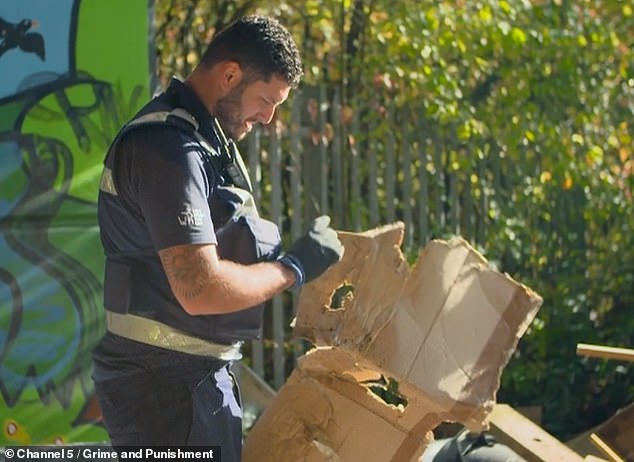 In last night’s episode, they investigated a police report of dumped waste at Devil’s Ditch, which had been burned to cover tracks.

‘I like the thrill of “maybe we’ll catch who’ve done it,’ Wayne explained, ‘but on the other side it’s like, why did they do it, how can someone be so disrespectful,’ he added.

‘You can still smell the burn from it. I imagine this has taken place in the last 48 hours,’ Dan said.

As they watched the show, viewers were impressed with the duo’s job, but noted they spent most of their time waiting around

Despite having to get his hands dirty, Dan explained that he doesn’t mind his job, after previously working in a recycling sorting centre.

‘I’m the number one enforcement officer now,’ he said proudly.

The two men had to pick through the bags of litter in order to find as many clues as possible.

One after the other they opened every bag, turned every piece of cardboard in hopes to find a name, an address, or anything that could give them a lead.

They found an address, but a quick trip back to the office found it led nowhere and the duo had to go back out to the field. 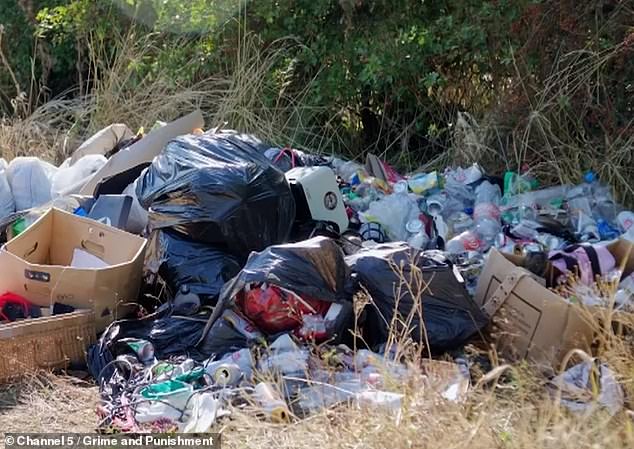 Fly-tipping is illegal and perpetrators can face a range of punishments depending on the size of the garbage they leave behind (pictured: one of the pile of garbage fly-tipped on the show) 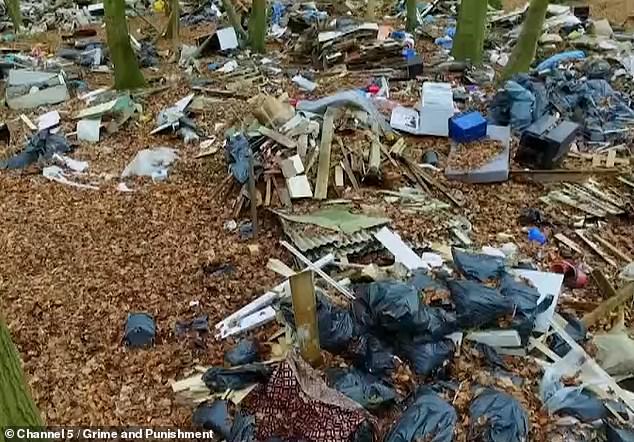 Waste enforcement officer Wayne asked himself why people show so little respect for the environment or others (pictured: a fly-tipping ground near Cardiff) 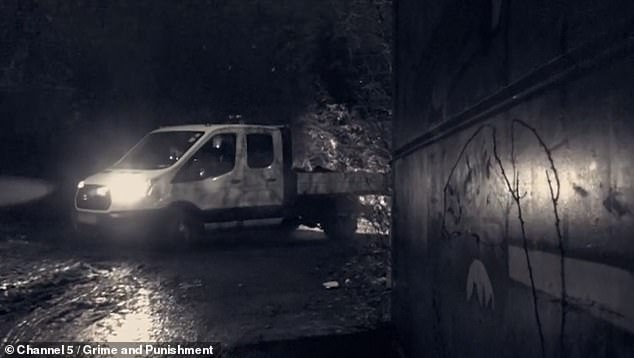 During the episode, the shock duo planned a stakeout in hopes to catch the fly-tippers red handed

Another worker who can handle the most stomach-churning tasks is cleaner Don, from Dudley.

Don lost his sense of smell in a diving accident, which is an invaluable perk in his line of work.

In the episode he was called by a building caretaker who was overwhelmed with a bathroom covered in raw sewage.

The small bathroom was covered in filth from the window to the walls, and its shower and toilet were both blocked by layers of filth. 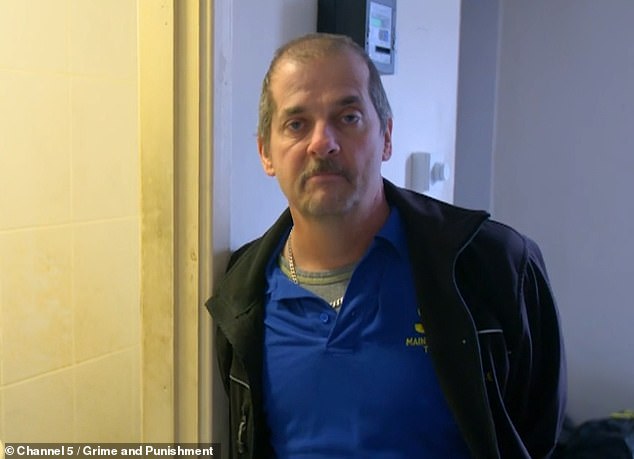 In Dudley, deep cleaner Don had to take care of a particularly grimy bathroom. He explained he lost his sense of smell in a diving accident years ago 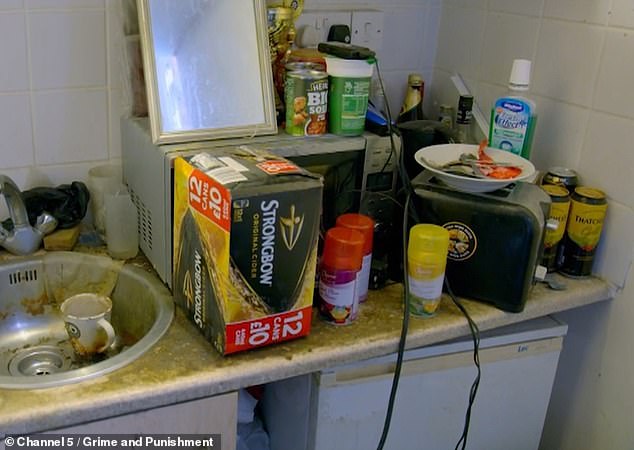 Don tackled a particularly disgusting house covered in stains. The kitchen had not been cleaned in months (pictured)

It wasn’t made clear how the bathroom reached such a state, but it appeared the tenant of the flat was to blame.

Don had to take litres of raw sewage away from the tiny bathroom. In order to do so, he first used a vacuum.

He then emptied it in another toilet, two floors up. But once he got rid of most of the waste, Don had to put the vacuum away and extract fecal matter by hand.

‘It’s not really nice but when you’ve done it as many times as we’ve done it, you can go home and eat your dinner without thinking about it,’ he said. 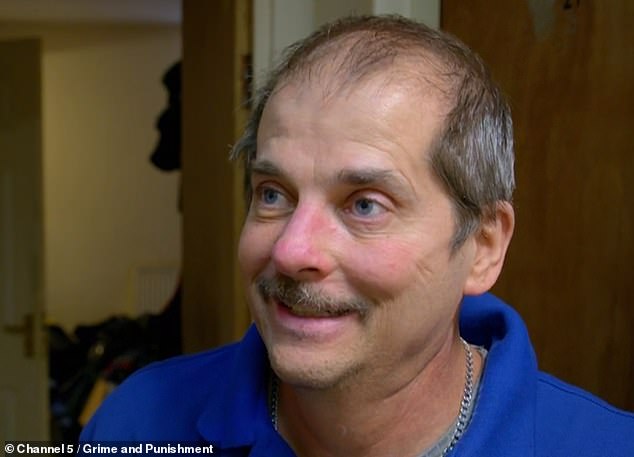 Don said he didn’t mind his job, and said not having a sense of smell was a perk in his line of work 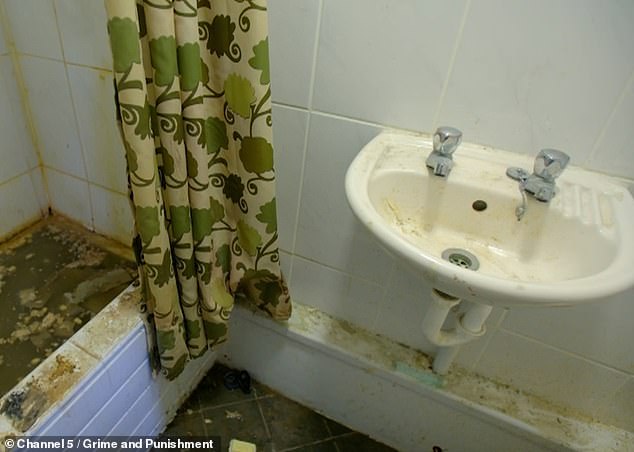 The flat’s bathroom was covered in raw sewage, even the shower (pictured) the sink and the walls 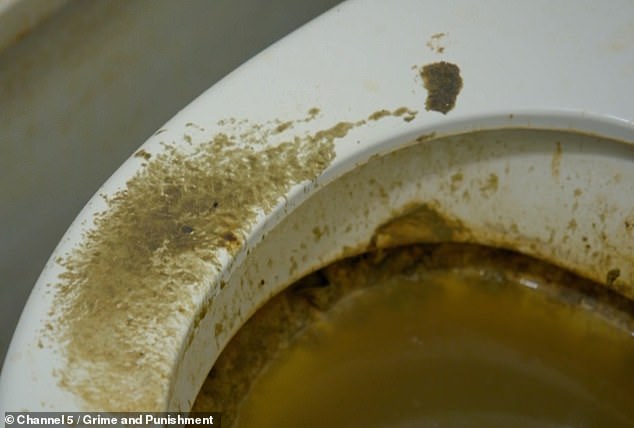 The bathroom’s toilet was filled with sewage and dirt. Don spent most of the segment vacuuming the grime out of the bathroom

However, he added his wife’s opinion might differ, sayting: ‘Sometimes I think she wants to meet me at the door with a house pipe,’ he joked.

When the job was finished, after hours of vacuuming, scrapping and swiping, Don was on his way to another job.

‘It’s gotta be super embarrassing to be handed one of those notices to have a good deep clean, especially on the TV, for everyone to see,’ one viewer observed. 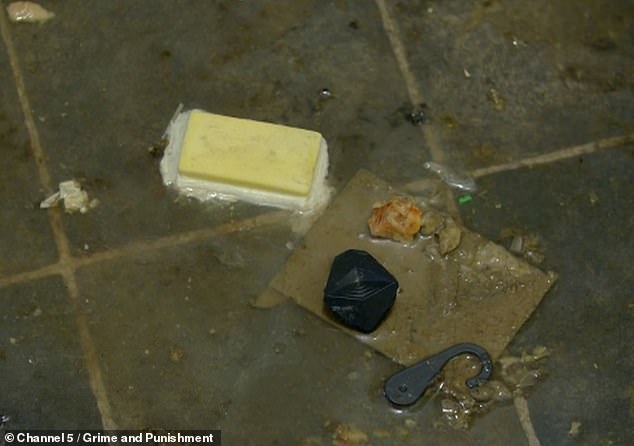 Pictured: another view at the bathroom’s floor, who was covered in different pieces of trash and sewage 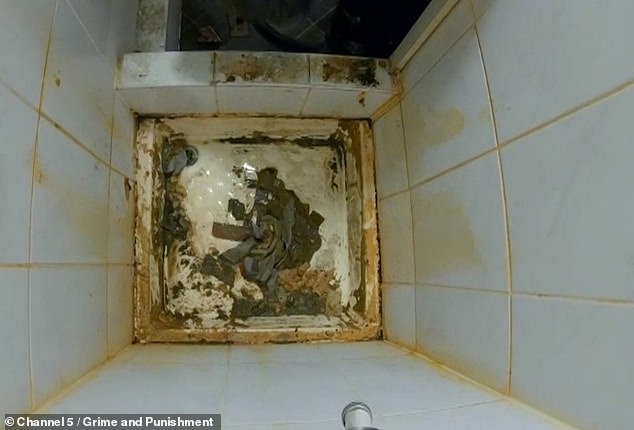 After vacuuming the sewage, Don had to tackle the rest of the trash by hand, which disgusted viewers 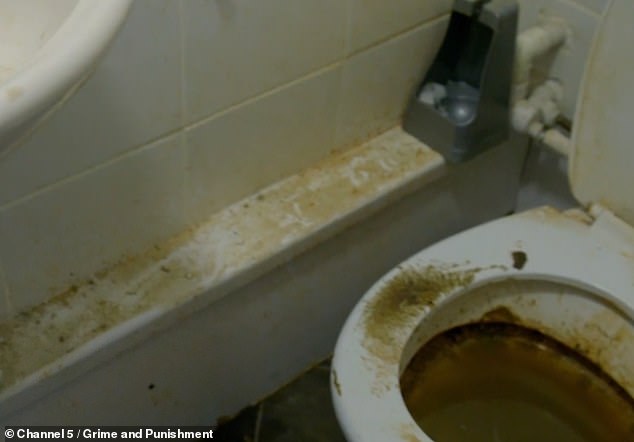 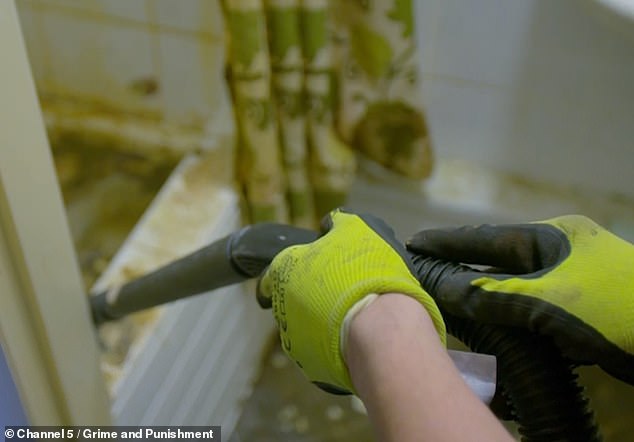 Viewers could not believe Don wouldn’t cover his arms while cleaning the bathroom, and only use small gloves (pictured)

‘How someone could live in a place where their bathroom is all blocked and covered in piss, s*** and god knows what else I’ll never know! f****** disgusting doesn’t come close,’ one wrote.

‘OMG that bathroom. Vomit. The smell must be vile.’

And viewers were as impressed by Don’s cleaning skills as they were of his apparent stoicism faced to the mess.

‘I’m shocked his rubber gloves don’t go all the way up his arms,’ one wrote.

‘Don’s got bare arms?! I would have two boiler suits on with duct tape around the cuffs and ankles,’ one disgusted viewers commented.