Home » Lifestyle » From the Archives, 1935: Not so ‘Marvelous Melbourne’

From the Archives, 1935: Not so ‘Marvelous Melbourne’

THE SLUMS OF MELBOURNE 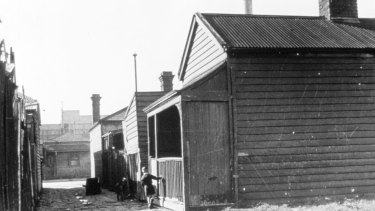 Tiny weatherboard cottages off the back streets of Melbourne.Credit:State Library of Victoria

"Bathroom !" And the woman with five children clustered around her laughed — but it was a mirthless laugh.

"Don't take it away from me !" and the old woman pensioner burst into tears as she pitifully surveyed her home two tiny rooms at the end of a blind alley.

"Do we all live here? No – we don't live" and the man's eyes blazed scorn.

"Rotten, did you say? I suppose so, but we've always lived here." And a young man unemployed for three years closed the door in front of a wife and three children.

And such-like remarks greeted the Premier and Members of the Parliamentary party during an inspection yesterday of a very small section of Melbourne's slums.

Almost Within Shadows of Parliament House 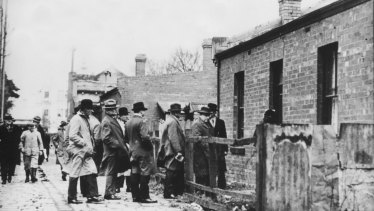 Premier Albert Dunstan and members of the Parliamentary party inspect a dilapidated house in Collingwood.Credit:State Library of Victoria

The Parliamentarians visited places unfit for human habitation within a few hundred yards of Parliament House, where squalor and pallid poverty prevailed. Some members of the official party seemed surprised that such devastating conditions existed. That was one of the many amazing and deplorable features of what can only be termed a hurried and embarrassing tour of inspection of typical parts of a large area where human beings exist under conditions of misery calculated to reduce many men, women and children to a level which is a travesty of decent life.

Every political party was represented at this inspection, but the members or the Labor party outnumbered the others by four to one. The Premier (Mr. Dunstan) seemed impressed and said "something would have to be done." The Minister of Health (Mr. Harris) seemed more impressed and said "something must be done.” The vice-president of the Australian Labor party's slum abolition committee (Mr. Holland, M.L.A.) remarked that for three years the necessity for immediate action had been vigorously pleaded.

Guided by a member of the Melbourne Ladies' Benevolent Society, several clergymen and members of the Building Industries Congress, the cars conveying the party of inspection threaded their ways through narrow lanes down the centre of which were channels choked with refuse. As the cars moved slowly through these places the people looked on wonderingly. But on no occasion was any open hostility shown. Indeed, the people in the houses visited manifested a courtesy and restraint of expression which was very impressive. 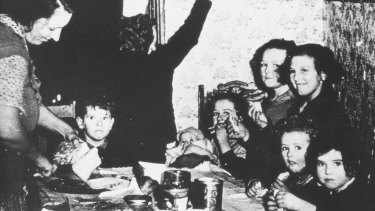 A woman slices bread for the eight children crowded around a table at meal-time. Credit:State Library of Victoria

IN A BLIND ALLEY

Features of the places — one cannot term them "homes" — were as follows:—

In Fitzroy, Collingwood, Carlton and North Melbourne — the areas touched during the inspection — the conditions were similarly conducive to moral, physical and mental degradation. 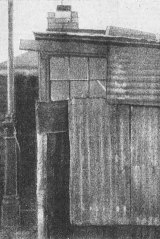 One of the “bungalows” in a blind alley for which a rental of 5 shillings a week is charged.Credit:The Age

If any area visited yesterday were to be singled out for especially dishonorable mention. It would be Fitzroy. In this area the party walked up a blind alley where tin sheds had been built-on to a dilapidated house. The occupants looked disapprovingly at the Premier and his party, and it was decided not to solicit an inspection. Ironically styled "the bungalows," these rickety tin sheds are packed with people who pay 5/ a week for the misery of living under conditions to which no decently minded man would submit a lower animal.

In only one instance was there a bath in any of the twenty-six houses inspected. In every instance the entire washing facilities for the very large families consisted of one solitary tap in the back yards. The conveniences were nauseating. The walls of the pokey rooms were crumbling away in most instances, but in a few the occupants had displayed considerable ingenuity by decorating the walls with colored papers and sacking. Some of these tiny homes showed the pride and energy of their humble occupants by the polished grates, the snowy but greatly patched bed coverings, and the only little table scrubbed till it was almost worn through. The size of these places ranged from two to four rooms, and no room was more than 10 feet by 12 feet, and in not one single instance was there the remotest chance of privacy for any member or the family. 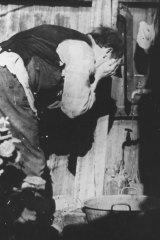 The washing facilities for the very large families consisted of one solitary tap in the back yards.Credit:State Library of Victoria

There was, however, one memorable exception. At the end of a blind alley there was a little yard with almost every patch of drabness covered with pots and tin cans filled with greenery. A well-polished step to a small doorway which led to two tiny rooms, and in one of those sat a neatly attired old woman. She trembled as the Minister of Health, in a very kindly manner, asked how she fared. "I get the old-age pension of 17/6 a week," she quaveringly told him, "and after I’ve paid the rent for this place I have 9/ left for food and clothes and other things."

Endeavoring to bring a little comfort into the old body's life, the Premier and his Cabinet colleague suggested that she might be happier in a benevolent institution, and at this the old woman took fright.

"Oh, I see," smiled the Premier as he patted her stooping shoulders, "you like to remain independent."

"No, it's not that," she replied, "but I like to be on my own. I've had to battle all along and I can't live with my son because his wife doesn't like me."

And then the dear old soul started to cry.

"Don't take the place away from me,” she pleaded as the tears fell fast, “please don't turn me out, mister !"

With great emphasis did the Premier assure her that nothing of the sort was contemplated.

She waved and smiled as the party left.

THE OWNER OF HOVELS

25 Per Cent. on His Capital

Certain houses were inspected which were rat and vermin infested, but in one instance only had the local authorities condemned a house. The weekly rental of all these awful hovels was 10/, and the majority of them had been unoccupied until the "rent sustenance" system was introduced whereby the Government pays 8/ of the 10/ rental.

“I know a man who has 150 such houses," said Mr. A. A. Calwell, who is a prominent member of the central executive of the A.L.P. "and his ‘rent sustenance' scheme gives him a return of 25 per cent. on his capital.”

Then the party went to the West Melbourne swamp, where many people have built themselves humpies from the refuse dumped on that waste land. They have to cart their water 100 yards. There are no conveniences, and the area is alive with rats and vermin from the dumps. The people there pleaded not to be evicted. “We have nowhere else to go," was their poignant comment. They considered people who lived in "real houses," like these the party had inspected, extremely fortunate! 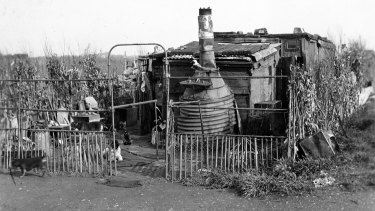 One of the tin shanties built on the Dudley Flats, the waste-grounds in West Melbourne, where many of the city’s homeless lived. Everything used in the building has been salvaged from the rubbish tip.Credit:State Library of Victoria

What the Premier Thought

Must Be a Non-Party Question

When “The Age" representative questioned the Premier as to what he intended to do, Mr. Dunstan replied, "Well, after this personal experience, I know that slums definitely exist: and that many people are living in a deplorable condition. Something will have to be done. It is terrible to think of families living this way."

The Premier was pressed for something more practical. "I realise," he said, "the local municipalities should prohibit people living in these slums, but if they are not allowed to live in these houses — where can they go? All those places should have been condemned years ago, but, as you know, local councils are swayed by certain interests. Perhaps, as you suggested, a Greater Melbourne Council working in concert with the Government might be able to speed the much needed reform. You ask me what I propose to do. Well, I shall bring the matter before Cabinet and see if we can have a conference with the municipalities to clean up this awful state of affairs. It must be made a non-party measure."

Asked if he considered that the "rent-sustenance" system was bolstering up the slums, the Premier declared. "That's what it seems to be doing. The Government is paying high rents for houses which should be condemned. The whole problem will have to be investigated."

Slum areas in South and Port Melbourne were not inspected, as the hour was late, but the Premier obtained a glimpse of slum conditions which obviously impressed him with the necessity for action. 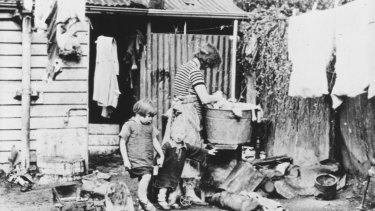 Views of the Opposition Leader

Refuting a report that because only two members of the U.A.P. were in the official party which toured the slum areas yesterday it was indifferent to the problem, the acting leader of the party (Mr. Kent Hughes) said that the party had not been invited to take part, and had appointed two of its members to represent it if they were allowed to go. The Premier, when approached, had readily agreed. The slum tour had great value as a political gesture, but was an entirely lamentable social service move.

A grand tour of the slums by fourteen motor cars was a questionable method of getting important information, and if not resented by the people concerned would at least be embarrassing to many of them. He thought that better results would have been achieved by a small, unostentatious delegation, and because of this the U.A.P. had appointed only two representatives.

Defence of the City Council's programme with respect to slums, together with some resentment of the reported criticism of the Premier were voiced yesterday by the chairman of the City Council building committee (Cr. Kane). The Premier was probably not aware, said Cr. Kane, of the sincere efforts made by the City Council towards the abolition of slums. The council had the vision to see that buildings considered respectable to-day might become the slums of tomorrow. The building regulations which the previous Government confirmed after much delay amply safeguarded the future. It was the duty of the health committee to abolish the slums of the present, and this task they were engaged upon.

An article in the current issue of the "Spectator," the official organ of the Methodist Church in Victoria states:— "We can no longer hug to our hearts the comfortable delusion that there are no slums in Melbourne. The searchlights have been turned on them, and they have been revealed in all their stark horror and squalid misery. They lie in the shadow of our beautiful city, vermin-haunted houses, fronting dark lanes — homes upon which the sun never shines. . . . This country of the poor is consecrated to the needy and greedy — greedy landlords and needy tenants.” 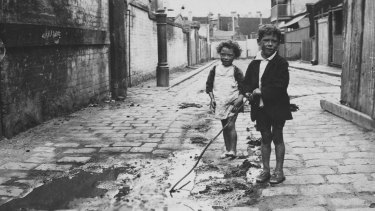 Entrance to a slum pocket known as Carlow Place, Carlton. The children are playing in runoff from a stable. Credit:State Library of Victoria