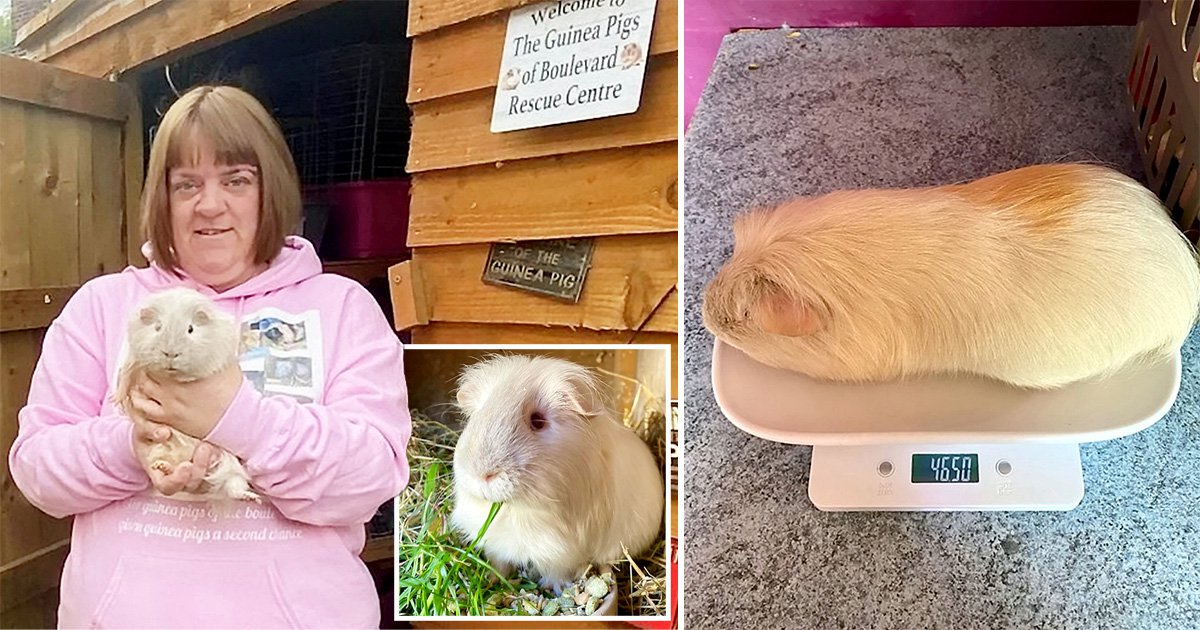 Weighing in at over three pounds, Gizmo the guinea pig could very well be the biggest of his species in the UK.

Owner Edith Rotherham says Gizmo, who’s more than twice the size of the average fully grown guinea pig, is so big he needs a hutch all to himself to stop him from crushing her other pets.

What’s more, Gizmo isn’t even a fully grown adult yet – so he’s got even more growing to do.

Edith, 44, said: ‘I feed Gizmo three times a day, curly kale, muesli, and hay, and I don’t think he eats any more than my other guinea pigs.

‘He just keeps getting bigger and bigger almost by the day.

‘About three months after I first got him, I was shocked by how much weight he was putting on and I took him to the vets.

‘The vet said he was healthy but naturally big so I just thought he must be big-boned.

‘I take him to be weighed each month just to make sure he stays healthy.

‘On his most recent check-up, the vet looked stunned and said I should contact Guinness World Records to see if he’s a record breaker.

‘He’s four years old now so he’s not even fully grown and just keeps getting bigger.’

Interestingly, there is no formal record for the heaviest or largest guinea pig, so there’s currently no record for Gizmo to break.

Edith first bought short-haired Gizmo from a pet shop in 2018, and now lives with 13 other rescue guinea pig siblings in their home in Grimsby, Lincolnshire.

‘Gizmo is one of my favourite guinea pigs,’ she said.

‘He is loving and will sit on your lap and chatter away – he’s very noisy.

‘He is also very mischievous and always the first one to grab the treats. He is nosy and likes to explore.’

Gizmo isn’t the only one of Edith’s adorable pet rodents to have been exceptional.

Her 13-year-old guinea pig Bear was almost crowned the oldest guinea pig in the UK in 2019, but he died before the record was confirmed.

The oldest official guinea pig to date is still Snowball, who died in February 1979 at age 14 and 10-and-a-half months old.