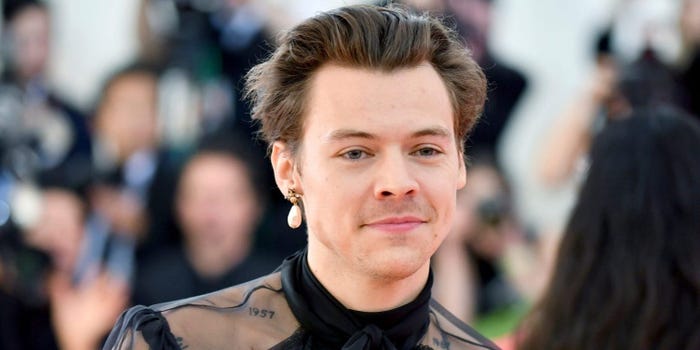 Harry Styles has made history as the first male to cover Vogue magazine solo.

The singer posed for the cover of the December issue in a Gucci jacket and dress, the latest ensemble of his to make waves. Despite the outfit's gender-bending combination, Styles told Vogue that he doesn't see it as having any meaning other than being another outlet for his creativity.

"There's so much joy to be had in playing with clothes," he said. "I've never thought too much about what it means — it just becomes this extended part of creating something."

The "Watermelon Sugar" singer told the magazine he used to look up to performance icons like Prince, David Bowie, Elvis, Freddie Mercury, and Elton John when he was growing up.

Some fans of the former One Direction member took to Twitter to gush over his style choices and the clothes he wore for the shoot.

One user acknowledged how Styles may be helping some people understand that "clothing does not have a gender."

Some even said they want to see more dresses from the singer in the future.

This December cover isn't the first time Styles has sported androgynous looks. The singer previously made headlines with a frilled see-through blouse he wore to the 2019 Met Gala.

Harry Lambert, the singer's stylist, told Vogue that the look was "about taking traditionally feminine elements like the frills, heeled boots, sheer fabric, and the pearl earring, but then rephrasing them as masculine pieces set against the high-waisted tailored trousers and his tattoos."

"I think the turning point was Harry being one of the first men to wear a full runway look from Alessandro's Gucci," he said. "It was very exciting to see everyone's responses, but also how great he looked in it. At the time it was a very bold move to make."