‘I was so scared my baby would be stillborn I gave birth blindfolded’: Mother recalls terrifying labour with premature son

A mother has revealed how she gave birth blindfolded because she was convinced her baby would be stillborn after her waters broke at just 21 weeks.

Emma Roberts, 39, from Catford, south east London, had an incompetent cervix and was on bed rest after her waters broke very early, but went into labour at 24 weeks.

Both mum and baby had sepsis, and with her son’s life in danger she said she knew she would ‘break’ if she saw him dead.

To get through the quick labour, she chose to wear a blindfold from the moment doctors told her to push.

She also kept the makeshift blindfold, made from a rolled up t-shirt, on for 30 more minutes while doctors worked on baby Jude Lami after he was born alive.

Supported by her husband James Lami, 41, who owns a ductwork company, and her mother-in-law, she even put her fingers in her ears so she couldn’t hear the worried exchanges between medics.

Thankfully Jude pulled through – but Emma didn’t set eyes on him until after she woke up from emergency surgery to deliver her placenta, three hours after he was born. 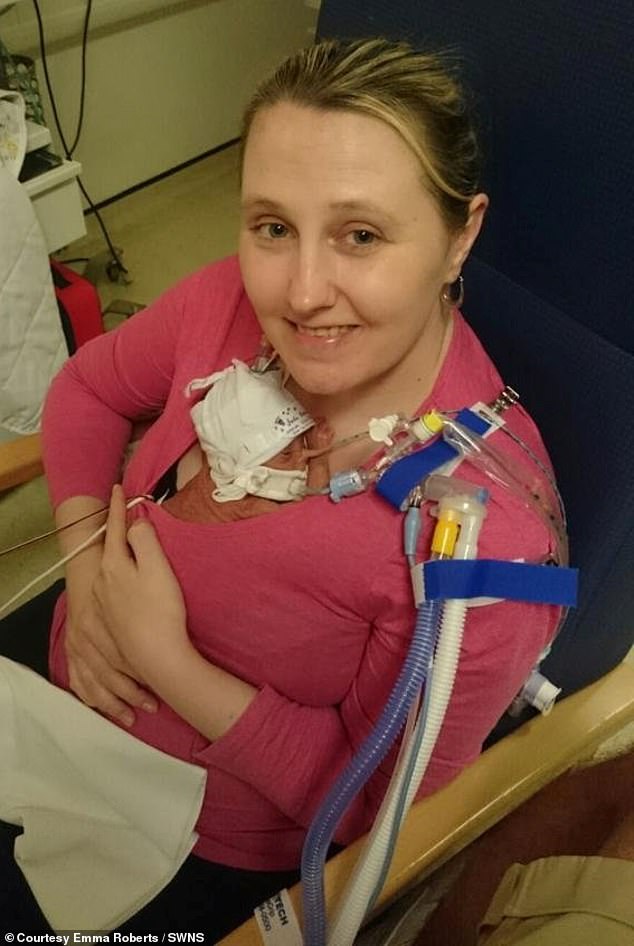 Emma Roberts, 39, from Catford, south east London, had an incompetent cervix and gave birth to her son Jude at 24 weeks 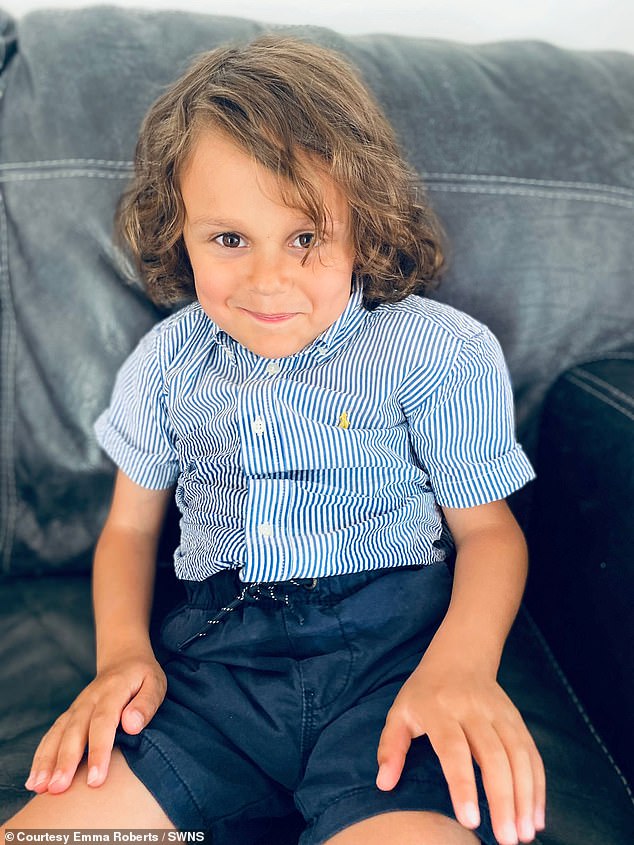 Jude, now six, has cerebral palsy and autism, but is an ‘incredibly happy child’

It was only then Emma, from Catford, south east London, fully accepted he was alive.

Jude, now six, has cerebral palsy and autism, but is an ‘incredibly happy child’.

Emma’s mother Kim died after giving birth to her little sister, fuelling her anxiety – even before she found out her son was going to be very premature. 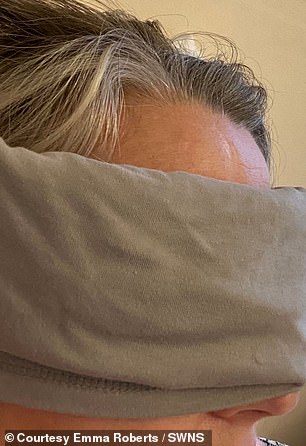 Emma said that she knew she’d be ‘broken’ if she had to see the body of her son, and put on a blindfold as soon as she was told to push

Emma said: ‘I wanted to be blindfolded because I didn’t want to see him dead as I knew how upset I would be.

‘I just needed something to cover my eyes so that I couldn’t see what was going on. I suppose if I could have seen, then I would have run away.

‘I’m quite a worrier and I just didn’t want to see him dead because I think it would have broken me.

‘I like to fix a problem, but in that, you have to just hand it over to the professionals and there was nothing I could do to make it better.

‘As I didn’t have that control, I just had to completely take myself out of it.’

When Emma was 20-years-old, she had precancerous cells on her cervix lasered away – which she says can cause an incompetent cervix.

When she fell pregnant in 2016, at 19 weeks pregnant, doctors discovered she had virtually no cervix, meaning her baby could be born at any moment.

Emma had an emergency stitch put into her cervix at 19 and a half weeks pregnant but her waters still broke a week later. 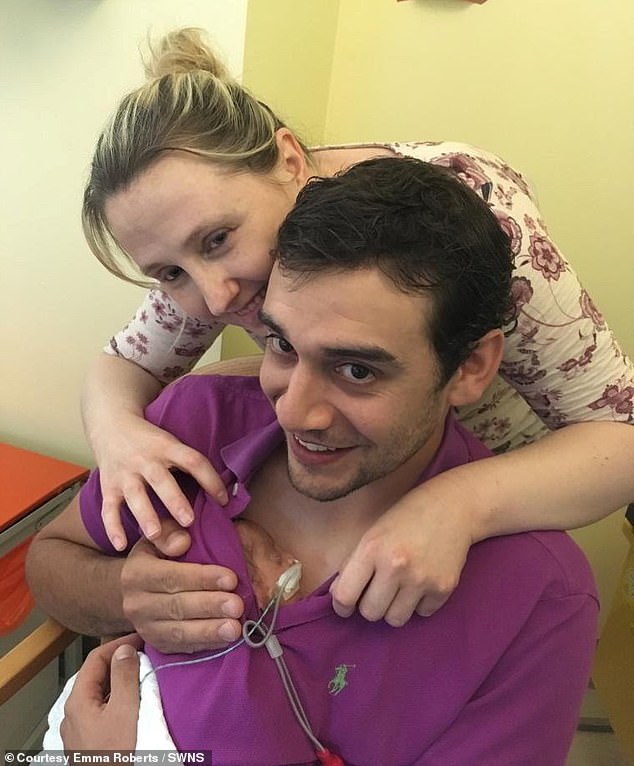 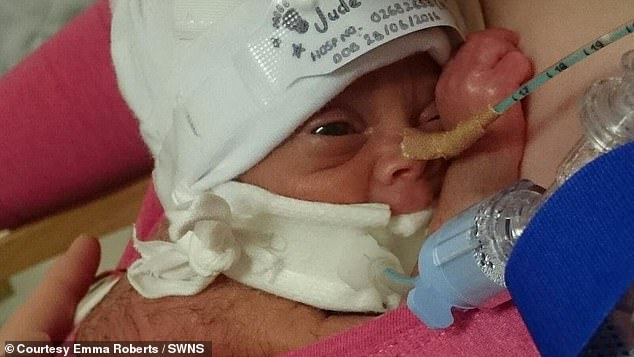 Emma and her baby both caught sepsis and doctors were forced to induce her at 24 weeks.

Emma said: ‘When the doctors saw that we both had sepsis, they said they needed to think about me first, and even though my baby probably wouldn’t survive, they had to induce me and get the baby out so they could treat me.

‘I do think that if I hadn’t done my own research, Jude would have been born at 20 weeks without my stitch in and he wouldn’t have survived.

‘I knew something was going to happen. I know that sounds weird, maybe it’s something to do with my mum that made me more alert, but thank goodness I did otherwise my cervix wouldn’t have been checked.’

She wore a blindfold for the entire half an hour labour at Chelsea and Westminster Hospital, and refused to take it off until baby Jude was being rushed out of the room in an incubator. 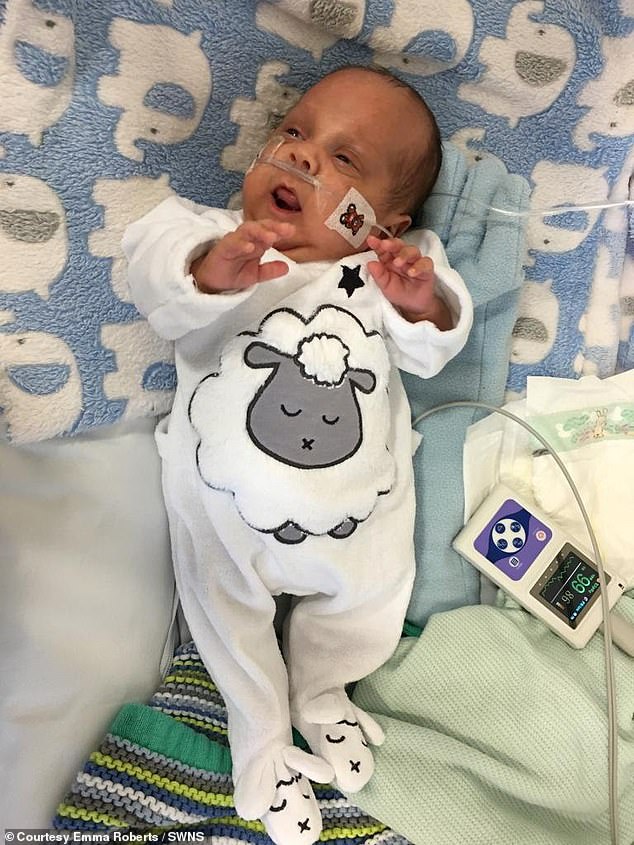 Jude spent the first four months of his life in hospital, and his mother admits she feared she might never be able to take him home 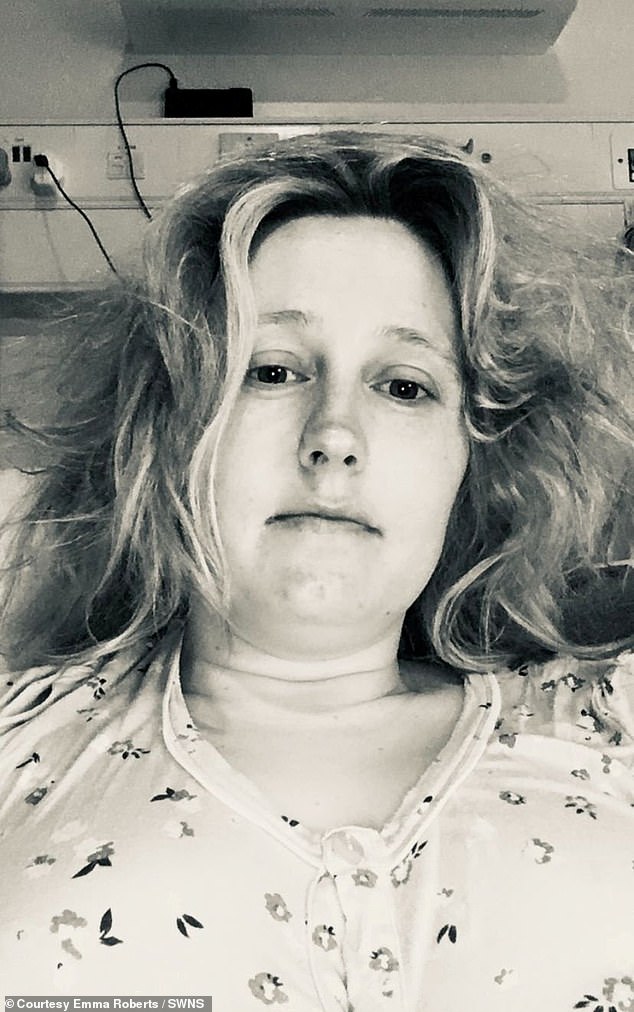 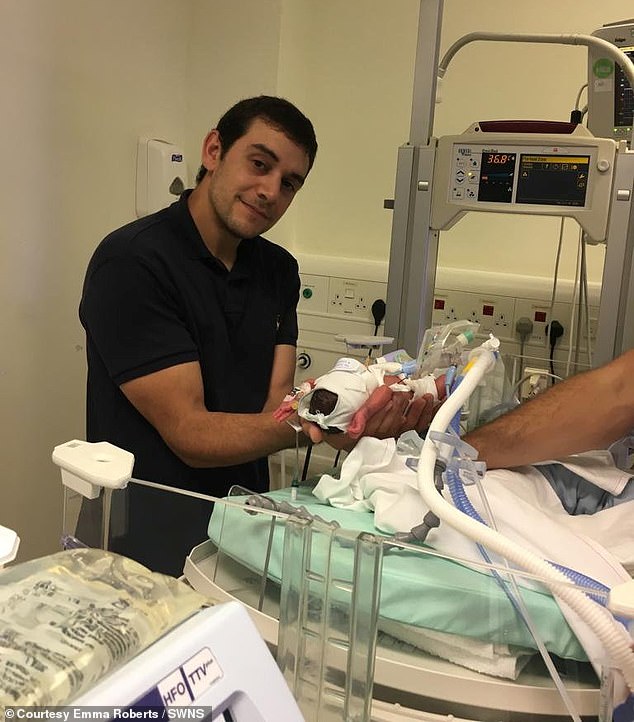 James Lami pictured with newborn Jude. Sarah recalls she refused to take off her blindfold until Jude was rushed out of the room to an incubator 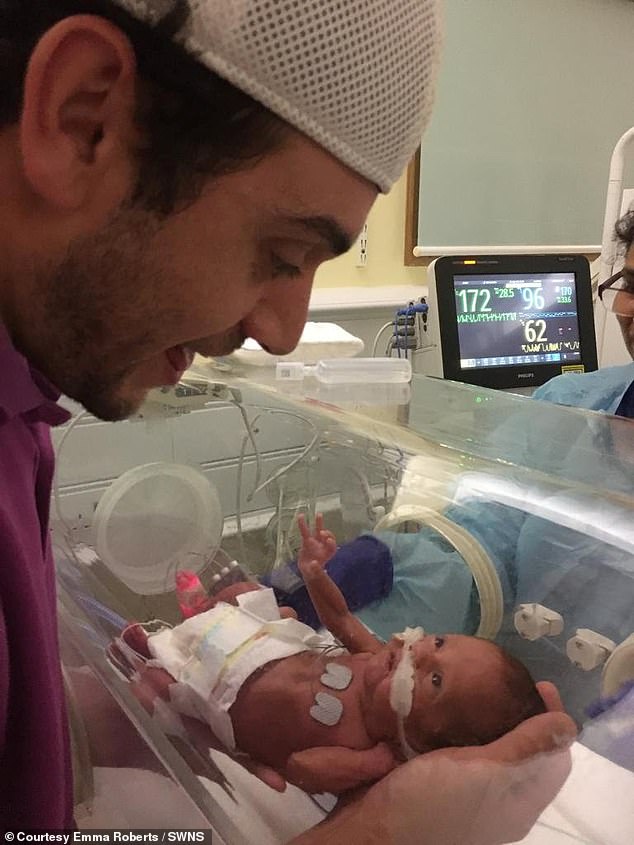 Proud dad James pictured with his son Jude, who had to spend the first four months of his life in hospital

Emma said: ‘They said he wouldn’t survive and I didn’t want to see him.

WHAT IS A CERVICAL STITCH?

A possible cause of giving birth early is because the cervix shortens and opens too soon. A cervical stitch may help to prevent this.

It’s placed around the cervix – the neck of the womb – usually between 12 and 24 weeks of pregnancy, although occasionally it may be done at later stages in pregnancy.

Babies born earlier than the 37 completed weeks of pregnancy have an increased risk of short and long term health problems.

Sometimes a cervical stitch is not advised because it may carry risks to you and it would not improve the outcome for the baby.

This may be if there are signs of infection, vaginal bleeding, the woman is having contractions or the waters are already broken.

There is no definite evidence to show that a cervical stitch will prevent an early labour if the mother is carrying more than one baby.

‘I gave birth, they took him to the other side of the room and they were working on him but all this time I kept the blindfold on because I didn’t want them to say that he’d died.

‘The hospital were absolutely incredible. There were about 15 people there – midwives, consultants, doctors, paediatricians, anaesthetists, all sorts.’

After Jude was taken to the NICU ward, Emma was rushed into theatre as her placenta had not been delivered.

When she woke up after surgery, she had no idea if her baby boy had survived and it was another hour before she got to meet her son properly for the first time.

She said: ‘I was in shock when I saw him for the first time. I was traumatised from the birth and I thought I was going to die because my mum died just after labour.

‘For the first two weeks, all I could do was stand by his incubator and cry.. I couldn’t touch him or hold him for four and a half weeks.

‘It was very hit or miss. He had pneumonia and brain bleeds, it was so traumatic.

Emma said: ‘I’ll never forget the feeling of leaving him in that hospital.

‘Even up to a week before he came home, I couldn’t buy anything because I thought if I bought things, then I would be telling myself he was coming home and I wasn’t guaranteed that.

‘It really did teach me how to be patient. I saw so many babies die in NICU and I just kept thinking Jude would be next. 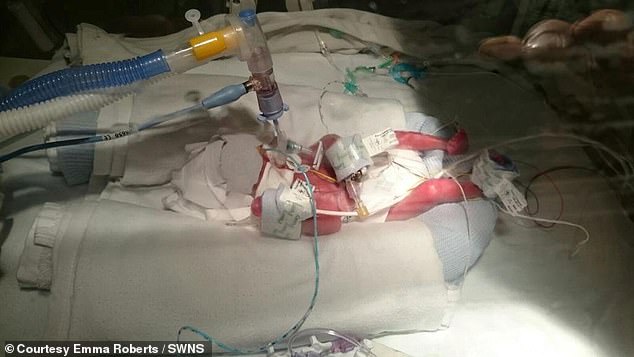 ‘Jude is my first and last baby ever because the experience was really traumatic.

‘I love being a mum. It’s very tough having a disabled child, but I wouldn’t change him for the world.

‘He’s only just learnt to walk and he can’t talk, but he is so happy.

‘If someone said we could turn back time and have a typically normal child, then there’s no way I would change him.’