Home » Lifestyle » I'm a pianist – who happens to be blind

I'm a pianist – who happens to be blind 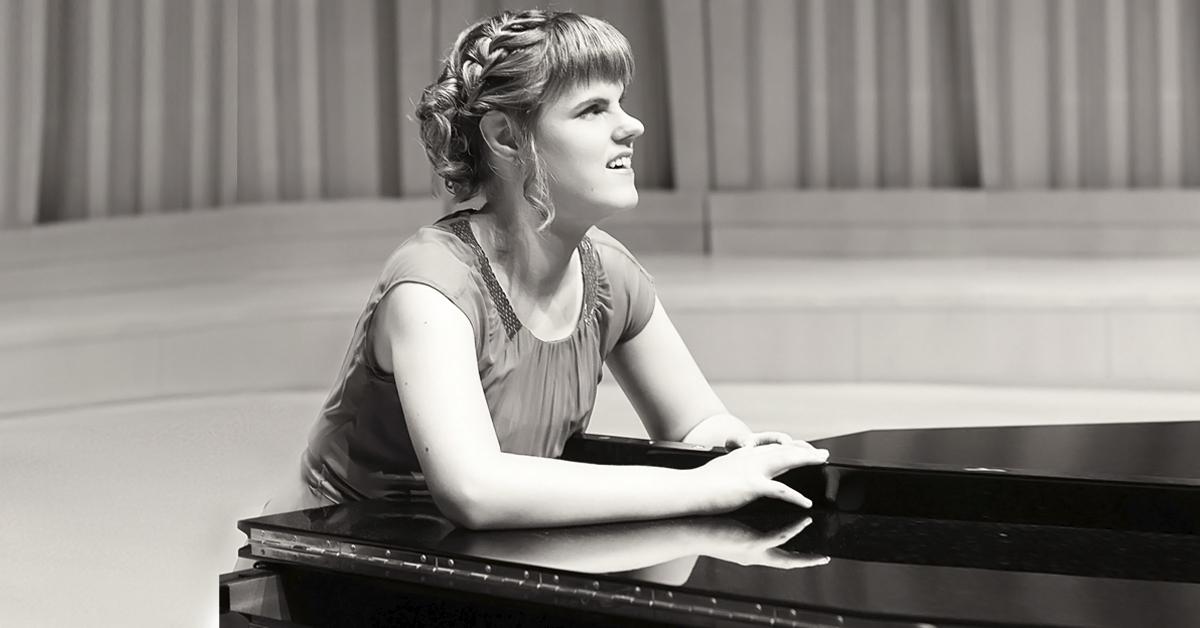 In a gymnasium. At the top of a rock climbing wall. Even in the middle of a race track with a car doing burn-outs around me.

Those are all the places I’ve played piano – and that’s just in one music video.

It was to promote the 2016 Paralympics and I was featured in the video alongside a bunch of other people with disabilities. We recorded the track – based on Sammy Davis Junior’s song, Yes I Can – in Abbey Road Studios and the whole process was intense, but electric.

As a blind pianist, I’ve played in places I never would’ve even dreamed of. These are the moments I cherish – when I can just do the thing I love. That’s when I feel my most at peace.

I’ve been blind since birth, with some light perception until two years old.

I could apparently see light and dark, but that eventually disappeared and now I am completely blind. I don’t even remember what the experience was like to have sight, as I am so used to living life as a blind person.

For that reason, I’ve learnt to rely on my other senses.

The first time I ever heard a piano being played was when I was six years old and sitting in a school assembly. I didn’t really know what it was but I just remember feeling so drawn to it.

I told my parents that I wanted to learn so I started informal lessons and practised on the keyboard we had at home.

In those early days, I played by ear and by the age of nine, I had completed grade five of piano. This simply means that I could play pieces, as well as had a thorough knowledge of scales, arpeggios, reading music (braille, not sight, in my case) and aural tests.

That’s when my teacher told me I had potential, so suggested I apply for the Royal Welsh College of Music and Drama (RWCMD). I was nervous, but I knew it would be the best place for me to get even better at something I loved to do.

I did a classical sonatina for my audition, then was examined on my technical and aural skills. Sure enough, I was accepted and I was so happy – especially because I was introduced to Alison Bowring, a piano teacher I’d learn so much from that I now call her my ‘piano mum’.

She’s still my teacher today. I’m just so grateful for everything she’s taught me over the years.

As a blind musician, I require a high level of support to travel to musical venues for performances and workshops. Venues are generally unfamiliar and there isn’t time to get used to new environments.

In terms of actually playing piano, I learn new pieces by listening to different recordings of the same song so I can hear the different interpretations. Then Alison goes over the details of the score – so the expressions, what the composer wants and why they were thinking in that certain way.

Then we’ll learn hand placements separately, depending on the complexity of the piece. At the end of the lesson, I’ll record everything I’ve learnt so I can listen back to the notes and keep practising it all.

I attended lessons at RWCMD every Saturday, where I learnt about braille music, as well as lessons in improvisation and musicianship. I did choir and played with other people too. I loved every second of playing piano and couldn’t wait to be there every weekend.

I attended the North London Piano School for five consecutive summers, then took a year out after finishing my A-levels to work on my independence skills – figuring out routes around RWCMD, where I’d start my undergraduate degree a year later.

It’s through university that I did a seven-month erasmus in Barcelona before completing a masters too.

During my studies, I received my Asperger’s diagnosis, which enabled me to get support from the National Autistic Society (NAS) to live independently in student accommodation after coming back from Spain.

Getting this diagnosis made so much sense. I’d always had such a diligent way of practising piano and trying to get things just right. More than anything, I think it actually helps hone my skills better because it makes me such a perfectionist.

My Asperger’s can provide additional complications though, as I find it difficult to organise myself sufficiently to make arrangements like hotel bookings, packing my suitcase, transport between hotels and venues. Currently I rely on my parents to provide this support, which is not ideal going forward.

In the years after graduating, I’ve done so much I’m proud of.

I’m part of a jazz trio that I started in university with a couple of classmates. We’ve played in jazz cafes before, where we improvise songs from the early 20th century like Bye Bye Blackbird or Softly As In A Morning Sunrise. We also performed at the Brecon Jazz festivals in 2020 and 2021.

This is when I often feel the most alive because it’s lively and the crowd gets into it too.

On the other end of the spectrum, I’ve played classical recitals in revered places like London’s St Martin-in-the-Fields church. You could hear a pin drop through an occasional cough, with hundreds of people sitting in the vast space with high ceilings.

At the end of this particular recital, I asked the audience for a suggestion on a piece of music for me to play. I heard someone shout out Cwm Rhondda – a popular Welsh hymn – so I started playing it, but putting my own unique spin on it.

I used some gospel and jazz elements to transform the improvisation from a hymn into a totally different mood.

Recently, I was part of the True Colors festival in Japan, which was a two-part live concert that showcased people with disabilities in an unforgettable concert. It was a fantastic experience.

Besides the thrill of getting my hair and makeup done by a team of professionals and wearing a lovely royal blue dress, I was wearing a headset so I was listening along and loving it. When it came to my performance, I did a big band piece with some of my friends from the 2016 Rio Paralympic advert – like Tony Dee, the Australian singer in a wheelchair and Alvin Law, a drummer with no arms.

I did a solo piece – Chopin’s revolutionary etude – then I played a duet with Adrian Anantawan, a violinist with one arm. Afterwards came the finale, when we were all on stage to project the important message of disability through Stand By Me, which was so much fun.

In the future, I want to continue playing classical recitals, but would also like to develop concerto repertoire with different orchestras. I really enjoy playing jazz too, where I can use my improvisation skills.

I’m very lucky that I have my piano mum, Alison, and my parents by my side – they’re the most supportive people I could ever ask for in my life.

As long as I’m behind a piano, I know I’ll have the confidence to go anywhere and do anything I want in the world.

To learn more about the True Colors Festival, visit their website here.