Stars of the stage and screen arrived at Ormond Hall in Melbourne this morning for the private funeral service of Australian music giant Michael Gudinski. 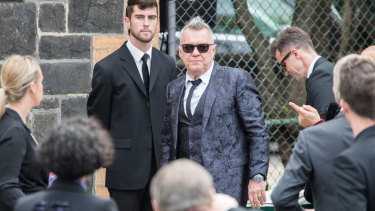 Jimmy Barnes, Missy Higgins, Molly Meldrum, actors Sam Neill and Asher Keddie, former St Kilda football captain Nick Riewoldt and cricket great Shane Warne were among the 360 mourners paying their respects to Gudinski, 68, who died at home in his sleep a week ago.

Kylie and Dannii Minogue, who both found musical fame under Gudinski’s leadership at the Mushroom Group, arrived together, with Kylie wearing a Mushroom T-shirt under her dark jacket. 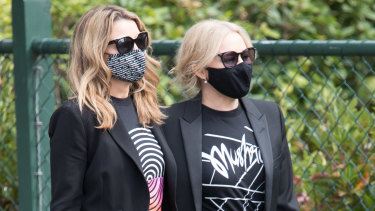 Sisters Kylie and Dannii Minogue arrived to pay their respects to the Mushroom Group founder, who was a close friend. Credit:Jason South

Guests arrived at Ormond Hall – where Gudinski first staged live music shows in the 1970s – to recorded music by bands he championed, including Skyhooks, Split Enz, Yothu Yindi and The Sports. Hunters and Collectors’ Mark Seymour was among the many musicians who arrived for the service, which began soon after 11am. More recent emerging stars, including The Rubens and members of the Teskey Brothers also joined Gudinski’s family inside. 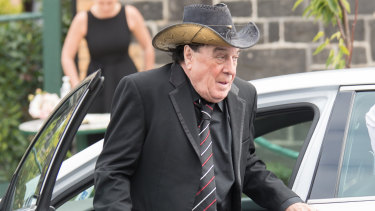 Molly Meldrum, a friend of Gudinski’s for over 50 years, arriving at the funeral on Wednesday. Credit:Jason South

As the service got underway, 162 roadies set up a guard of honour in Moubray Street for a funeral procession, all of them wearing black T-shirts emblazoned with the words MG Crew Forever.

A state memorial service for Gudinski will be held at Rod Laver Arena on March 24.