The Kate effect is back! Duchess of Cambridge’s £255 snakeskin clutch by Meghan Markle’s favourite bag brand Strathberry sells out within HOURS after royal carried it on tour

A £255 clutch by Meghan Markle’s favourite bag brand has sold out within hours of Kate Middleton stepping out with the piece.

The Duchess of Cambridge, 38, carried the Multrees Wallet by Scottish designers Strathberry, during the first stop of the royal couple’s Christmas Express tour in Edinburgh yesterday.

The black snakeskin bag, which is described online as ‘understated and elegant’, sold out within hours with a spokesperson for the upmarket brand saying they saw a surge of customers to their site.

The label, which was founded by designers Guy and Leeanne Hundleby, was a favourite of Meghan Markle’s, 39, during her time in the royal family. 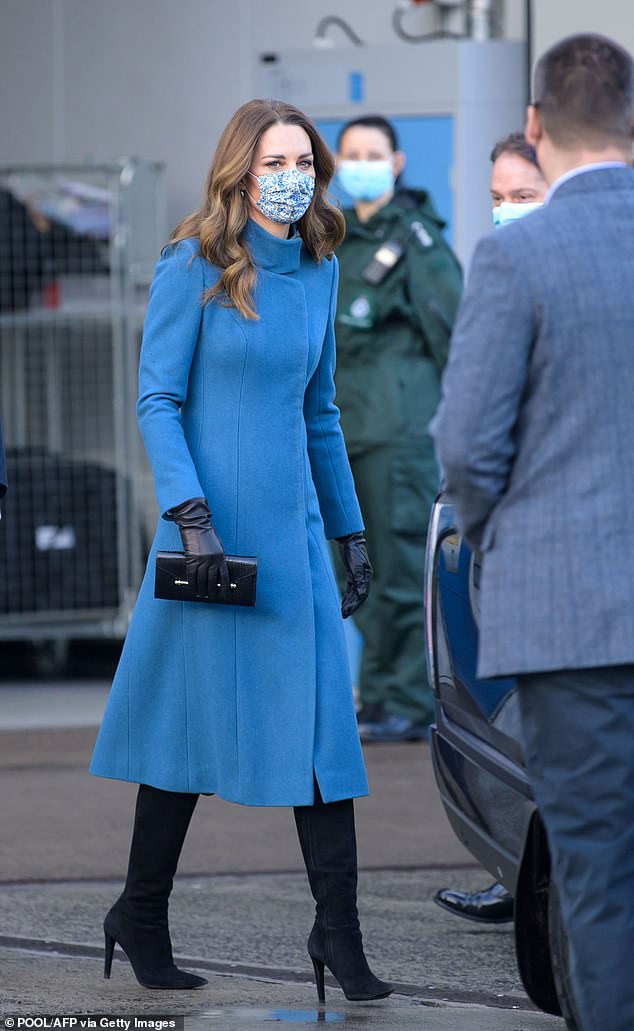 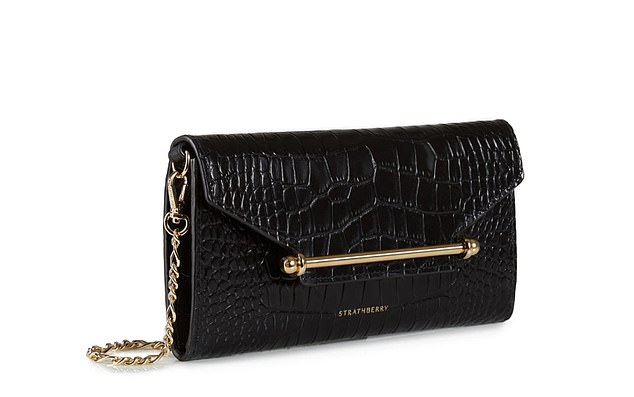 Speaking to Edinburgh Live, Leeanne Hundleby, said it was ‘so thrilling’ to see the Duchess carrying the piece yesterday.

She said: ‘We’re completely overjoyed and honoured that she chose to support a small, independent Scottish brand during her visit to Scotland.

‘Her endorsement means the world to us, and she looks incredibly beautiful and sophisticated, as always.’

It was the first time the Duchess has stepped out carrying a bag from the brand, which was a favourite of sister-in-law’s Meghan. 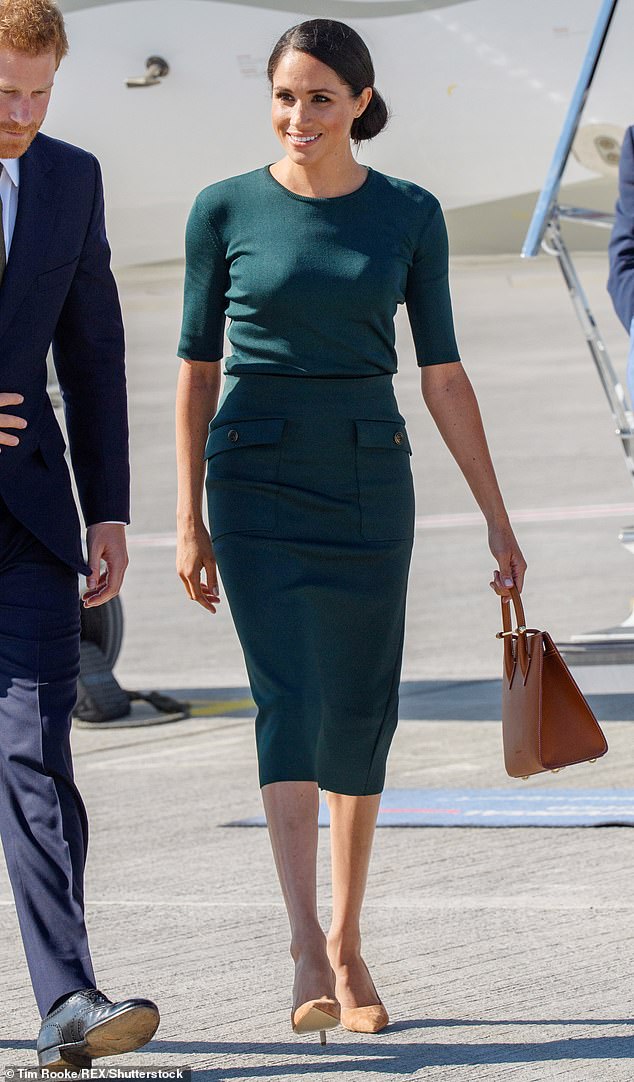 While it was the first time the Duchess of Cambridge stepped out carrying a bag from the brand, it was a favourite of sister-in-law’s Meghan Markle, 39,

Leeanne and her co-founder Guy previously revealed  they were able to open their first London store thanks to the ‘phenomenal’ impact of the Meghan effect.

The Duchess of Sussex first carried one of the brand’s bags during her first ever engagement with Prince Harry in Nottingham in 2018.

The £495 Tricolour Midi-Tote sold out within 24 hours of her stepping out with it, with the couple explaining how Meghan’s endorsement has ‘driven’ their business ever since.

Speaking about the impact of the Duchess stepping out with their tote bag for the first time, Guy told The Telegraph: ‘We suddenly had interview requests from around the world. 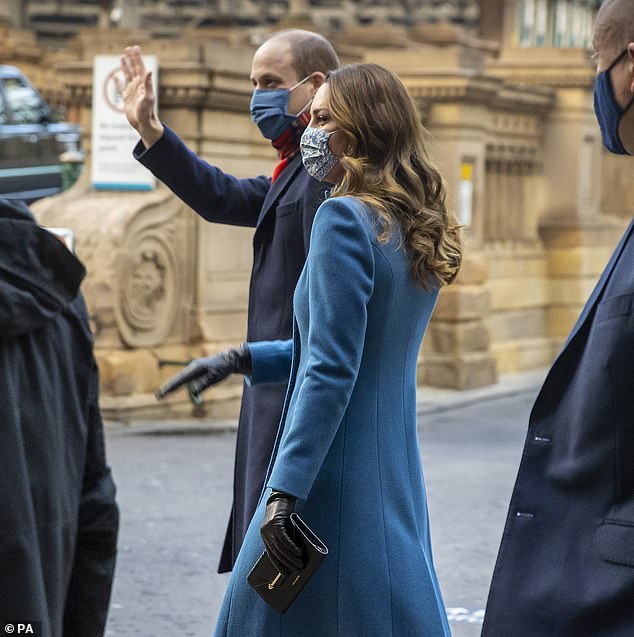 ‘We’re a pretty private family so the interest in us was scary. But for the brand it was phenomenal and it has driven our business.’

Leeanne revealed that she had been a fan of Meghan even before her relationship with Harry began, and had long-hoped to get her endorsement.

‘I had watched Suits obsessively, and always thought she was stylish,’ admits Leeanne. ‘I wrote to her agent and stylist routinely, then we sent a few pieces.’

Meghan showed off the £495 burgundy Midi-Tote by Strathberry in Nottingham in December 2018, shortly after she and Harry announced their engagement. 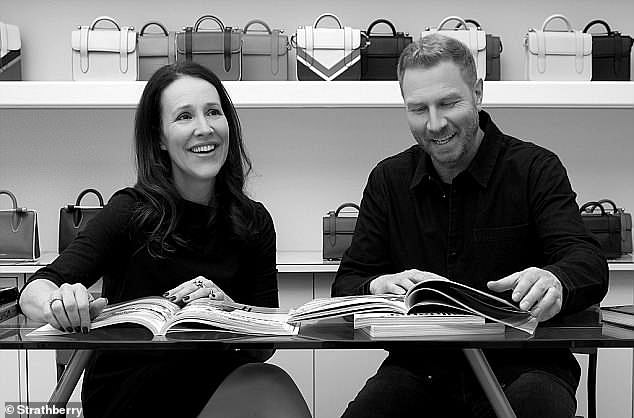 Guy and Leeanne Hundleby (above), who are based in Edinburgh, explained how Meghan sporting their bags has ‘driven’ their business

The bag completely sold out within 24 hours, with the midi-tote now the Strathberry’s best-seller.

Just two months later, Meghan had Strathberry’s East-West Mini-Tote slung over her shoulder for her engagement in Edinburgh.

The Duchess also carried Stratberry’s Midi-Tote in tan as she and Harry arrived in Dublin, sparking headlines when she left the plastic on the bottom of the bag.

The Strathberry designers previously described the ‘phenomenal’ impact the Duchess’s endorsement has had on their brand. Meghan is pictured here in Edinburgh  with Strathberry’s East-West Mini-Tote (left)  and showing off the £495 burgundy Midi-Tote by Strathberry in Nottingham in December 2018 (right)