LITTLEJOHN:Only a matter of time before burglars target fridges

RICHARD LITTLEJOHN: Careful, or they’ll even nick the chip off your shoulder… It can only be a matter of time before burglars target washing machines and fridges

The scale of the global microchip shortage was brought home to me when I flew to Detroit in March.

My journey from the international airport to the hospital caring for my mum took me past the Ford Motor Company headquarters in Dearborn.

At the time Michigan was still in the grip of Covid restrictions and 30,000 Ford office staff were working from home.

The HQ buildings were eerily quiet, nobody coming or going. But, strangely, the car parks visible from the freeway were jam-packed.

Row after regimented row of gleaming SUVs and sedans were lined up as far as the eye could see.

My nephew, who works for a car dealership in suburban Detroit, explained that they were all brand new but couldn’t be sold because they were lacking vital electrical components.

Most of them wouldn’t even start and had to be transported to the HQ parking lots on trucks when available space at factories ran out.

Microchips, which control a multitude of on-board systems from anti-lock braking to sat-nav, had been in short supply since the start of the pandemic. 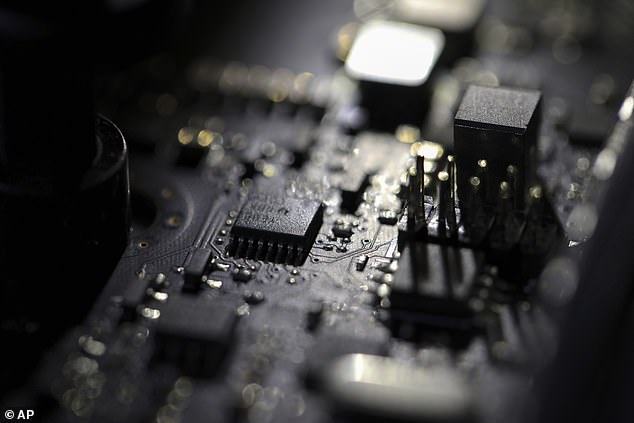 A stockcomputer chip pictured as a shortage has made it harder for consumers to get their hands on cars, computers and other modern-day necessities 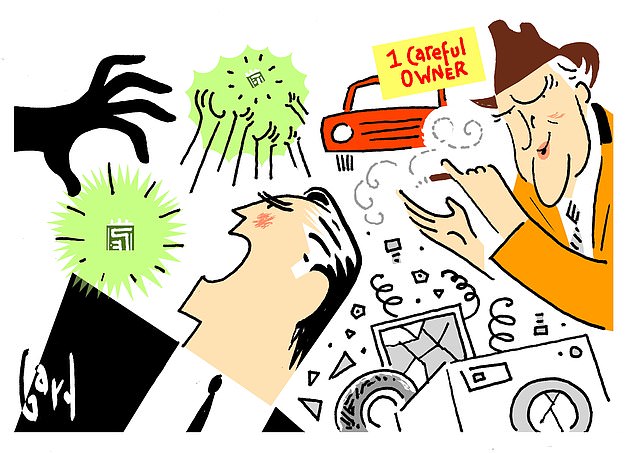 Jacob Rees-Mogg is already facing an uphill task to get civil servants back to their desks without Conservative colleagues playing silly beggars.

The Moggster isn’t sending children with rickets up chimneys.

He’s merely asking feather-bedded public employees to do the job they are paid for, at the place where they are contracted to do it.

Resistance from the unions is only to be expected — but not from fellow Conservatives.

White-collar civil servants have never had it so good, sitting at home munching Hobnobs for the past two years while still getting their full London weighting allowance.

Whoever said that lockdown consisted of middle-class people hiding while working-class people brought them things was bang on.

I was reminded of this last week when we had a drainage emergency, to put it as tastefully as possible.

After couldn’t-care-less Thames Water took a cursory glance and washed their hands of responsibility, I called our domestic insurers HomeServe, who sent engineer Steve Atkinson.

He spent hours up to his neck in it, tracing the root cause and eventually clearing the blockage, which was under a neighbouring property.

Despite modern technology, poking around in blocked drains is about as ‘Dickensian’ as it gets.

While entitled civil servants have been lounging around at home, dedicated manual workers including delivery drivers, telecoms technicians, supermarket staff, dustmen, drainage engineers, etc, were on the front line every day.

What if they’d decided to cower at home with their feet up for the duration?

Without people like Steve, not just me last week but all of us would have been up the proverbial creek without a paddle.

Workshy civil servants should remember that and get back to their desks sharpish, or be given their P45s.

If they don’t like their cushy life in the Whitehall swamp, they could always get a new job clearing drains.

Now they had dried up altogether. General Motors and Chrysler were experiencing similar problems. That rang a bell.

On the plane over I’d read a report about Jaguar and other UK motor manufacturers being crippled by a semiconductor drought. That would explain why, when I went to trade in my 11-year old Mini Cooper last month, I couldn’t get a new car for love nor money.

For instance, the waiting list for a new Mini is now between six and nine months. Some other models are taking up to year.

Consequently, used car prices have gone through the sunroof. Arthur Daley is having a field day, especially as there’s no global shortage of Bri-Nylon shirts to stuff into a dodgy gearbox.

It’s not just cars, either. Everything from kitchen appliances and smart TVs to mobile phones and laptops are affected. We’re talking the full Arnold Wesker here.

In our interconnected world, it’s chips with everything. But it is the motor industry which is resorting to the most drastic solution.

Manufacturers are lumbered with unsold luxury vehicles retailing at £100,000 for want of a simple chip which cost just £1 a pop pre-Covid.

So in desperation they are buying up washing machines and cannibalising them for parts.

These chips can be adapted to work in cars, too. Stuart Miles, of the tech website Pocket-Lint, told the Mail on Sunday that car-makers have probably had a ‘Eureka’ moment.

‘We are going to buy washing machines and we can take the sensors out of them. What are we going to do with the leftovers? Let’s worry about that tomorrow.’

We can only hope they don’t have to resort to fly-tipping them after being turned away by council dumps still wedded to obstructive Covid jobsworthery.

Our country lanes are already littered with everything from abandoned TVs to builders’ rubble, without mountains of eviscerated washing machines adding to the debris. And where the car industry leads, the criminal fraternity won’t be far behind.

There’s gold in them thar Indesits. In the Mail yesterday, Tom Rawstorne reported on the alarming epidemic of thefts from motor vehicles.

Thieves aren’t bothering to steal the cars any more, they’re hijacking airbags and catalytic converters, which contain valuable metals they can sell on the black market.

Years ago, burglars would break in to houses to steal video recorders and jewellery. It can only be a matter of time before they target washing machines, fridges and other appliances containing scarce semiconductors.

We gotta half-inch microwave ovens … Soon no kitchen or laundry room in the land will be safe.

You’ll come downstairs in the morning to find your tumble dryer disemboweled and your expensive all-singing, all-dancing, computer-controlled coffee machine castrated. If you’re not careful, they’ll even nick the chip off your shoulder. 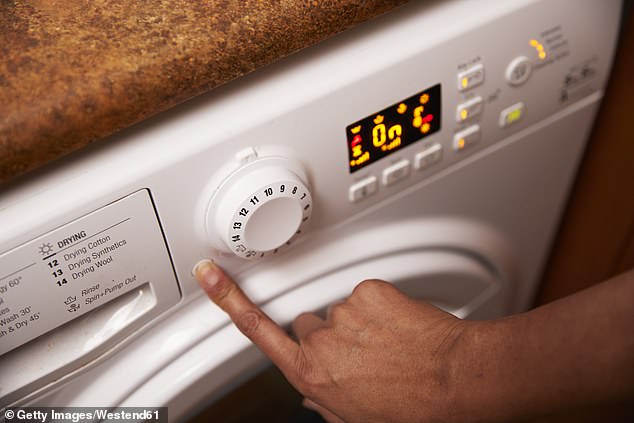 Where will it all end? Will washing machine manufacturers retaliate by buying up new cars and stripping them of semiconductors? Who could have imagined two years ago that as a result of Covid, your washing machine would become criminal currency because car companies are desperate for computer chips?

Best invest in a second-hand twin tub and a mangle while stocks last. When Detroit was the engine room of the U.S. economy, they used to say that what was good for General Motors was good for America.

And when America sneezed, the world caught a cold. Today, when someone sneezes anywhere, the whole world is turned upside down.

Mask Watch update. With the windhowling up the Thames Estuary, Mail reader Chris Gundy spotted a woman wearing a mask at the end of Southend pier, the world’s longest at 1.33 miles.

She was in far more danger of being blown out to sea than catching Covid.

Despite enjoying a substantial lead in the polls, Labour is trying to talk down expectations before the local elections.

One Labour insider moaned it would be difficult to win Tory boroughs such as Wandsworth and Westminster, where council tax was ‘artificially low to keep the voters onside’.

Eh? Surely keeping taxes low is one of the main reasons people vote Conservative, something Dishi Rishi would do well to remember. Unlike Labour, which still believes in keeping taxes artificially high. 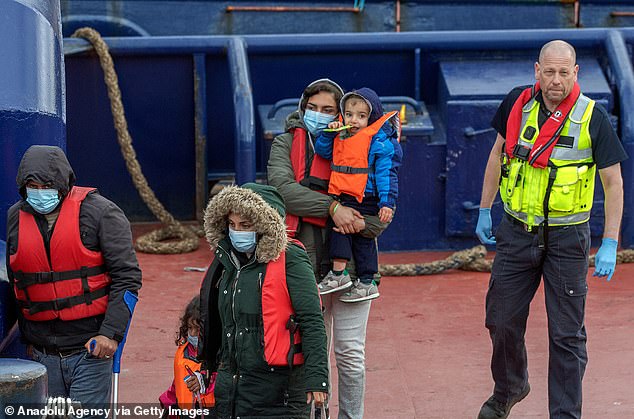 Most of the disingenuous bile poured on Priti Flamingo’s Rwandan migrant deal has come from die-hard Remainers.

But consider this. The immigration crisis was foisted upon us by our so-called European ‘partners’ when we were still in the EU.

Once they had landed in Europe — mostly young, single male economic migrants — open borders meant they were free to head for Britain. Italy and France in particular reneged on their international treaty obligations, which state asylum applications must be made in the first safe country.

Italy handed out free rail warrants to help them on their way and France continued to wave them off across the Channel, despite us giving Macron’s government millions to stem the human traffic.

The French navy even escorts them into British territorial waters. So spare us the Remainer hand wringing.

Without the cynical complicity of our former EU partners, we wouldn’t have to send anyone to Rwanda.