There was a full moon last night as Elton John serenaded a packed stadium of fans – but it wasn’t in the sky. 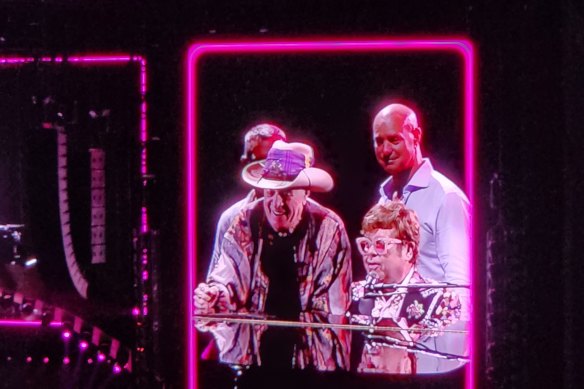 In the first Melbourne show of the music superstar’s farewell tour, John was unexpectedly joined on stage at AAMI Park by long-time friend and Australian icon Molly Meldrum.

After a hug and a quick kiss, John returned to the piano to perform The Bitch Is Back with Meldrum by his side, dancing and singing.

But soon, dancing turned into something different as Meldrum dropped his pants to knee level, giving the crowd a full view of his bare behind – a scene which was projected on the giant screens on either side of the stage, presumably to make sure no-one missed out.

John took the mooning in stride, and carried on the performance as though it were business as usual, exchanging a few words – and another kiss – with a laughing Meldrum before the screens cut to black and the pre-recorded graphics were beamed back up on stage again.

Earlier in the evening, Meldrum was singled out by John as he thanked his friends who were in attendance.

Elton John will perform again in Melbourne tonight. No word yet on whether Meldrum will be joining him.