Australia's greenhouse gas emissions likely rose in the September quarter as increased pollution from industry and other sources cancelled out record levels of penetration by renewable energy in the electricity sector.

Analysis by consultancy Ndevr Environmental found emissions in the July-September period were equivalent to 124.2 million tonnes of carbon dioxide, or a 1.5 Mt CO2-e increase on the June quarter. 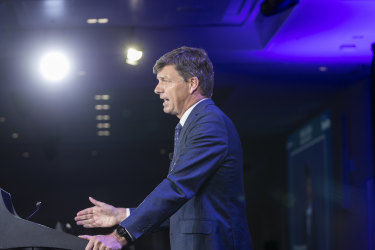 Energy and Emissions Reduction minister Angus Taylor has insisted that Australia is on course to meet its 2030 Paris targets. Credit:Louie Douvis

The assessment shows Australia's economy – and carbon emissions – bounced back in the first three months of the fiscal year. The most recent official government data revealed June quarter emissions sank 6.2 per cent, or 8 Mt CO2-e, from the March quarter amid the coronavirus disruptions.

Even with the recent pick up in pollution, the September quarter projections indicate emissions are likely running at about 7 per cent, or 9.1 Mt CO2-e, lower than the same period last year.

Matt Drum, Ndevr's managing director, said the impact of COVID-19 on depressing emissions meant Australia would meet its Paris climate target by about 2023 or seven years early, should the trend over the past 12 months be maintained.

More likely, though, pollution levels would continue to rebound. If they returned to the historical trend since 2015, Australia would not hit the Paris goal until 2039-2042 without policy interventions, Ndevr data show.

"I predict we’ll be back to pre-COVID levels within six month across all sources except air travel – due to reduced international aviation which will be a longer term proposition," Mr Drum said.

"Bearing in mind that reductions will need to happen over time, not just at 2030, excluding the Kyoto [Protocol carryover] units, our figures show we’re likely to emit almost 300 MtCO2-e above our [Paris] budget," he said.

The office of federal Energy Minister Angus Taylor was contacted for comment. Mr Taylor has repeatedly said Australia would meet and beat the Paris targets, and government projections released last month provided scenarios where that result would be achieved.

Key to Australia's downward trajectory of emissions has been the electricity sector where the rise of renewable energy from wind and solar farms and rooftop solar panels has been squeezing out coal and gas.

Ndevr said power sector emissions in the September quarter were the second-lowest on record in data going back to 2002, dropping 2.16 Mt CO2-e compared with the June quarter.

Among the big three NEM states, NSW sourced 18.3 per cent of its power from renewables, and just 1.1 per cent from gas. For Victoria, the share was 26 per cent and Queensland 15.8 per cent.

For other sectors, though, the signs are mixed. While road transport emissions dropped at the start of the coronavirus outbreaks, any longer term reductions are likely to be "marginal at best", given the make-up of the transport fleet, Mr Drum said.

Increased emissions from industry, waste and other sources such as the growing gas export industry had all nullified reductions in electricity and agriculture since 2015, Ndevr said.

Still, "we are seeing more and more pressure from the investment community and industrial customers for emissions-intensive businesses to push down emissions", Mr Drum said.

"In my 13-plus years working in this space, I have never seen business so motivated to act," he said. "Government policy is becoming redundant."