The mid-winter push for Victoria’s office staff to work from home and don masks indoors to slow the latest spread of COVID-19 has not affected worker numbers in Melbourne’s CBD.

Data from the Department of Transport and City of Melbourne shows there was no noticeable change to commuter numbers after July 12, when Health Minister Mary-Anne Thomas asked employers to encourage their staff to work from home and recommended greater mask usage. 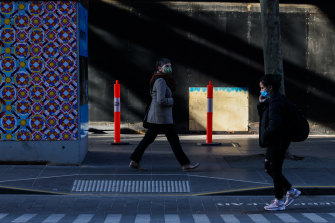 On Thursday, public transport patronage was 65 per cent of the pre-pandemic level in July 2019, up from 64 per cent a week prior. Two weeks earlier, on July 5, patronage was 68 per cent of the normal traffic. That was before the minister decided not to mandate masks and work-from-home arrangements, instead strongly recommending them.

Traffic on Punt Road and Hoddle Street was busier than pre-pandemic levels, at 101 per cent on Thursday. Traffic was at 98 per cent a week prior and 97 per cent two weeks prior.

“Traffic volumes and patronage on public transport has remained consistent, with no significant changes to network utilisation,” a Department of Transport spokesman said.

Foot traffic near Town Hall was also stable after health advice was strengthened, according to City of Melbourne data.

The number of pedestrians dipped last week from 86.4 per cent to 76.6 per cent but recovered this week to an average of 86.6 per cent between Monday and Wednesday.

Public sector workers are still expected to go to the office three days a week, but extra flexibility has been provided during the BA.4 and BA.5 subvariant wave.

Wayne Townsend, acting branch secretary of the Community and Public Sector Union, said employers were “far less insistent” on workers returning to the office in light of the latest health advice.

“There are now more workers discussing with their employers working from home to a greater extent,” Townsend said.

“A few weeks ago, employers were also encouraging people to return to the office. The insistence people come back to the office is not occurring to the extent it might have been.”

Victorian Chamber of Commerce and Industry chief executive Paul Guerra said people were now commuting to the office for one or two days a week instead of three or four.

“Nobody wants to see the health system under pressure,” Guerra said. “People are coming to different arrangements with their employers.”

The City of Melbourne held firm in its flexible working arrangements since the arrival of the new Omicron variants, with about 90 per cent of council staff going into the office.

Last Tuesday, Thomas asked employers to consider working-from-home arrangements that suited them and their staff. The advice, which is a recommendation rather than a directive, left a grey area for employers and staff to navigate.

The Australian Health Practitioners Regulatory Agency (AHPRA) informed staff last week that they would still be required to commute to the office at least twice a week, but reversed that advice on Friday after queries and complaints from staff.

“… [F]ollowing staff feedback and media coverage in the past few days, we recognise people may be feeling unsafe commuting to the office. So, if you are able to effectively work from home, you can choose to do so,” chief executive Martin Fletcher told staff in an email seen by The Age.

A WorkSafe spokesman said employers needed to consult workers about their circumstances when assessing COVID-19 risks.

“This includes consulting with workers about their individual circumstances and the suitability of work from home and other flexible arrangements,” the spokesman said.

Speaking to the media in Ballarat on Friday, Premier Daniel Andrews said employers and employees needed to find a balance.

“I know that there are challenges with working from home … but some changes, I think they’re here to stay,” Andrews said.