Publicans’ cup of good cheer as Albanese rides into town

If the guest list at the Australian Hotels Association annual pre-Melbourne Cup luncheon on Monday was anything to go by, there will be plenty of political and business star power at Flemington for Tuesday’s big race.

The hoteliers and pokies operators had Prime Minister Anthony Albanese sat at the top table where Sydney pub mogul Arthur Laundy — father of former federal Liberal MP Craig Laundy — as well the association’s South Australian supremo David Basheer had the chance to get into Albo’s ear. 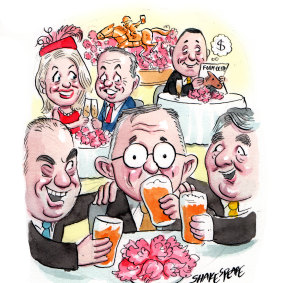 The prime minister received an enthusiastic gee-up from AHA chief executive Stephen Ferguson before Albanese launched into his speech, but there was no sign of his good mate, Victorian Premier Dan Andrews, once so close to the pubs lobby and who has often appeared at the luncheon in the past but has an election to win in just four weeks.

Across the “new and improved” marquee that housed the luncheon in the Botanic Gardens this year, there would have been much to talk about on table 18 where Clive Palmer’s $100 million senator Ralph Babet was joined by Liberal senator Jane Hume and newbie MP Keith Wolahan.

Plenty of Nationals were in town for this affair, with former party leader Michael McCormack settling down at table 4 with former trade minister Dan Tehan and NSW minister-turned-lobbyist Michael Photios while retired AFL footy coach-then MP Damien Drum was across the room at table 15 with his successor in the seat of Nicholls Sam Birrell.

Table 21 was one for the backroom operators. Scott Morrison’s old principal private secretary Yaron Finkelstein, who now has an advisory firm and moonlights as “special counsel” to NSW Premier Dominic Perrottet, would have a bit to chew over with former Kelly O’Dwyer staffer Julian Sheezel, who is now general manager of corporate affairs with Asahi beverages, and Lincoln Folo, state director of Queensland’s LNP, while former Liberal education Minister Alan Tudge and Victorian senator David Van listened in.

That’s quite the field.

Dan Andrews managed to trigger much of Australia’s business establishment and their media side-kicks with his announcement last month that he intended to partially nationalise Victoria’s power generation.

But material has come to CBD’s notice that proves Dan wasn’t the first one to hit on the idea.

Liberal candidate for Morwell, Dale Harriman was on Facebook on September 30, declaring that he would do his darndest to take the state back into the energy business if he managed to jag the seat when Victoria votes on November 26.

“When I am elected the member for Morwell, I…will be calling for the government of the day to save [coal-fired power station] Loy Yang A and re-establish the State Electricity Commission of Victoria (SEC),” Dale told his followers.

That was nearly three weeks before Andrews made his policy announcement.

ABC’s Q&A hasn’t been relevant for a while. With ratings falling since it moved to Thursday night, a rotating cast of hosts, senior pollies no longer interested in appearing, and no more shoe-throwing, maybe the only thing preventing ABC leaders from putting it out of its misery is their notorious risk aversion.

While the show struggles to find a way forward (A return to Mondays? More Stan Grant monologues?), its creator Peter McEvoy, who finished up in 2019, has a new gig spinning for teal independent MP Allegra Spender.

As a journo, she’s best known for landing in a 2018 defamation battle, settled out of court, with Emma Husar, over articles the former Labor MP allegedly “slut-shamed” her.

So Emma shouldn’t hold her breath for an invite back onto the ailing show.

Former Australian Charities and Not-for-Profits commissioner Gary Johns didn’t last long after the changing of the guard in Canberra.

Johns’ appointment to the $332,550 a year role by the Turnbull government in 2017 sparked anger from the then opposition, and many within the sector, unhappy with Johns’ criticism of some of the charities he was regulating.

But Johns has been busy in retirement, pumping out a book, The Burden of Culture, which takes aim at “the Aboriginal industry”. The 500-page tome is published by Quadrant, the conservative literary magazine that now publishes screeds the News Corp tabloids won’t.

Johns criticises elements of Aboriginal culture for preventing “integration,” calls for an end to Acknowledgements of Country, argues the “inter-marriage” between Indigenous and non-Indigenous people should be celebrated, all while using the term “Aborigine,” disliked by many First Nations people.

It’s a bit of work for Johns to have done in the months since his term expired in July, but the ACNC didn’t confirm whether he’d been writing while still on the public purse.