The Queen and the Commonwealth: Royal Family Instagram account shares a selection of snaps celebrating Her Majesty’s ‘life’s work supporting this extraordinary organisation’

In a post this morning, a selection of photographs marking Her Majesty’s visits to the nations and meetings with people from across the 56 member states were shared.

Highlights included the monarch pictured at The Queen’s Young Leaders Awards reception in Buckingham Palace in June 2015, of which footballer David Beckham was a guest.

Another image shows Her Majesty and Nelson Mandela chatting with Ntsako Mlambo, then aged 14, who was the winner of a British Council essay competition for South African schoolchildren during the Queen’s state visit to Africa in 1999.

The post also included a quote from the Queen from her 2015 Commonwealth Day message, when she said: ‘One simple lesson from history is that when people come together to talk, to exchange ideas and to develop common goals, wonderful things can happen.’ 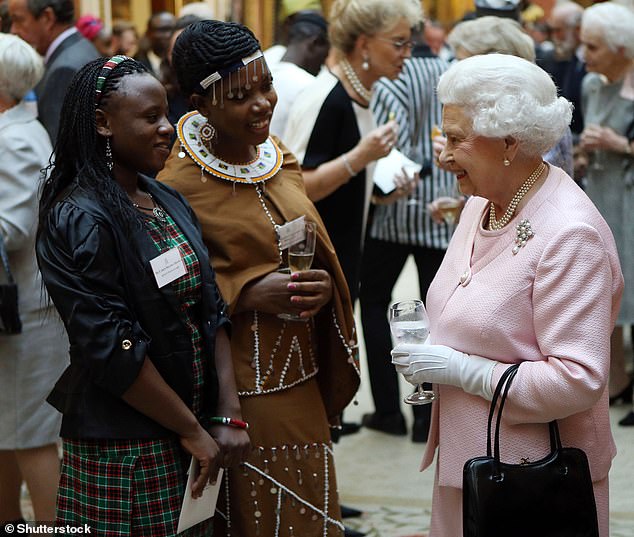 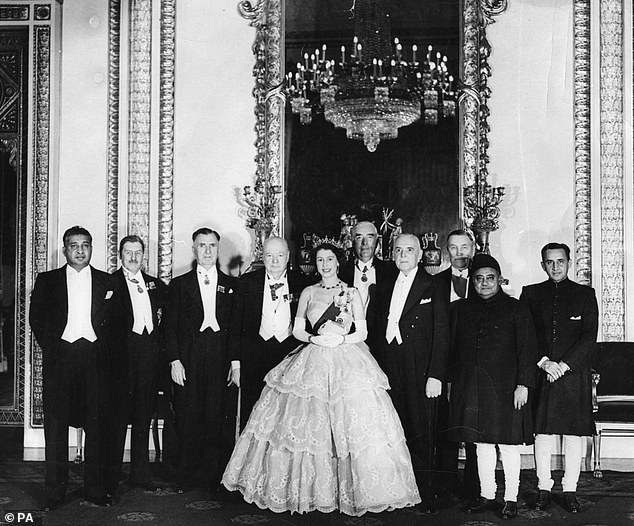 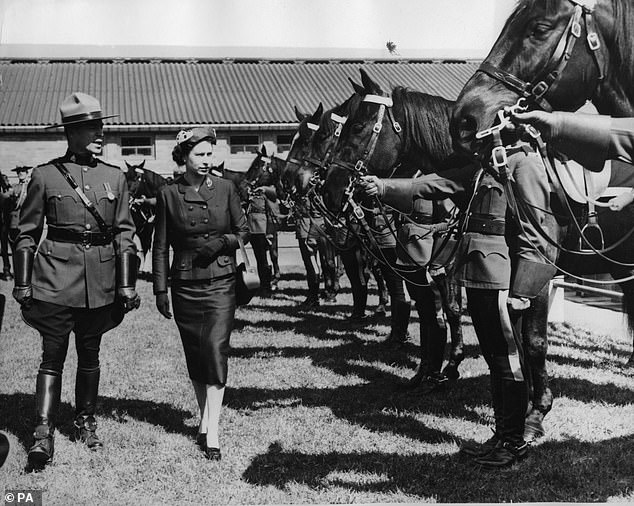 The Queen inspects a detachment of the Royal Canadian Mounted Police at Combermere Barracks, Windsor 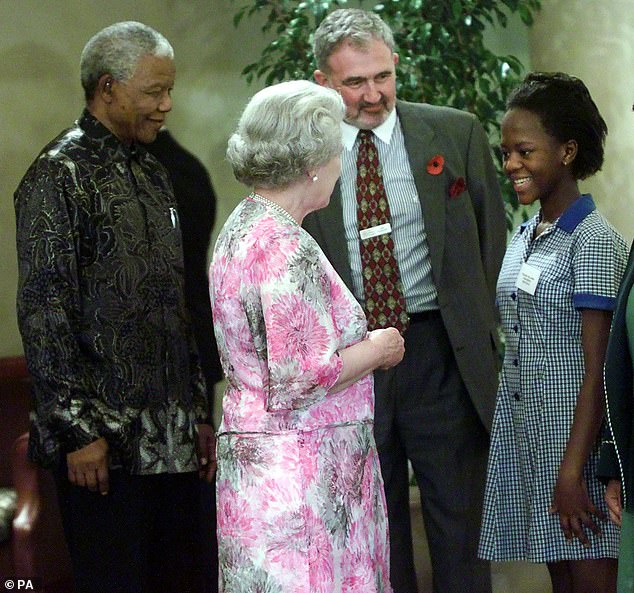 Another image shows Her Majesty and Nelson Mandela chatting with Ntsako Mlambo, then aged 14, who was the winner of a British Council essay competition for South African schoolchildren during the Queen’s state visit to Africa in 1999

The caption read: ‘Over the course of The Queen’s reign, The Commonwealth developed from just seven nations to 56 member states, representing more than a third of the world’s population working together on issues including climate change, education for girls and global healthcare.

‘Before she became Queen, in her 21st birthday broadcast, made from Cape Town, Her Majesty pledged nothing less than her life’s work to supporting this extraordinary organisation:

‘”I declare before you all that my whole life whether it be long or short shall be devoted to your service and the service of our great imperial family to which we all belong.”

‘She remained true to her word, setting off on a six-month tour of the Commonwealth following her Coronation in 1953. 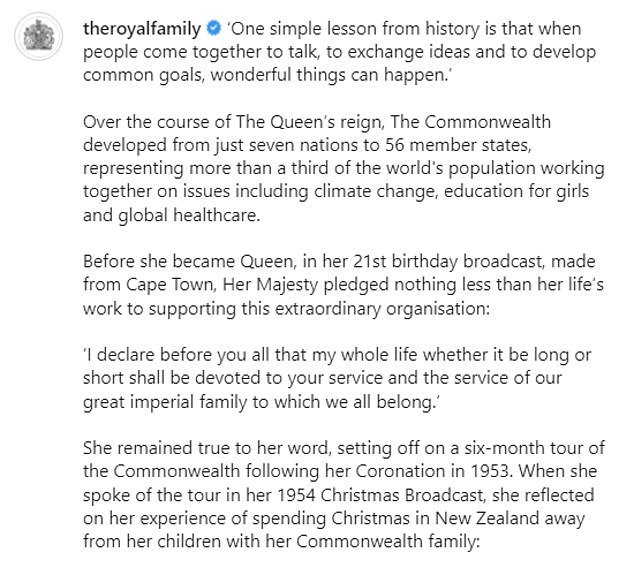 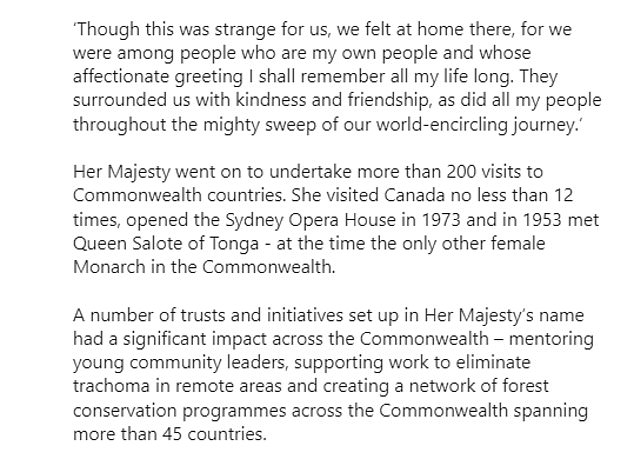 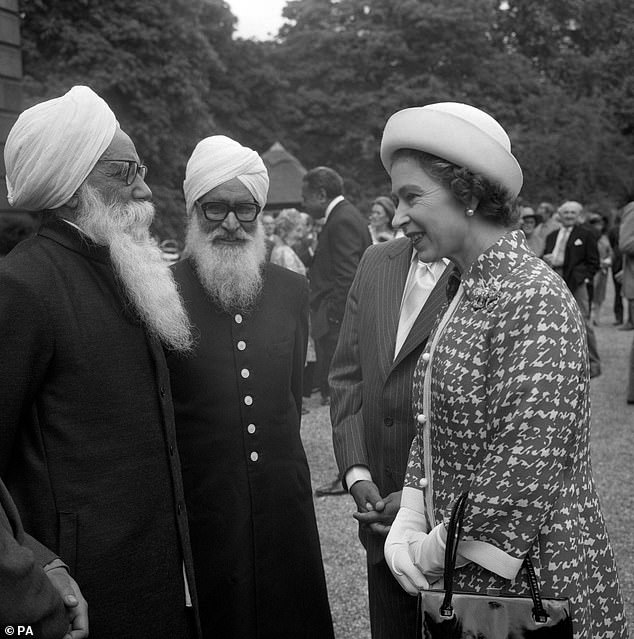 The Queen talks with Puran Singh, left, and Mahna Singh, both from India, in the grounds of Marlborough House in London when she and the Duke of Edinburgh attended a reception given by the Commonwealth Secretary-General Shridath S. Ramphal, after the Commonwealth Day Service 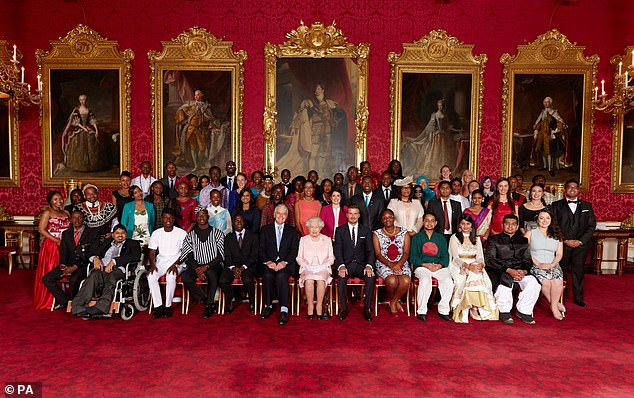 ‘When she spoke of the tour in her 1954 Christmas Broadcast, she reflected on her experience of spending Christmas in New Zealand away from her children with her Commonwealth family:

‘”Though this was strange for us, we felt at home there, for we were among people who are my own people and whose affectionate greeting I shall remember all my life long. They surrounded us with kindness and friendship, as did all my people throughout the mighty sweep of our world-encircling journey.”‘

The caption continued: ‘Her Majesty went on to undertake more than 200 visits to Commonwealth countries. She visited Canada no less than 12 times, opened the Sydney Opera House in 1973 and in 1953 met Queen Salote of Tonga – at the time the only other female Monarch in the Commonwealth. 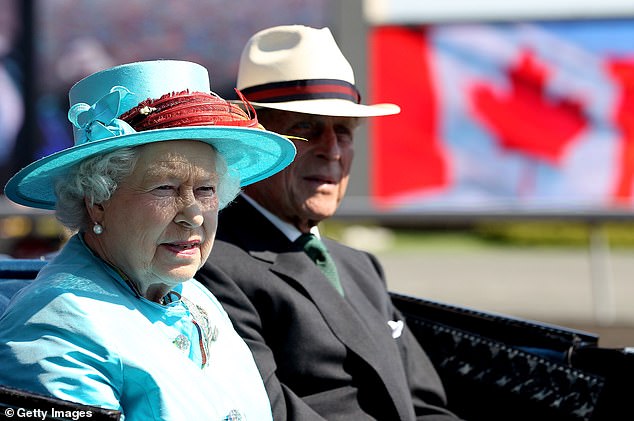 Queen Elizabeth II and Prince Philip, Duke of Edinburgh, arrive at the Woodbine Racetrack on July 4, 2010 in Toronto, Canada 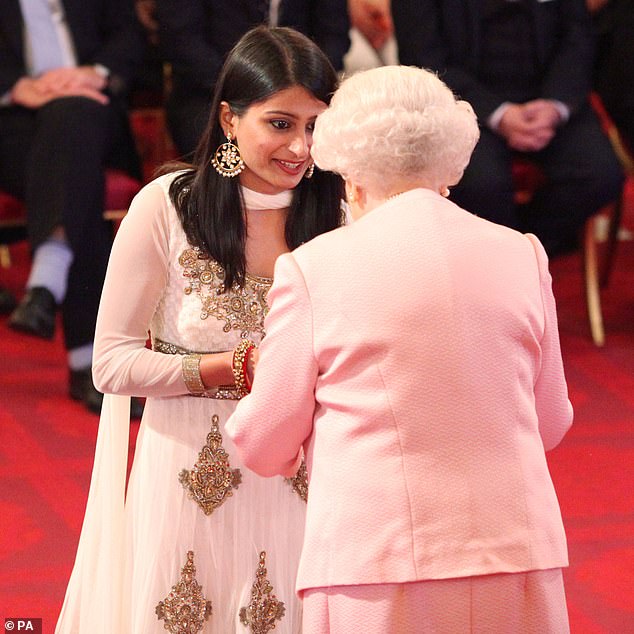 Devika Malik from India meets Queen Elizabeth II at Buckingham Palace, London during the ceremony for the 2015 winners of The Queen’s Young Leaders Awards

It comes as tens of thousands of mourners queueing to see the Queen lying-in-state at the Palace of Westminster braved the cold last night amid plunging temperatures – as the Government warned people will have to wait more than 24 hours to pay their respects in what is thought to be he world’s longest queue, which can even be seen from space.

Wait times stretched to more than 25 hours overnight as thousands of mourners wrapped up so they could keep warm and keep their place in the five-mile queue to file past the Queen’s coffin before Monday, the day of her state funeral.

It is believed that the queue to see the late monarch is the world’s longest queue in terms of distance, potentially even eclipsing the 30,000 Russians who waited to get inside the USSR’s first McDonald’s restaurant when it finally opened on January 31, 1990 after the end of the Cold War.

The queue has become so big that it even received its own BBC weather forecast this morning – a crisp 7C, while other parts of the UK hit freezing. 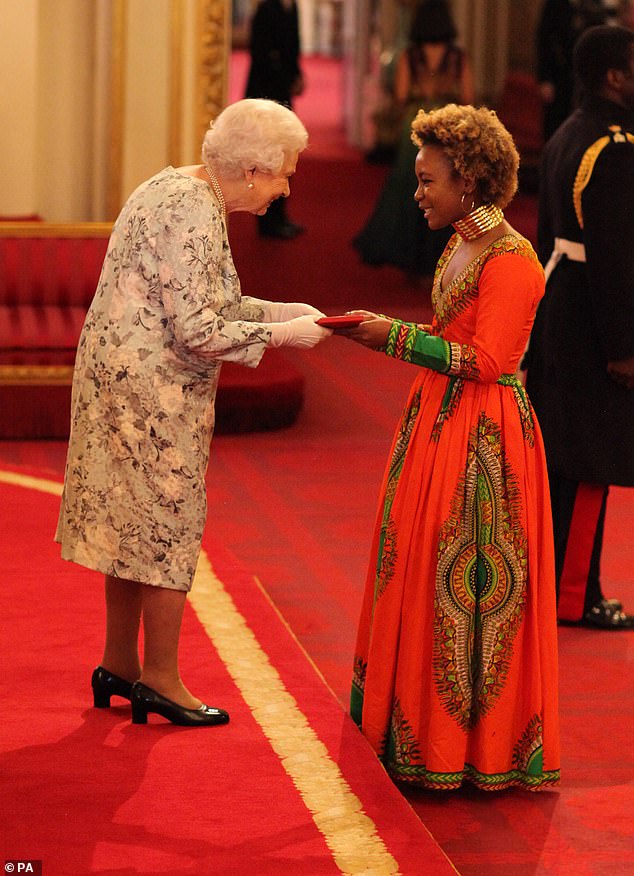 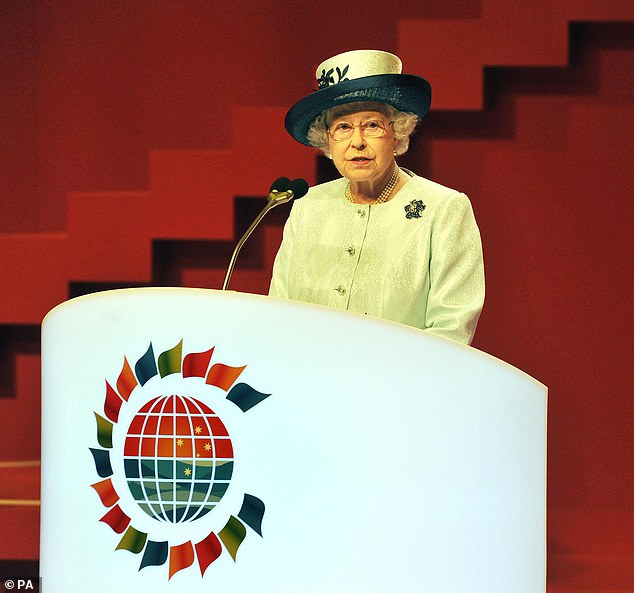 The Queen makes her speech to open the 2011 Commonwealth Heads of Government Meeting, in Perth, Western Australia

At about 1.15am today, the Department for Digital, Culture, Media and Sport’s (DCMS) online tracker said the expected wait time was at least 25 hours as people queued from Southwark Park in south-east London to pay their respects to the Queen’s coffin in Westminster Hall, about five miles away. At around 7.20am, the tracker said mourners would have to wait at least 24 hours and warned people not to travel to join the queue – and to check back later on Saturday.

However, by 8am the Government had said that the end point of the queue was once more accessible in Southwark Park.

Undeterred, a steady stream of people joined the queue last night, many wearing coats and jumpers. Tatie Kirst, 38, of Canada Water in south-east London, a project manager who had just joined the queue in Southwark Park, said: ‘Well, it’s a journey right? I think I’m prepared, I brought my good coat, I have a stool if I need to sit, I’m getting food and water, and we’re going to walk the way.

‘I think there is always a question, Is it worth it? Can I make it? And hopefully, yes. I wanted to be part of this, pay my respect to the Queen.’

The queue begins on the Albert Embankment, along Belvedere Road, behind the London Eye, then crosses Lambeth Bridge and travels along the South Bank past the National Theatre, Tate Modern and HMS Belfast, before ending in Southwark Park.

Those inside Westminster Hall were briefly shocked when a man was arrested after moving out of the queue to approach the Queen’s coffin last night. Metropolitan Police said the incident occurred around 10pm, as the live feed from inside the hall cut away for a brief period.

Final preparations are under way for the funeral, with politicians and royal dignitaries from around the world expected to arrive throughout the weekend.

It comes as the Prince of Wales and the Duke of Sussex prepare to lead the Queen’s grandchildren in standing guard around her coffin in London today – hours after their parents including King Charles III held an emotional vigil in the Palace of Westminster.