She survived on moss and grass.

The search for the body of a woman who disappeared six months ago has been semi successful — in that they found her alive.

The unnamed 47-year-old was discovered in Spanish Fork Canyon in Utah, where she had survived for half a year eating moss and grass.

In an incredible twist of fate, she was only located when a drone sent searching for her accidentally hit a tree — and when the team went to retrieve it, stumbled across her en route to the crash site.

According to the Utah County Sheriff’s Office, on November 25 of last year US Forest Service Officials were preparing for the seasonal canyon closure, when they found a car left in a parking lot of a Diamond Fork area campground.

Inside, they found camping equipment and ID information, but there was no sign of the woman who owned it.

Detectives and search and rescue officials joined the Sheriff’s team to conduct extensive searches of the area by ground and air, but they could not find her anywhere. So they deduced the car must have been abandoned, impounding it and storing the camping equipment.

Among the documentation in the car was telephone information that suggested the owner may be in Colorado, so the Sheriff’s office began focusing its search there.

Over the next several months efforts were made to identify and contact family members, without success. Detectives did manage to track down the woman’s former co-workers, but could ascertain no details as to her possible whereabouts.

“They did, however, find information that suggested this woman might struggle with mental health challenges,” the Sheriff’s office said.

It wasn’t until Sunday when a UCSO Sergeant, who is a search and rescue coordinator, returned to Diamond Fork with members of a nonprofit aerial search organization, to conduct one of their semi-regular sweeps of the area to try locate the woman, did they make the serendipitous discovery.

During one of the very first scans, the drone crashed, and the Sergeant and pilot set out to retrieve it. As they walked into the hills, they came across a tent that looked like it had been long abandoned. 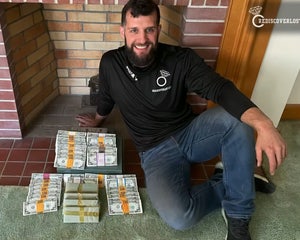 But then the zipper opened from the inside.

Out stepped the missing woman, very much alive, although she had lost a significant amount of weight and looked very weak.

She had a small amount of food with her, and told the search and rescue officials she had foraged for grass and moss to subsist. She also had access to an ample supply of water from a nearby river.

According to reports, aside from the light tent — which she herself had discovered abandoned — she also had a sleeping bag, means to make a fire, and said other campers had sometimes given her food.

Marveling at her resourcefulness, Sgt. Spencer Cannon said it would have been “very difficult to survive” throughout the winter, with temperatures dropping well below zero nightly.

Nevertheless, her situation appeared voluntary; according to the Sergeant she knowingly chose to remain in the area over the months since November 2020.

She was taken to a local hospital for a physical check-up, as well as a mental health evaluation.

“We want to be clear that while many people might choose to not live in the circumstances and conditions this woman did, she did nothing against the law,” the Sheriff’s Office said.

“And in the future she might choose to return to the same area,” they said, adding that resources were made available to her should she decide to use them.

Corpse, For, of, search, Who, Woman
World News