Boy, 7, who warmed hearts with rendition of We’ll Meet Again is ‘over the moon’ after being thanked by the Duke and Duchess of Cambridge for Royal British Legion fundraising efforts

A seven-year-old boy and his father are ‘over the moon’ after being thanked by the Duke and Duchess of Cambridge for raising £14,000 for the Royal British Legion.

Earlier this year, Noah Owen, from Bexhill-on-Sea, East Sussex, set himself a challenge to learn 102 songs with the help of his father Lee, 37, to raise money for the Poppy Appeal.

The pair warmed viewers hearts when they appeared on This Morning in November to sing Dame Vera Lynn’s We’ll Meet Again.

Today the pair received a letter on behalf of the Duke and Duchess and Lee told FEMAIL how ‘lovely’ it was to hear from the royals, after Noah was encouraged by Kate to start the challenge.

Noah is now raising money for a Myasthenia Gravis charity (MG) after his mother was diagnosed with the rare neuromuscular disease condition last year, and Lee told how his son ‘always had a smile on his face’ and never let his worries stop him from fundraising. 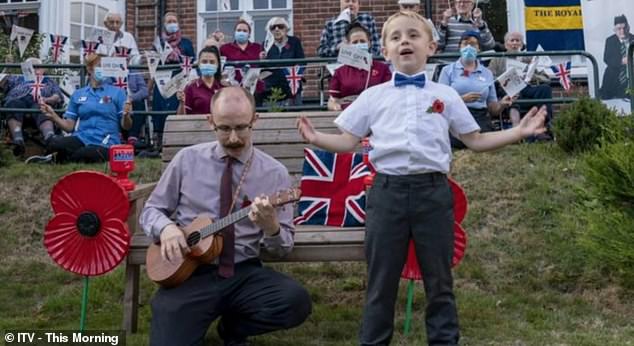 Noah Owen (pictured with father Lee in May) , seven, from East Sussex, has been thanked by the Duke and Duchess of Cambridge for raising £14,000 for the Royal British Legion earlier this year 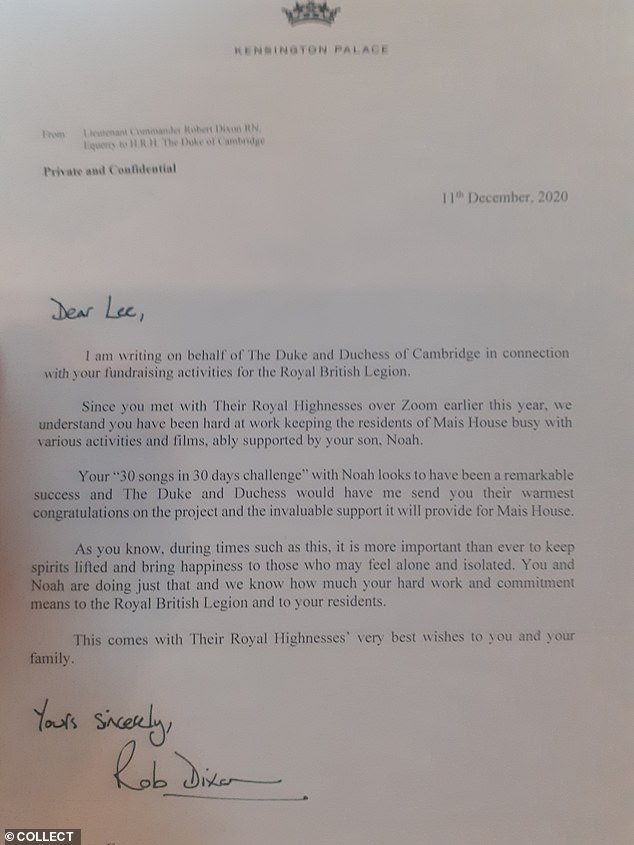 Part of the letter reads: ‘As you know, during times such as this, it is more important than ever to keep spirits lifted and bring happiness to those who may feel alone and isolated.

‘You and Noah are doing just that and we know how much hard your work and commitment means to the Royal British Legion and to your residents.’

The pair were inspired by Kate Middleton and Prince William’s video call to the Royal British Legion home Mais House, where Noah has been volunteering for nearly two years, on VE Day in May this year. 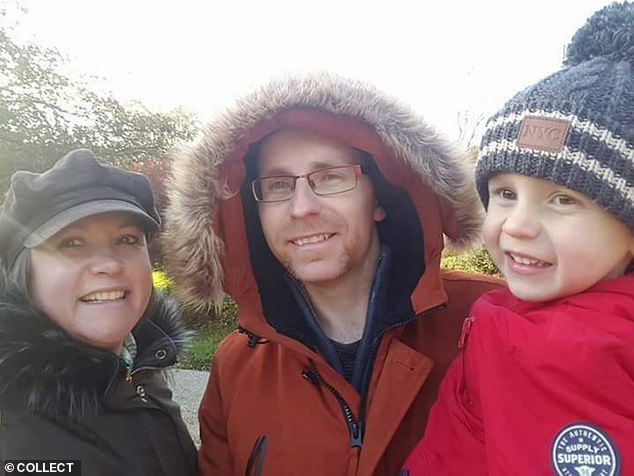 The pair are currently trying to raise money for Myasthenia Gravis charity, Myaware, after Noah’s mum Karen, 45, (pictued left) was diagnosed with the condition around a year ago

Speaking of the letter, Lee said: ‘Over the moon. It’s so nice because it was the Duke and Duchess that inspired us, after the Duchess said she’d taught [George] the words to We’ll Meet Again.

‘We’ve been saying thank you over all these different social media platforms, and so for them to send a letter is lovely, it feels like it’s come full circle.’

The pair are currently trying to raise money for Myasthenia Gravis charity, Myaware, after Noah’s mum Karen, 45, was diagnosed with the condition around a year ago.

The auto-immune muscle weakening disease, which affects about 15 in every 10,000 people in the UK, means it’s difficult for her to speak, eat, swallow or make facial expressions.

Lee has revealed how Noah kept a brave face throughout lockdown, continuing to fundraise despite worries about his mother.

‘Karen had an operation during Covid’,  said Lee, ‘There are days where she can’t speak swallow, or move really. All while this has been going on, Noah has been doing the fundraising.

‘It’s a bit of a testament to his character, to handle his mum being in that condition everyday.’

In May Karen underwent surgery to remove the thymus gland, a small gland in the chest linked to myasthenia gravis and in September underwent an Intravenous immunoglobulin (IVIG), to try and prevent her own antibodies from attacking her body. 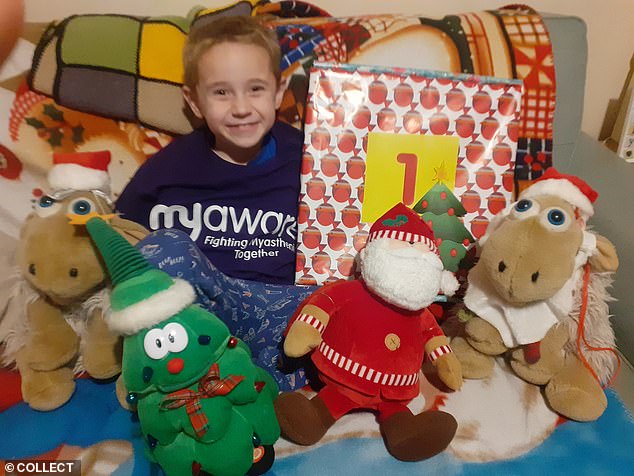 ‘She’s not doing too badly now’, said Lee, ‘She’s stable but has days when she struggles – but everyday Noah wakes up with  a smile on his face.’

Noah and Lee are trying to raise awareness for Myasthenia Gravis charity Myaware, after both Karen and Lee’s father were diagnosed with the condition.

Their new mission is to learn and sing 24 Christmas songs in different languages, which they will be sharing on their YouTube channel Father Son Fundraising, in order to raise their target of £1000 for the charity on their GoFundMe page.

‘I want Mummy to be better for Christmas,’ said Noah. ‘If lots of people are thinking about mummy getting better then Santa can make it happen.

‘I want Santa to watch my videos so he knows we need his help.’

What is myasthenia gravis?

It typically affects the whole body, spreading from the eyes and face over months or years. However, in around 20 percent of people it is localised to the eye muscles (ocular myasthenia).

Treatment helps control symptoms and it is rarely life-threatening and does not impact significantly on life expectancy.