SIDE effects of the Covid booster vaccine are likely to be worse for millions of people, data suggests.

Mixing the AstraZeneca vaccine with the Pfizer jab has shown to cause more symptoms like fatigue than any other combination. 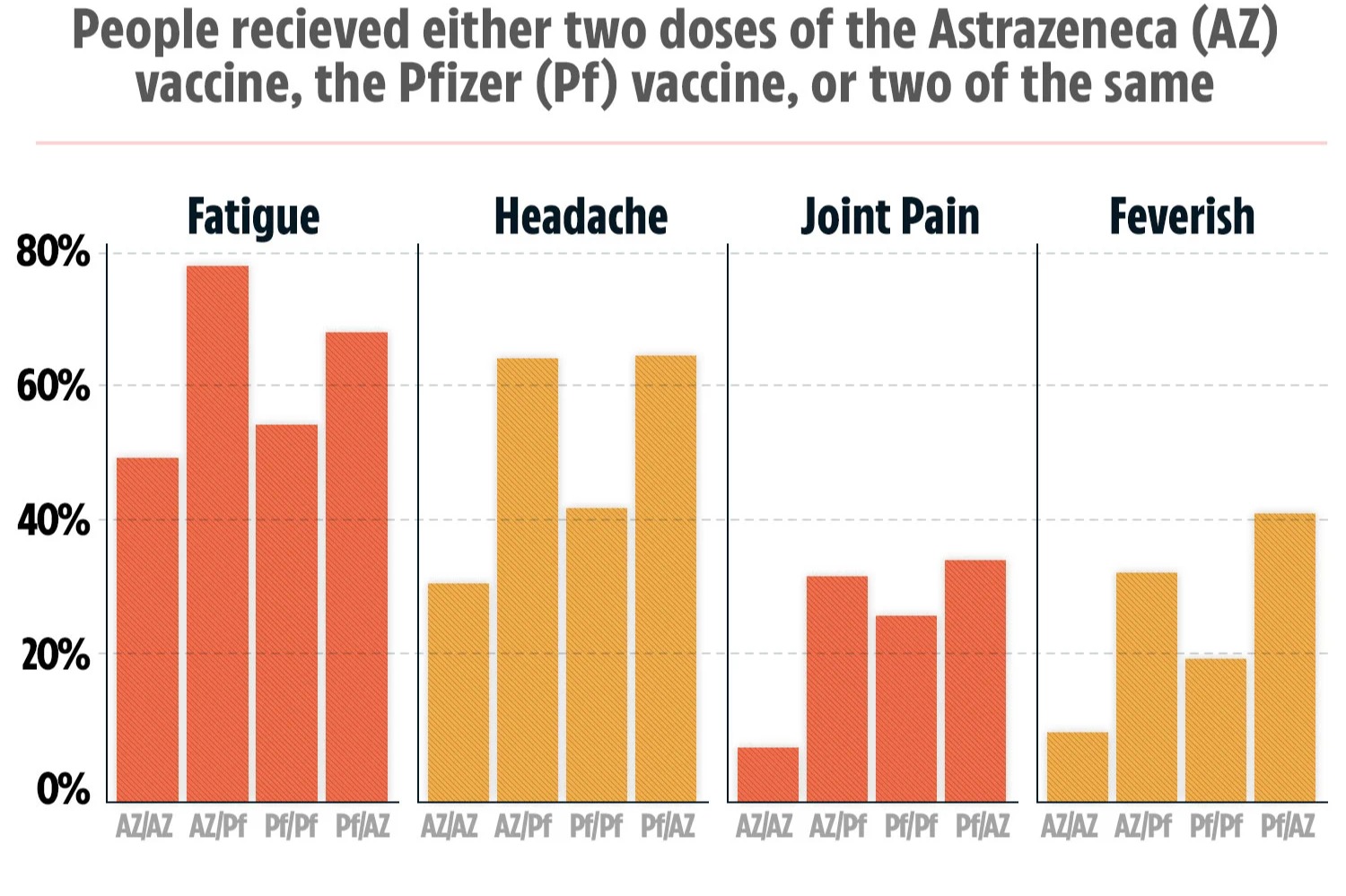 However, it is no reason to avoid getting the top-up shot, which drives protection against Covid back into the high 90s.

Side effects are only mild and do not last very long – barely two days.

It’s a small price to pay for preventing Covid infection and serious disease over a bumpy winter.

Brits eligible for a booster shot will be offered the Pfizer vaccine, regardless of what they had for their first two doses.

Trials indicated the Pfizer vaccine is well tolerated as a third dose and provides a strong booster response, according to the vaccine panel the JCVI.

But, considering two doses of AstraZeneca were given to millions of over 50s, care home residents and frontline workers, it means they will get a cocktail of jabs following their third dose.

The Com-COV study , led by Oxford University, aimed to see whether two vaccines that work in very different ways can work in tandem.

It recruited 830 volunteers aged 50 and above across England to look at four different vaccine dose regimens.

Participants were given two doses of either AstraZeneca or Pfizer, or one followed by the other (AZ then Pfizer, or Pfizer then AZ).

The volunteers were randomly assigned to one of the dosing groups and then reported how they felt in the seven days following their jab.

Findings show that in those who got the AZ jab then Pfizer, around 78 per cent had fatigue compared to the 53 per cent who had two Pfizer jabs.

Even fewer suffered fatigue when they stuck to two AZ jabs (50 per cent).

When it came to headache, some 65 per cent suffered when they mixed AZ with Pfizer.

While the study did not look at the impact of a third dose, it suggests that when sticking to the same vaccine type, side effects are more controlled than jumping between.

Prof Matthew Snape, Chief Investigator on the trial, said when the early results were published in May: “The results from this study suggest that mixed dose schedules could result in an increase in work absences the day after immunisation.”

Although spending a day or two “under the weather” is daunting, Brits can be reassured mixing doses increases their immunity against Covid.

Peter Openshaw, Professor of Experimental Medicine, Imperial College London, said: “The most interesting aspect is that the antibody responses were best with the two-dose Pfizer-BioNTech schedule, whereas the best T cell responses were in those who had the AstraZeneca followed by Pfizer vaccines.

“The study is reassuring that using a mixed vaccine approach is not only safe but can potentially give immune responses that are as good or better than those induced by single vaccine regimens.”

The UK has world-leading trial that is looking at different vaccine regimens for boosters, called the Cov-Boost trial.

However, these findings – and any data on side effects when mixing the third dose – are not yet in the public domain.

Regardless of side effects, new research continues to show the importance of booster jabs.

A study by the UK Health Security Agency (UKHSA), published this week, showed that two weeks after receiving a Pfizer booster dose, protection against symptomatic infection was 93.1 per cent in those who had initially received AstraZeneca, and 94 per cent for Pfizer.

There is not yet data for protection against hospitalisation or death, but Professor Wei Shen Lim, chair of Covid-19 immunisation for the JCVI, said it was likely to be “even higher than 93 per cent”.

Meanwhile, data from Israel indicates booster jabs could prevent Covid-19 deaths through the winter and over Christmas.

Dr Mary Ramsay, head of immunisation at the UKHSA, said: “We know that in older age groups, protection from the first two vaccines is beginning to wear off, leaving millions that need extra protection as we head into winter.

“That is why it is critical that you come forward for your booster as soon as you become eligible so we can drive down hospitalisations and deaths over the winter.”