Sussexes represent greater threat to monarchy than army of republicans

STEPHEN GLOVER: Prince Harry used interview to deepen rift between himself and his father and brother… I fear the Sussexes are now a greater threat to Britain’s monarchy than an army of republicans

Today is the Queen’s 96th birthday. And what a present her grandson, the Duke of Sussex, has given to her!

That he loves her can’t be doubted. In an interview with American journalist Hoda Kotb for NBC’s morning show Today, aired yesterday, the Prince was at pains to praise Her Majesty, especially for her sense of humour.

He also laid claim to an exceptional bond with the monarch: ‘We have a really special relationship. We talk about things that she can’t talk about with anybody else.’

If true, his rare visits must be a boon for his grandmother. Yet for all his professions of affection and uniqueness during the interview, Harry couldn’t resist a dig at the Royal Family. That, of course, constitutes a dig at the Queen, who presides over it. 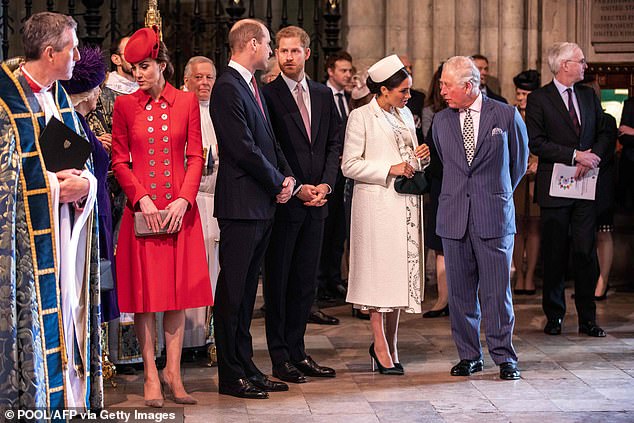 Meghan is seen speaking with Prince Charles while stood alongside Harry, Prince William and the Duchess of Cambridge at Westminster Abbey in London in March 2019 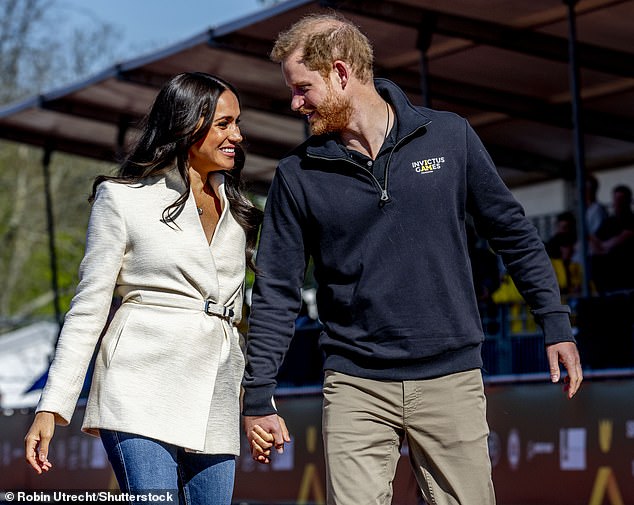 Prince Harry and Meghan are seen attending the Invictus Games athletics events in the Athletics Park, the Netherlands, on April 17

I can’t see any other interpretation of his remark that, in meeting the Queen at Windsor, he was ‘just making sure she’s protected and got the right people around her’.

Generous souls may say the Prince was simply expressing concern for her welfare, as she has not been in the best of health recently. But the 12-word utterance — ‘just making sure she’s protected and got the right people around her’ — implies that those looking after her could be doing a better job.

It is a preposterous thing to say. While Harry and his wife Meghan have been more than 5,000 miles away in California, courtiers have been working around the clock to care for the Queen, and members of her family have been visiting her.

Harry’s raising the possibility that she mightn’t have been properly looked after was an insult. Courtiers aside, several members of the Queen’s family will feel put out. Foremost among them may be Prince Charles and Prince William.

Am I reading too much into what could have been a careless comment? I don’t believe so. We should also not ignore the fact that, when the Prince was asked by Hoda Kotb whether he missed his ‘brother and [his] dad’, he dodged the question, and said he was ‘focused’ on the Invictus Games.

This is the sporting event for wounded, injured and sick servicemen and women, which has been taking place in the Netherlands. It was founded by Harry. Whatever else may be said about him, this is a great achievement.

To return to the interview, he used it to deepen, rather than repair, the rift that has grown up between himself and his father and brother. A week ago, Harry and Prince Charles met for just 15 minutes. William was abroad on holiday.

What little self-awareness the Duke of Sussex must have! He has seen the Queen only twice in two years. He was not present at the memorial service for the Duke of Edinburgh at the end of March. One explanation offered by him was security concerns. Couldn’t these be set aside for a grandfather?

And yet the absentee Prince presumes to question the competence or commitment of those who have not deserted the Queen for California, while he snubs his father and brother.

The truth is that, as he praised the Queen and advertised his love for her, Harry tossed another hand grenade into the Royal Family to follow those that have gone before. 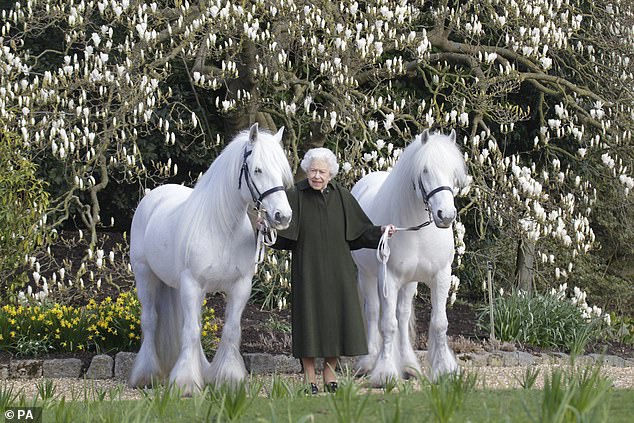 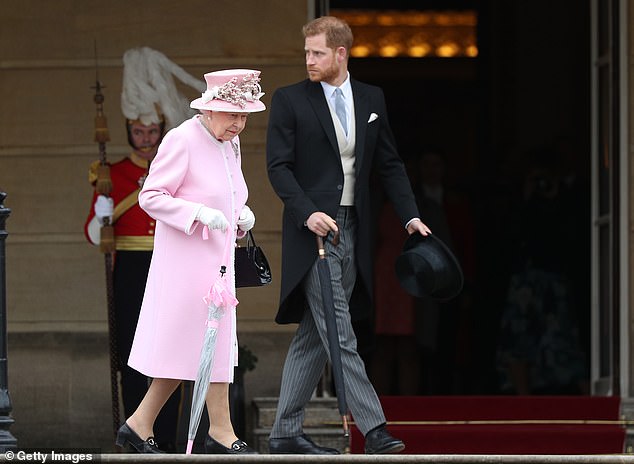 Prince Harry and the Queen are pictured attending the Royal Garden Party at Buckingham Palace on May 29, 2019, in London

The effect is to undermine the institution that the Queen holds most dear, and to which she has dedicated most of her life. During the couple’s interview with Oprah Winfrey last year, Meghan alleged that an unidentified member of the Royal Family was racist. She also — incorrectly — claimed that their son Archie had been deprived of his rightful title of ‘Prince’.

Harry accused his father of financial meanness and refusing to take his calls. William was said to be ‘trapped’. The couple painted a picture of a disagreeable and dysfunctional family — the Royal Family.

Most Britons can probably see through the Sussexes’ ruses — though the couple have some woke followers who are only too happy to see members of the Royal Family regularly battered.

In the U.S., the reputational damage may well be greater. Many probably believe that the Royal Family is racist, even though the Queen is one of the most colour-blind women alive. Americans may now fear she has been abandoned by her family.

By the way, American television media tend to be sycophantic towards the Sussexes, and lap up all sorts of nonsense. Just look at the remarkably easy-going Hoda Kotb interview.

If Harry loves his grandmother as much as he claims, he should cease these slurs against the Royal Family and try to persuade Meghan to do the same. She, who once flitted across the Atlantic for a ‘baby shower’, briefly visited Britain last week for the first time in two years. She sharpens her barbs in California.

I fear it will only get worse. Harry’s memoirs are due to be published in the autumn, and the rumour mills suggest that the Duchess of Cornwall can look forward to a pasting.

Meanwhile, the Sussexes have a multi-million-dollar deal with Netflix for a series of documentaries. One is in the pipeline about the Invictus Games. The recent meeting with the Queen could feature, though she would be portrayed in positive terms.

What is so infuriating is that Meghan and Harry continue to make millions out of their royal connections while trashing the institution that sustains them. For what would either of them amount to, without the Royal Family? 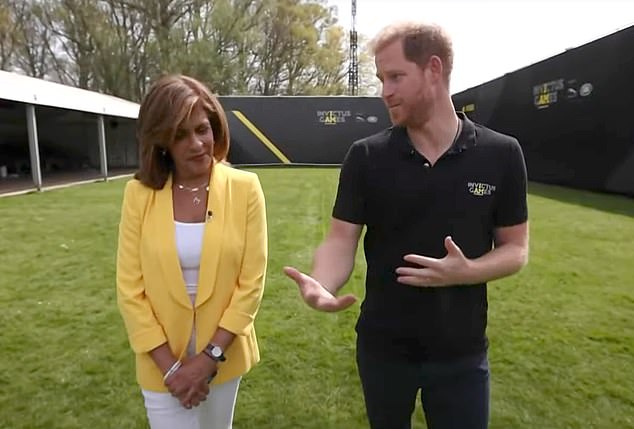 Yet they both remain desperately keen on their royal status even as they fire arrows at other royals. Nothing better illustrates this than Meghan’s behaviour at the opening ceremony of the Invictus Games.

Meghan introduced her ‘incredible husband, Prince Harry, the Duke of Sussex’. Not just plain Harry, then. At the same ceremony, she appears to have had a dig at the Queen, who is normally off-limits.

Last year, remember, Her Majesty confirmed that, having stepped back from royal life, the couple would not ‘continue with the responsibilities and duties that come with a life of public service’. Meghan hasn’t forgotten or forgiven that dismissal.

‘Thank you so much for your service,’ she told the audience. ‘And thank you to all the family and friends that are here who have been supporting you along the way. Because this is service, this is dedication, and this is the Invictus family.’

It used to be commonplace to criticise Meghan more than Harry for their excesses. She is certainly some operator. But Harry is not simply a ventriloquist’s dummy. I blame them both.

The Prince may praise the Queen but the couple don’t wish the Royal Family, or even this country, well. It’s telling that Harry won’t commit to attending this summer’s Platinum Jubilee celebrations. They will continue to snipe from the United States for the benefit of an American audience.

The Sussexes represent a greater threat to the monarchy than an army of republicans. How ironic that their fame and wealth derive from their association with an institution they seem to hate.