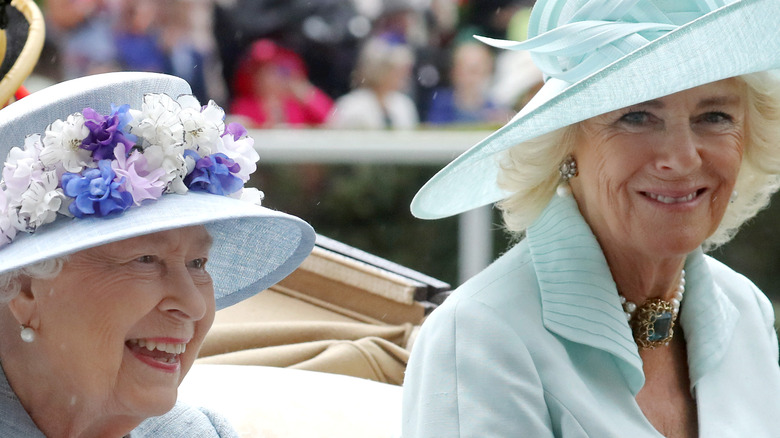 Much before Prince Charles and Camilla Parker Bowles’ 2005 Windsor Guildhall wedding, the 73-year-old Duchess of Cornwall was actually married to military man Andrew Parker Bowles for 22 years (via Town & Country). A lavish affair deemed “the society event of the year,” Camilla and Andrew’s 1973 Guard’s Chapel wedding was attended by several members of the royal family, including Queen Elizabeth herself (via Express).

As per the Channel 5 documentary “Camilla: Making of a Mistress,” Camilla’s first wedding to notorious polo player and aristocrat Andrew was “a very glamorous occasion” (via Express). In fact, the Queen Mother, Princess Anne, Princess Margaret, and Elizabeth all attended the “premiere society event” (via Oprah Daily). However, as per Express, the Queen might have had other motives to attend Camilla’s first wedding, and it wasn’t exactly just to give her royal blessing.

According to Oprah Daily, Andrew and Camilla had an on-and-off relationship for seven years before tying the knot, which included reported infidelity from both sides. While Andrew allegedly cheated on Camilla with her “close friends” and even had a 1970 fling with Princess Anne, Camilla had her own entanglements with future husband Prince Charles. Even then, Camilla and Andrew soon married in 1973, which came as an “enormous relief” to the royals (via Express).

Here's what you need to know about Camilla's first wedding 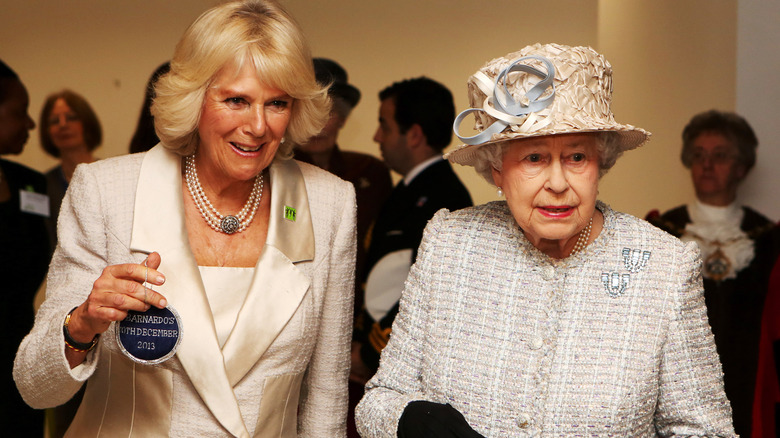 As per Express, Prince Charles’ early relationship with Camilla Parker Bowles was distressing to the royals, as she was “not considered suitable to become queen.” Even then, Charles fell head-first for Camilla during their first 18-month-long relationship. Charles was “in love” with the future Duchess, and was deeply saddened when she married Andrew Parker Bowles, telling his uncle, Lord Mountbatten, about how troubled he was that “such a blissful, peaceful and mutually happy relationship” had ended (via Marie Claire).

Some outlets sustain that Queen Elizabeth conspired for Camilla to meet Andrew to get her out of Charles’ way. The hit Netflix series “The Crown” depicts a meeting between the Queen, Prince Philip, the Queen Mother, and Princess Anne to discuss the match between Camilla and Andrew, but some royal sources argue the idea is “laughable” (via Vanity Fair). Whatever happened behind palace doors, senior members of the royal family reportedly attended Camilla and Andrew’s wedding “just to make sure it really happened” (via Express).

While the “Camilla problem” seemed to finally be over and done with, Charles notoriously chose not to attend the wedding. While royal experts say it must have been “very hurtful” for him to know the love of his life was marrying another man, the two couldn’t let each other go — the dynamic led Princess Diana Spencer to eventually say in her infamous BBC interview, “There were three of us in [the] marriage, so it was a bit crowded.”