History just repeated itself when BTS showed up on The Late Show with Stephen Colbert on May 15 and paid major homage to The Beatles. The seven-member boy band — Jungkook, Jimin, V, Suga, Jin, RM, and J-Hope — transformed into that other infamous batch of mop-topped heartthrobs. You know, the one made up of John Lennon, Paul McCartney, Ringo Starr, and George Harrison. And lemme tell you, their metamorphosis was nothing short of amazing. Unless you want to call it "amaze" like all the cool kids do. Anyhoo, have y’all seen the video of BTS performing on Late Show With Stephen Colbert yet? Because their take on the Fab Four’s U.S. television debut on The Ed Sullivan Show was so on-point that you will legit think it’s February 1964 all over again.

OK, so the episode started off with a black-and-white cold open on the stage of the Ed Sullivan Theater, which is coincidentally where Colbert films his show and where The Beatles made their U.S. television debut. The Late Night host was dressed up as Sullivan, of course, and the whole thing was just too perfect.

"And now, on the same stage 50 years later, plus 5 years, 3 months, 6 days, a new batch of mop-topped heartthrobs has landed," a voiceover explained. 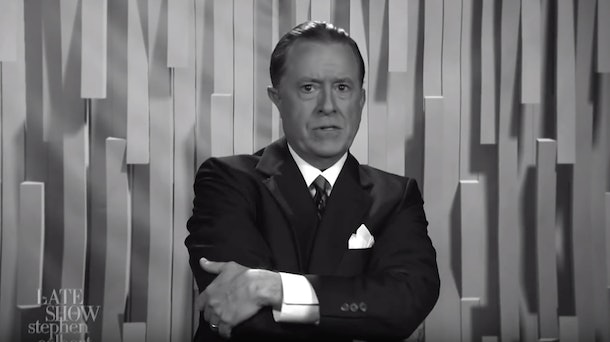 "Ladies and gentlemen, tonight we’ve got a big, big show and it continues," he began, nailing Sullivan’s mannerisms. "You may have heard there’s a new musical craze sweeping the globe. These fellas are really something, and people are so excited, you can only call it BTS-mania. These boys aren’t from America. No, they’re from across the pond — the big one. The one with Hawaii in the middle. They’re really a fine group of youngsters. You can call them the Fab 7. It’s got a nice ring to it."

Here’s what the marquee looked like outside the theater, BTW: 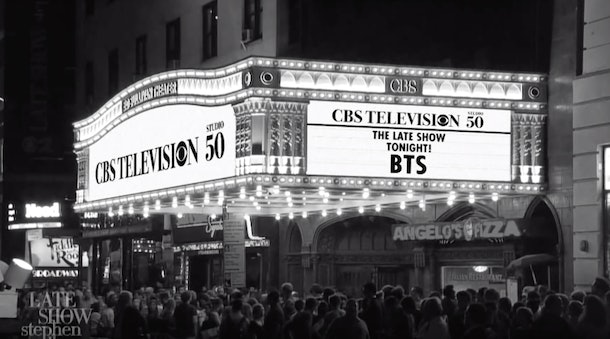 Back inside, Colbert had the band members introduce themselves one-by-one. 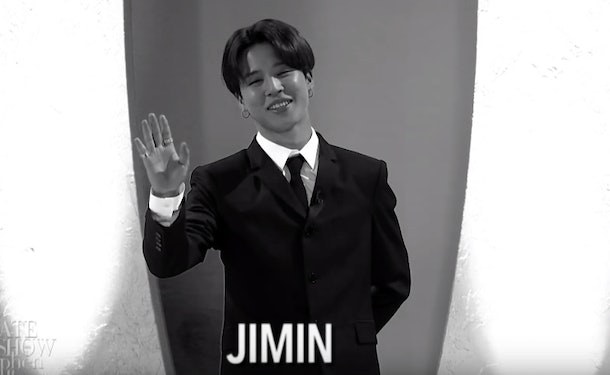 Colbert then joked that each of the seven members was "the cute one," as the camera zoomed in on their adorable faces. 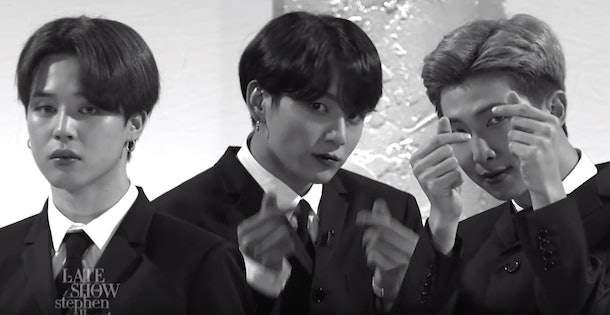 You can watch the entire cold open here:

Later, BTS perfectly channeled John, Paul, George, and Ringo in their black suits as they performed their hit single "Boy With Luv" in front of a Beatles-inspired drum set that said "BTS" on it! It was so ’60s!

According to People, the idea for the throwback segment came about because not only does Colbert film his show at The Ed Sullivan Theater, but BTS has frequently been compared to The Beatles, thanks to the fact that they are the first group since the Fab Four to have three No. 1 albums in less than a year.

So when the boys came to sit down for an interview, Colbert couldn’t help but ask them if they had a favorite Beatles tune. In answer, all seven of them — led by J-Hope — began an impromptu performance of "Hey Jude."

You can (and most definitely should) watch it all go down at around 2:54:

After the show. Colbert hit up Instagram to post a selfie with "seven of my closest global superstar friends."

Just me and seven of my closest global superstar friends.