Top News Corp executive Siobhan McKenna has been appointed chair of the Australia Post board, stepping into the role on Thursday after Lucio Di Bartolomeo stepped down late last month when his term ended.

McKenna’s appointment follows a tumultuous period for the postal service, which included the Cartier watch scandal and controversial departure of executive Christine Holgate. 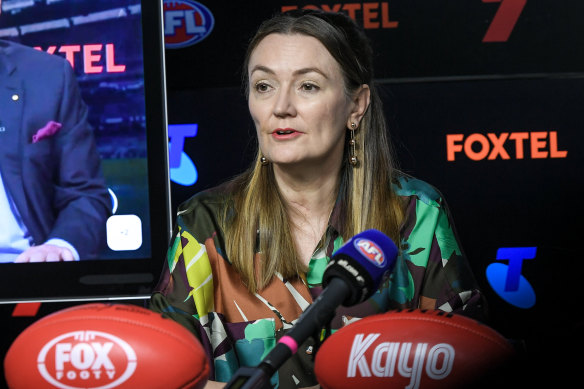 Holgate received a $1 million payout but no apology from Australia Post following her downfall after she disclosed four senior employees received $20,000 Cartier watches as bonuses in 2018.

Earlier this year, Di Bartolomeo defended rewarding senior staff with bonuses averaging $170,000 in 2020-21, saying it was part of contractual remuneration arrangements. Australia Post paid more than $78 million in bonuses to about 2700 employees that year.

Australia Post also struggled through the boom in parcels through the earlier stages of the pandemic, and in September announced it would close 30 branches across the country as in-person visits decline while online demand continues to surge.

McKenna has been group director of News Corp’s broadcasting arm since 2016, and is chairman of Fox Sports, Foxtel, Sky News, and Nova Entertainment. She is also a Woolworths director and director of investment management firm AMCIL.

“Ms McKenna’s knowledge, leadership and experience will help support Australia Post as it modernises and adapts to meet shifting consumer demand. The government looks forward to working with her in her new role,” the ministers said in a statement.

Gallagher said Australia Post provided an essential service for businesses and Australians, particularly in regional, rural and remote parts of the country.

Rowland said the government looks forward to working with McKenna and thanked Di Bartolomeo for his service.

“The appointment of Ms McKenna and her extensive experience in corporate governance will help support this treasured national institution in achieving these important outcomes,” she said.

McKenna has previously been chair of the NBN Co and a commissioner of the Productivity Commission. McKenna is also the author of Man in Armour, a novel about the “brutal world of investment banking” that was published in 2020.