Victoria’s first professor of psychiatry Brian Davies, who taught a generation of University of Melbourne medical students and postgraduates, has died aged 92.

His quiet, diffident and, at times, enigmatic nature resulted in a leadership style that enabled department staff to feel free to pursue their research passions while also being gently guided and supported yet nudged when necessary.

The department he led quickly gained an enviable reputation for wide-ranging quality research, excellent teaching, and state-of-the-art treatment and caring of patients.

The son of a Welsh coal miner, he followed his brother, who was older by six years, to Cardiff University Medical School. His medical training included just one lecture in psychiatry, and he said: “I wasn’t interested – in those days psychiatry was the last chapter in the medical textbooks – I just wanted to be a physician like my brother.” 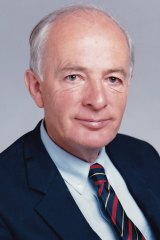 Having completed physician training, Brian asked senior colleagues for advice regarding what should be his next career step. “Do psychiatry training, psychiatry will be big in four years,” was the advice.

Brian was able to secure a training position at the prestigious Maudsley Hospital, London, where he worked in the unit of Professor Sir Aubrey Lewis, an Australian psychiatrist who had become a towering figure in UK psychiatry. Over the next eight years at the Maudsley and Bethlem Royal Hospital, Brian immersed himself in the newly emerging and exciting field of research into anti-depressants. He published world-leading research on tricyclic and monoamine oxidase inhibitor anti-depressants.

By 1963 Brian had decided to take a position as a consultant in London but the UK government “froze” all new consulting positions in England. He subsequently took advice to apply for “an interesting opportunity” in Australia as the inaugural Cato professor of psychiatry at the University of Melbourne and was duly appointed.

Brian, his wife and two children, arrived in Melbourne in April 1964 after a four-week sea journey. He then began planning the new Melbourne University Department of Psychiatry associated with the Royal Melbourne Hospital.

To the end of his tenure 26 years later, he steadfastly focussed his energies in three main areas: teaching students and postgraduates; service provision – seeing and treating many patients; and facilitating quality research.

In his typically humble way, Brian attributed the fact he was able to attract excellent people to accept positions in his department, to “good fortune” rather than the fast-developing reputation of his department as a centre of excellence. The Cato chair became, arguably, the most prestigious chair of psychiatry in Australia with staff having received many Australian commonwealth (and one New Zealand) honours.

In 1968, Brian delivered the Beattie-Smith lecture, the highest honour that Melbourne psychiatry bestows on its leaders. His topic was “Recent Studies of Severe Mental Depressive Illness”.

The postgraduate psychiatry trainees in Brian’s unit learnt much from observing him assess patients, quickly and efficiently, focusing on the most salient aspects of their presentation and demonstrating his renowned clinical acumen. To many, he became a mentor as well as a teacher. He expected much but also returned loyalty and support.

He led, not by acting as a loud front man, forever talking up the achievements of his “empire”, but more as an avuncular encourager and facilitator, open to good ideas but willing to guide and advise when required.

He had very little “small talk” and colleagues could sometimes feel he kept them at a distance. This was more to do with his shy nature than any personal dislike. Persistence in pursuing issues with Brian was often rewarded with knowledgeable and helpful suggestions, advice and encouragement.

Medical student teaching was always afforded a top priority by Brian. He wrote a classic student textbook that went through four editions from 1966, An Introduction to Clinical Psychiatry. It remains well known to a generation of Australian medical students and psychiatrists.

After retiring from the Cato chair in 1990, Brian continued to work in private practice, at the Melbourne Clinic and elsewhere, finally retiring in 2009, at 81.

Brian married Rona, a nurse, in 1951, beginning more than 67 years of loving marriage that ended in 2019 with Rona’s death. Brian also developed an enduring love of golf, and became a skilled and well-known player at Royal Melbourne Golf Club, actively participating until his last year.

Reading was his lifelong passion, his taste extending over many genres. He had a love for, and a deep knowledge of, Shakespeare.

In recent years, Brian had delighted in reconnecting, at regular lunches with many former work colleagues from his time as Cato professor. He remained humble, continued to be somewhat uncomfortable when publicly praised and never sought special recognition or honours for himself.

To his psychiatry colleagues, Brian was a trailblazer of Australian academic psychiatry who aided the training and career development of many. To a generation of students, he was a doyen of psychiatry. To himself, he was just a golf-loving psychiatrist who enjoyed his work and was pleased to have helped patients, taught psychiatry and encouraged worthwhile research.

He leaves a loving daughter and son and 3 admiring grandchildren.

Roger Glass acknowledges help from Brian’s family and colleagues in writing this tribute.