Do you think THIS week is freezing? It’s nothing compared to the age when snow pulled down trees, there were icebergs in the Bristol Channel… and it lasted for SEVEN decades

Staring fearfully into the night sky, the residents of 16th-century Bristol watched as what seemed to be a sinister omen flashed across the heavens.

One observer likened it to ‘beams as red as fire coming out . . . of a furnace’.

We now know this to have been the Northern Lights, which are sometimes visible as far south as Cornwall. But before such things were understood, it seemed no coincidence that there followed a long and relentless series of freak weather events.

With devastating floods and snowfalls heavier than anyone could remember, as well as unseasonal tempests, droughts and crop failures, many believed humankind had incurred God’s wrath.

In fact, the world was suffering the effects of volcanic eruptions in the Americas which pushed dust and gases high into the atmosphere, blocking out the sun and resulting in a long period of severe cooling. 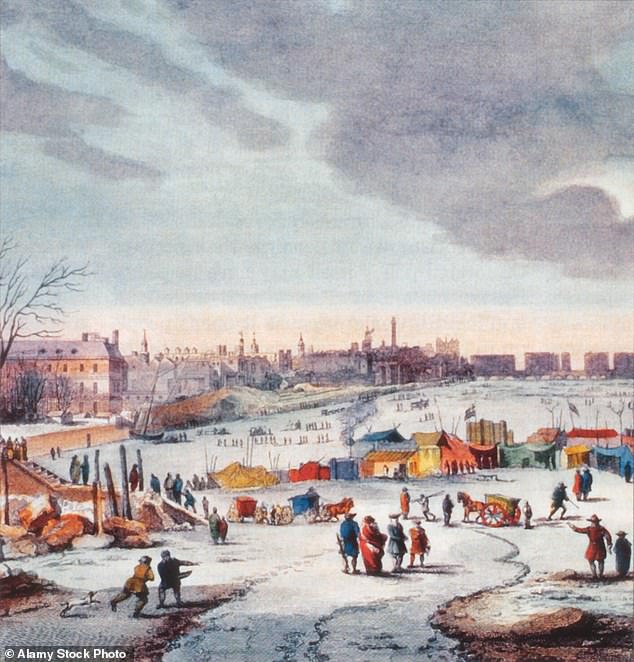 With devastating floods and snowfalls heavier than anyone could remember, as well as unseasonal tempests, droughts and crop failures, many believed humankind had incurred God’s wrath

Since named the Grindelwald Fluctuation, after a Swiss glacier that expanded to provide one of the clearest signs of a chillier climate, this scourge of the Elizabethan and Stuart eras spanned seven decades between 1560 and 1630.

Disrupting other important ‘climate determinants’ such as jet streams, it caused weather that was not just cold but extremely erratic — as described in a newly deciphered chronicle of the time.

Written by an anonymous weather enthusiast who is thought to have lived in Bristol, it was acquired by the city’s archives in 1932 but deemed too fragile to be handled.

Now, some 450 years after it was first penned, historians at the University of Bristol have been allowed to photograph and painstakingly transcribe it.

A study that appears in this month’s edition of Weather, the journal of the Royal Meteorological Society, brings together the chronicler’s observations with those of William Adams, another local scribe of the era, to provide vivid descriptions of what ‘Anon Bristol’ called ‘this strangely altered time’.

Coinciding with its publication comes news that we have just experienced the coldest January for ten years, and that parts of the UK have been enduring blizzards to match those of the 2018 ‘Beast from the East’. There are flood warnings or alerts in more than 160 areas.

Even in the modern age, such weather causes disruption and fatalities. So imagine the terrors it brought at a time when the howling winds and hurricanes depicted in William Shakespeare’s play The Tempest, then hot off the press, were an all-too-familiar torment.

Through these accounts of the Bristol weather, we get a picture of what was happening in the rest of the country, starting in November 1564, a month after the Northern Lights were sighted.

Then, the River Avon near the Severn Estuary was ‘frozen so hard that mariners & others went over dry shod’.

By the following February, this ‘grete freese’ had resulted in the loss of water supply to Bristol. But soon people would be complaining about too much water — a series of cold, wet summers in the 1590s led to failed harvests and the last major famine in England.

According to the anonymous chronicler, a previous famine in 1315 had caused ‘such mortality that horse flesh and dogs flesh was accounted good meat, and some ate their own children’. 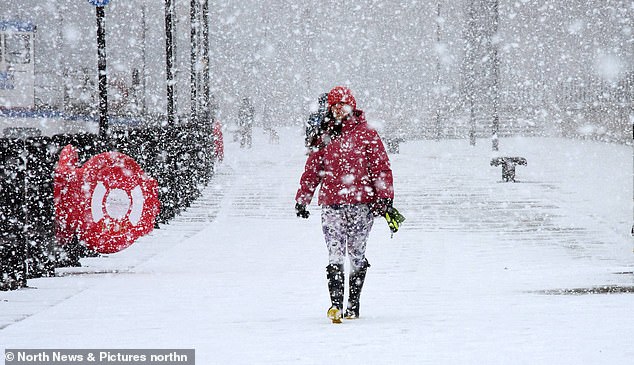 Even in the modern age, such weather causes disruption and fatalities. So imagine the terrors it brought at a time when the howling winds and hurricanes depicted in William Shakespeare’s play The Tempest, then hot off the press, were an all-too-familiar torment

There were no such terrifying reports this time but ‘in the city of Bristol all sorts of grain were very dear so that the poor were in very great want’.

In October 1603, ‘the greatest snow that was ever known by the memory of man’ fell on the city. It was so heavy that trees ‘were thrown down by the roots, and the limbs and boughs of many others were broken in pieces’.

Next came the Great Flood of 1607, when a storm caused a 25ft wall of water to surge up the Bristol Channel at about 30mph.

Flooding some 200 square miles of land on either side of the Severn Estuary, it claimed the lives of 2,000 people and countless farm animals. William Jones, a Welsh writer of the time, described how survivors included a five-year-old boy who clung to the floating corpse of a sheep as a buoyancy aid, and a milkmaid who was rescued from a bank by ‘two lustie strong men’ who managed to make a boat from a water trough.

In Bristol, the sea ‘drowned the Cattle and carryed away the Corn and hay, and people to save themselve were obliged to abide on the trees two or three days’.

Later that year came a winter so severe that in London it led to the first of the famous Frost Fairs, with about three quarters of the city’s population enjoying the novelty of a stroll on the frozen Thames.

‘People showed great trust,’ wrote the dramatist Thomas Dekker. ‘The citizen’s wife that lookes pale when she sits in a boate for feare of drowning thinkes that here shee treades as safe now as in her parlour.’

Out on the ice, some enjoyed archery, football and wrestling matches, while others were content just to slide around, get drunk on gin and visit stalls set up by enterprising merchants.

That freeze lasted from November 1607 to February 1608 and the Rivers Severn and Wye were ‘so hard frozen that people did pass on foot from one side unto the other and played gambols and made fires to roast meat upon the ice’.

When the snow there finally began to melt, ‘there came swimming down with the current of the tide great massy flakes of ice, which endangered many ships that came up the Bristol Channel’.

Sailors faced yet more peril when in 1610 ‘the winter proved very stormy in so much that it occasioned the greatest shipwrecks that ever was known in England.

‘In Kingroad near Bristol a great Flemish ship that came from the Indies richly laden with spices and other rich commodities was cast away in sight of the point. She divided in two . . . and the men were all drowned by reason of the storm.’

Yet the summer of 1611 ‘was the driest time that any man then living ever knew’. All the grass ‘dried up . . . which starved many cattle’.

In 1612 ‘the winter proved very hard and stormy that it shook most of the houses in the City of Bristol’, while a London news pamphlet of 1613 summarised the nation’s accumulated sufferings.

‘We have within these few years been most grievously stricken… by dry summers, and parching heats, droughts . . . to cause barrenness with scarcity, then freezing and cold winters’.

Such conditions did not let up until the final years of the Grindelwald Fluctuation, William Adams of Bristol describing how the summer of 1625 was ruinous for farmers.

It was so ‘wett and rainy’ that ‘the King commanded a Fast to be kept Solemnly throughout the Realm upon the 3rd day of August. The same day it pleased Almighty God to send us fair weather which held a considerable time.’

In 1643, the invention of the barometer by the Italian physicist Evangelista Torricelli would help people take the first steps towards a more scientific understanding of the weather. But for all our advanced modern technology, the conditions described in the Bristol chronicles may hold lessons for today.

Environmental scientist Professor Anson Mackay, of University College London, a co-author of the study, points out that modern climate change isn’t just making the world warmer. ‘It is also causing more severe weather, which will only get worse,’ he says.

Recent examples include the temperature of 18.7c (66f) reached at Achfary in the Scottish Highlands on December 28, 2019 — the highest ever recorded in the UK for that month — and last February’s floods in the Severn Valley.

‘If this proves correct, the news headlines of the future could be as bleak as those of the 17th century.’

Compared, is, Nothing, This, Week:
World News