Home » What it feels like… to become an amputee

I was on my way to meet a friend for lunch in London in September 2019, filled with excitement about returning to Leeds University the very next day. I was rushing, as per usual.

When I came to an unfamiliar junction in Clapham, I stepped onto the road and heard someone shout ‘stop!’ I felt a stranger’s arm trying to pull me back and in my periphery, I saw something red coming towards me at speed.

The next moment I was on the ground; I was in pain, but not excruciatingly so. I had been hit by a bus.

My first thought was that it was inconvenient and I was going to be late for lunch but I saw that people were crowding around me; I then realised what had happened was more serious than I thought.

I looked down at my right foot. The bus’s wheel had run over it – it was completely crushed and my toes had fallen off.

I was in total shock. I kept looking down at my foot in disbelief; one woman kept saying ‘for your own sake, don’t look down.’ Another woman, who was a paediatrician, used a belt to stop the bleeding. Someone else called an ambulance.

The shock and adrenaline delayed the pain – and it was only when the fire brigade and ambulance turned up that the severity of the situation hit me. I was given gas and air and they poured water all over my leg and my foot. It was excruciating. I started shouting and crying.

When I arrived at the hospital, I was in so much pain I was hysterically shouting: ‘please get it (my leg) off, please get it off.’

I went straight into an eight-hour operation. To prevent my leg from being infected, I had an emergency amputation from my ankle. 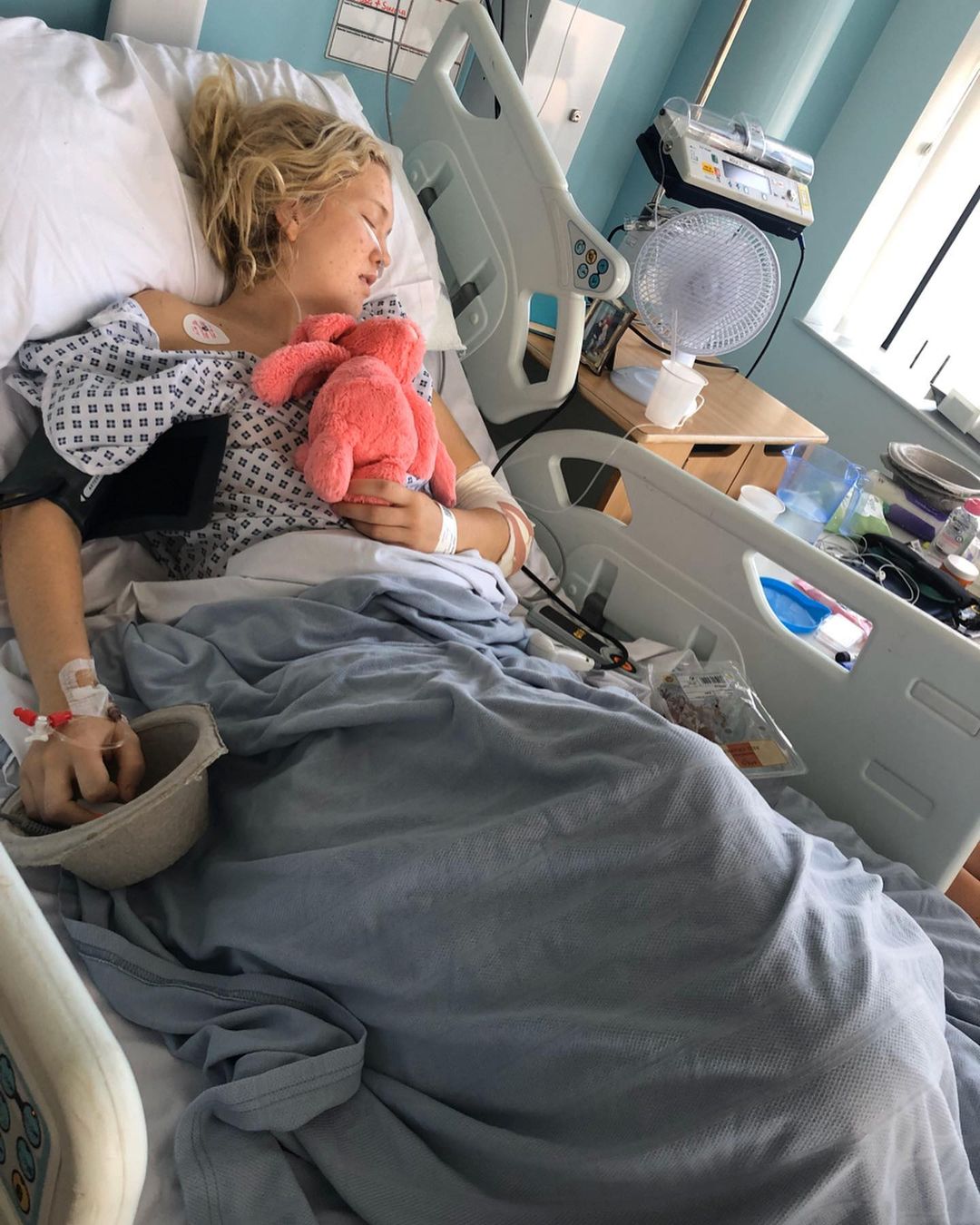 When I woke up after the amputation, I looked down and saw that my foot was gone. I was on so many drugs that I couldn’t really process what had happened. But I remember feeling relieved that I wasn’t in pain anymore.

That was the only thing I could focus on.

Two days later, I had another amputation – 10 centimetres from my knee – so my leg could fit the prosthetic leg better.

Those three days are hazy. I remember the doctor explaining why they had to amputate. I was on so many drugs at that point I agreed without too much thought.

My sister Lucy was with me when I spoke to the doctors, and even though I don’t remember much of these conversations, I remember feeling very safe. Lucy was very calm and reassuring; I saw a different side to her during those first few days.

It wasn’t until after the second amputation that I started to understand my new reality. I hadn’t just lost my foot, half my lower leg had gone. I thought my life was over and I was only 22.

I had no idea what was possible for a life on an amputee; I thought I wouldn’t be able to walk properly, dance or wear my favourite shoes, Doc Martens.

Instead of feeling bitter and thinking ‘what if’, I reasoned the surgeries were crucial for my survival.

The doctors had explained that my foot was unsavable as the skin had completely come off. If I had decided against amputation, I would never have been able to walk again and would have been in pain for the rest of my life.

I spent six weeks in hospital, where I felt calm and assured that I was receiving the best care. I started physio from my bed – simple exercises that moved my leg up and down – two days after my second operation.

I spent five days sitting at the end of my bed and bending my leg, which felt strange and a lot lighter. My leg was so swollen at this point that it looked like a butternut squash, but as I was on such strong medication, I couldn’t feel the pain.

On my fifth day in hospital, I graduated to a wheelchair. It was a big moment when I wheeled myself down the corridor. Within a week of my operation, I headed to the gym to learn to walk again.

Taking my first steps felt immeasurably strange. I found it difficult to balance and had no strength in my right leg. It was emotionally and physically exhausting.

After being in hospital for three and a half weeks, I moved to a rehab centre with other amputees for an intense month of physio.

In the first few weeks, we did group exercises, which involved light weights. I worked out on the bike machine and played wheelchair basketball to improve my core strength.

I was a determined student and refused to let my disability hold me back. During my last week at the centre, to my delight, I received my first prosthetic leg.

It was a relief being able to walk again but as my leg was still swollen, it was very uncomfortable and painful. Walking with the prosthetic really hit home how long the whole process was going to take.

On the first day wearing my new leg, I faced my fears and boarded a London bus. It was a really important thing for me to overcome.

The difficulties began when I emerged into the real world. I had been in an environment with flat surfaces and ramps; outside the hospital, there were uneven pavements and stairs. I wasn’t used to people staring and I had flashbacks every time I saw a red bus.

My leg was still recovering from the massive operation, which meant walking was still frustratingly painful. When I was in agony, I would have to take my prosthetic off. I found this humiliating as I didn’t want to draw attention to my disability.

I naively thought my recovery would be an upwards trajectory. I so desperately wanted my life to get back to normal.

In January last year – three months after my accident – I packed my wheelchairs and prosthetic leg and set off to university.

Although this was a huge milestone, this was when I was at my lowest. The house I shared with friends had four flights of stairs.

Although my bedroom was on the first floor, I had to climb four levels to access the kitchen.

Then, one day in mid February, I fell out of my wheelchair and hit the bottom of my stump. It was excruciatingly painful.

My leg was still sore and recovering so it really set me back. I had internal bruising and became bed-bound for a month. Then, just as I was recovering from my fall, the pandemic hit and my mental health seriously plummeted.

It’s normal for amputees to suffer depression after the six month mark, so it’s unsurprising that I felt so low around this time. My flatmates – three other girls – and I stayed in Leeds throughout the first lockdown.

Although the pandemic was mentally hard, it meant I could recover in private and my flatmates were constantly around me. However I remember finding it difficult that my friends’ lives had stayed the same, while I had changed so much.

When my mum came to visit, I told her I was scared of my thoughts and that I wanted to end my life. I cried that I didn’t feel physically strong enough. I couldn’t do it anymore.

She told me I was much stronger than I knew and would get through it. She was right; my dad died in 2004 when I was seven years old in the tsunami in Thailand. Experiencing something so tragic at such a young age has made me strong and wise beyond my years.

I started seeing a therapist and was prescribed antidepressants. Within three months, I felt more like myself. Today, over a year and a half after the bus hit me, I have a completely different outlook on life.

I was seconds away from death so I feel immense gratitude that I am still here. I lost my leg but I didn’t lose my life.

All of my previous anxieties have disappeared and I feel happier than I did before the accident. I’ve started a blog, called The Grateful Peg, and have connected with other amputees on Instagram. We all share this burning positivity: we want to show people that life is wonderful and worth living.

I now walk 5k twice a week and have managed to do my favourite thing: dancing. On New Year’s Eve, I used my stick as an anchor and was able to wiggle around it. The first night I danced, I knew I had my life back.

It took me a while to embrace my prosthetic, which I fondly call ‘Peg.’ I was very self-conscious the first time I wore a dress but now I love the way it looks. I couldn’t imagine my life without it.

I don’t want to hide my prosthetic – it’s part of who I am. I want to wear it and be proud.

As told to Harriet Kean.

In this exciting new series from Metro.co.uk, What It Feels Like… not only shares one person’s moving story, but also the details and emotions entwined within it, to allow readers a true insight into their life changing experience.