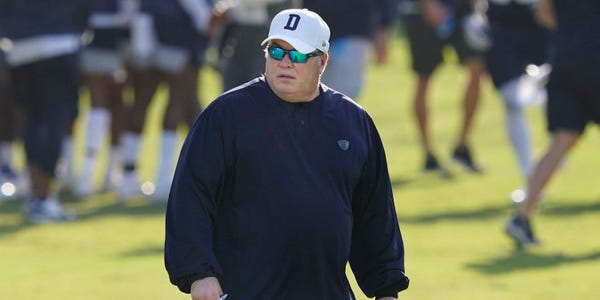 Just six games into his tenure as Dallas Cowboys head coach, Mike McCarthy is already facing questions about how well he prepares his teams.

The Cowboys fell to 2-4 in Week 6 with an embarrassing 38-10 loss to the Arizona Cardinals. The Cowboys have now given up at least 30 points in five straight games, and their offense, which was supposed to be dynamic, ranks fourth in total points scored but just 24th in DVOA, an advanced metric that takes into account averages, opponents, circumstance, and more.

According to NFL Network's Jane Slater, Cowboys players are grumbling about the team's coaching and their preparation for games.

Speaking to reporters on Tuesday, McCarthy said he'd prefer that players keep complaints in-house and speak to him about any potential issues.

However, the Cowboys players' complaints about a lack of preparation must come as a bit of bitter irony for McCarthy. In January, when McCarthy was being introduced as the Cowboys new head coach, he told reporters that he hadn't really watched every snap of the Cowboys' 2019 season, as he had told team owner Jerry Jones.

McCarthy may have said that in jest, but preparation was nonetheless a big part of McCarthy's appeal. After being fired by the Green Bay Packers in 2018 after 13 seasons, McCarthy had spent his year away from the NFL studying the game, new trends, and analytics to further his knowledge and right some wrongs from his time with the Packers.

Injuries and turnovers plague the Cowboys

It's difficult to separate coaching from player execution, which may go double the Cowboys this season.

The Cowboys have already suffered major injuries to important players like quarterback Dak Prescott, much of their starting offensive linemen, and linebacker Leighton Vander Esch. Monday's loss to the Cardinals was the first time the team started the same offensive linemen group in two consecutive games. Then starting guard Zach Martin suffered a concussion.

And the Cowboys have been hurt by turnovers worse than any other team in the NFL. The Cowboys' -12 turnover differential is worst in the NFL, with 6 interceptions and 9 fumbles. Their inability to convert on fourth down has also contributed to their turnover woes.

Ezekiel Elliott fumbled on back-to-back possessions in Week 6, resulting in two touchdowns for the Cardinals.

On Monday, McCarthy harped on the team's turnovers, saying it's a poor reflection on him.

"I have a continuing issue with ball security on my football team," McCarthy said after Monday night's game. "That's something I personally take a lot of pride in and how it reflects on how you play the game of football. I'm not getting it done right now."

Still, the Cowboys are alive because of the NFC East's futility. The Cowboys lead the NFC East at 2-4. With upcoming games against the Washington Football Team and Philadelphia Eagles, the Cowboys could put some space between themselves and the rest of the division.

But if Dallas loses either or both of those games, McCarthy could find himself in hot water just halfway through his first season.