Perhaps the most endearing thing about Emma McKeon – there are a few strong options – is that she somehow still feels like a character in someone else’s screenplay.

For years now, she has been stockpiling medals at major meets like she was prepping for swimming doomsday. By and large, that business had been conducted with minimal fanfare until it all went into overdrive during her heavenly week at last year’s Olympic Games. 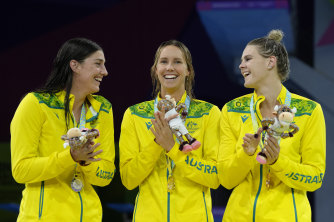 Yet if Tokyo was her coronation, then it was the Commonwealth Games where she learnt the fundamentals of royalty. In both Glasgow 2014 and on the Gold Coast in 2018, she won four gold medals, leaving her two behind the Commonwealth record of 10 jointly held by Susie O’Neill, Ian Thorpe and Leisel Jones.

With a double already in her keeping in Birmingham, the 50m freestyle on Monday morning (AEST) gave her the opportunity to surpass a trio of athletes she considers to be her heroes and inspiration. After 25m, there was no doubt the Olympic champion was about to be out on her own.

McKeon was too sharp for Dolphins teammates Meg Harris and Shayna Jack, sprinting into history in front of a roaring crowd that included her parents Ron and Susie, who could only watch from afar last year as their daughter tore up the Tokyo lanes.

The 28-year-old is usually a study in understatement and keeps her emotions in check. But with yet another accolade added to her growing list, and after a few days where she was part of an unwanted narrative involving former partner Kyle Chalmers, the tears began to tumble down her cheeks.

She said she still had trouble digesting the success that had come her way and wasn’t sure how to be proud of herself. Thankfully, McKeon has plenty of people willing to help share that load.

“It’s special. It makes me reflect on the last eight years since my first Commonwealth Games. I can see how far I’ve come as a person and an athlete,” McKeon said.

“To be honest, I kind of find it hard to be proud of myself at times. So that’s something I’ve struggled with in a way. But it’s nice to be here with these girls and racing with this team. It’s awesome that we all get behind each other and it’s a really nice environment to come away with every year.

“It’s really nice to be mentioned alongside some of those names, be part of that history. They are the ones who inspired me when I was young, that inspired me to be where I am now. I have them to thank.”

When McKeon took a three-month break after Tokyo, she wasn’t certain she would ever return to the pool. Now that she has, she looks as graceful and brilliant as ever, and racing with a freedom that only a haul of Olympic titles can afford.

“I only got back in the water at the end of March, I didn’t really know what to expect. But the place I’m at now, that time off towards the end of last year and start of this year, that’s showing in my performances now. I’m happy and I’m enjoying it, I’m taking the pressure of myself for this meet as well.”

This is a special era for Australian swimming and McKeon’s feats continue to inspire those around her, including Ariarne Titmus, who finished the night for Australia by laying down the fastest women’s 200m relay split in history (1:52.82) to pilot the 4x200m team to a world record.

“I love Em. When I first made the Dolphins team as a 16-year-old, she took me under her wing, we were roomies and I learned a lot from her,” Titmus said.

“She’s probably the most humble athlete around, she’s so understated and just goes about her business. She deserves it more than anyone. She’s a silent assassin, we’re all so proud of her.”

News, results and expert analysis from the weekend of sport sent every Monday. Sign up for our Sport newsletter.