Home » Sport » England vs Australia: Day one of third Ashes Test in a nutshell

England vs Australia: Day one of third Ashes Test in a nutshell Jofra Archer claimed a maiden Test five-for as a late flurry of wickets saw England bowl Australia out for 179 after an otherwise frustrating, rain-filled first day of the third Ashes Test – writes David Currie at Headingley. David Warner (61) and Marnus Labuschagne (74) cashed in on an increasingly-ragged England effort in the field as their frustration built, sharing in a century stand for the third wicket.

But a second burst from Archer in the evening brought a flurry of wickets – eight falling for 43 runs – as he first claimed key man Warner to break the partnership and then mopped up the tail to finish with 6-45 from 17.1 overs, in only his second Test cap.

Moment of the Day

An easy one, this. “It takes a good ball for Broad to be impressed with his own bowling,” said Nasser Hussain, “and Broad is mighty impressed. That is one of the best deliveries he’s ever bowled and you can tell from Broad’s reaction – he loved that. That was unplayable and Broad knows it!” Broad beat Warner repeatedly early on in Australia’s innings with no reward only to pick up the wicket of Usman Khawaja with one that slid down the leg-side. There was no denying the quality of the ball that removed Travis Head, though – a beauty that angled in from around the wicket before leaving the left-hander off the pitch and clipping the outside of off.

Stats of the Day

There have only been 16 individual knocks since 2006 where a batsman has played more false shots in their first 30 balls, than Warner today. Incredible good fortune for the Aussie opener. #Ashes https://t.co/CuIH5QdFbP

According to our model, if the average batsman had faced the balls Labuschagne faced today, they would have scored 54 runs and been dismissed 1.7 times. He outperformed both – extremely well played, horrible conditions. #Ashes

Why wasn’t Jofra Archer bowling at 90mph? Is he injured again? Is he knackered? Was it all a dream? Keen observers of the speed gun were quick to notice an early drop in Archer’s average speeds from 88mph and 87mph in the innings at Lord’s to 85mph in his opening nine overs of the day, raising inevitable questions about just how much his Herculean effort at HQ had taken out of him. To be fair, Archer didn’t help matters with this tweet on Sunday.

Me getting out of bed tomorrow morning pic.twitter.com/dQ6FK91EWr

But, as it turned out, there wasn’t much cause for concern. Mike Atherton explained. “Root knows this ground better than anybody and would have said: ‘Here at Headingley, this is how wickets tend to fall’. It’s not clattering people on the helmets here. It’s not just about the pace, it’s the length. It looked a very deliberate change to me.”

Perhaps Root had a change of heart at drinks in the evening session as Archer cranked it up to 89.5mph – his fastest ball of the day up to that point – to find Warner’s edge and revive flagging England. Five more wickets later and all questions were answered. Michael Holding, analysing Archer’s action suggested that “the effort today is not the same as it was at Lord’s; he is bowling medium pace because the fire isn’t there. I think he’s a little bit weary.” 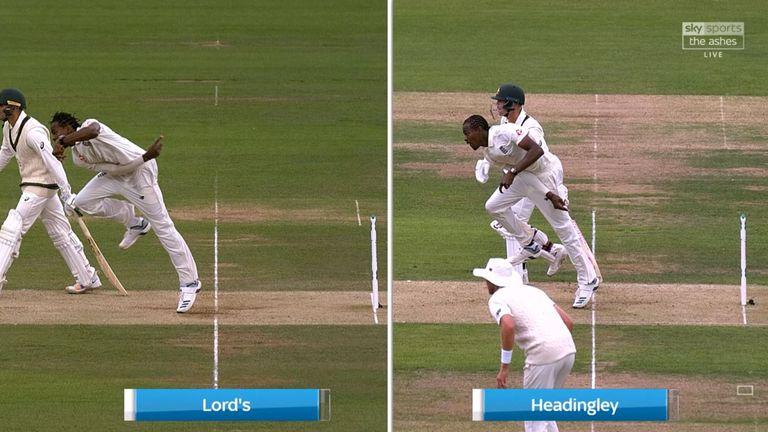 But the paceman put all matters firmly to bed in an interview with Holding straight after close of play – he was simply bowling to order, and has plenty more gears to find. 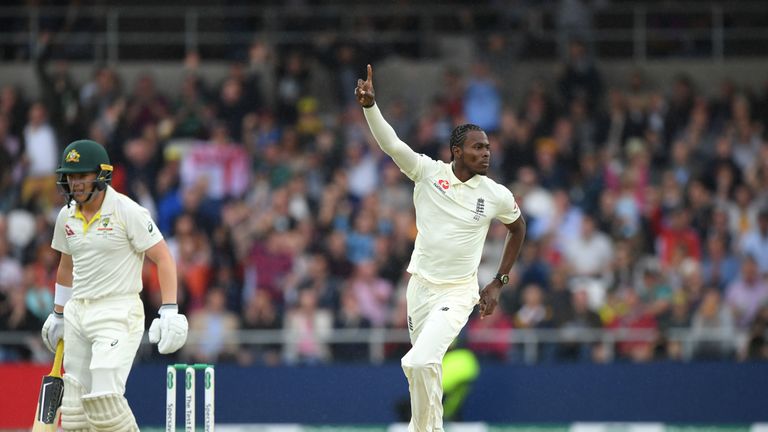 Tweets of the Day

If England bowl like this for the remainder of the day Australia will be retaining the #Ashes this week ….

The secret to bowling at Headingley is to plug away as if it was flat – don't go searching for wickets as it's a fast-scoring ground when the bowling is off-line..

Colour note well under way, just needs players and spectators Had a great day thanks to @YorkshireCCC #Headingley #Ashes pic.twitter.com/AAQxGdYr2r

MIKE ATHERTON: “It always felt – even during that partnership between Warner and Labuschagne – that wickets would tumble. All’s well that end’s well for Joe Root. He looked really concerned when he stood at slip after tea and Woakes and Stokes were bowling poorly.”

RICKY PONTING: “It’s a special moment for Jofra Archer. The crowd has loved every moment of his bowling today.”

JOFRA ARCHER: “I’m over the moon to get six wickets but equally happy just to get off. The ball just started swinging randomly from the over before the Warner wicket. It got a bit more overcast and then from then on the ball was really good. We thought it was going to be a repeat of Lord’s and losing the first day. But we got a large portion of the bad weather out of the way today.”