EXCLUSIVE: Ecuador face being kicked out of the World Cup as Sportsmail reveal new evidence of fake passports, multiple identities and an apparent cover-up… with audio and documents confirming Byron Castillo WAS born in Colombia

Ecuador face being kicked out of the World Cup after Sportsmail obtained new evidence of a shocking admission from one of their players of using a false birth certificate, with the confession made in an official investigation that was covered up by the Ecuador Football Federation [FEF].

The stunning revelation in FIFA’s inquiry into the case of Byron Castillo comes days before their Appeals Commission are due to rule on the matter on Thursday, and could alter the identity of Qatar’s opponents in the first game of the World Cup and who England will face in the last 16.

An extraordinary story involving alleged fake identities and an apparent cover-up by the Ecuador Federation centres on the question of whether Castillo, a right-back who made eight appearances in World Cup qualifying, was born in the country or across the border in Colombia.

In a new piece of evidence that will send shockwaves through South American football and create a major headache for FIFA, Sportsmail today publishes an audio recording of an interview Castillo gave to investigators four years ago, in which he: 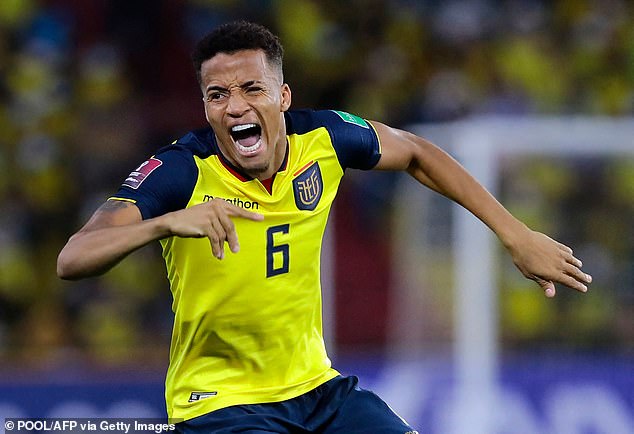 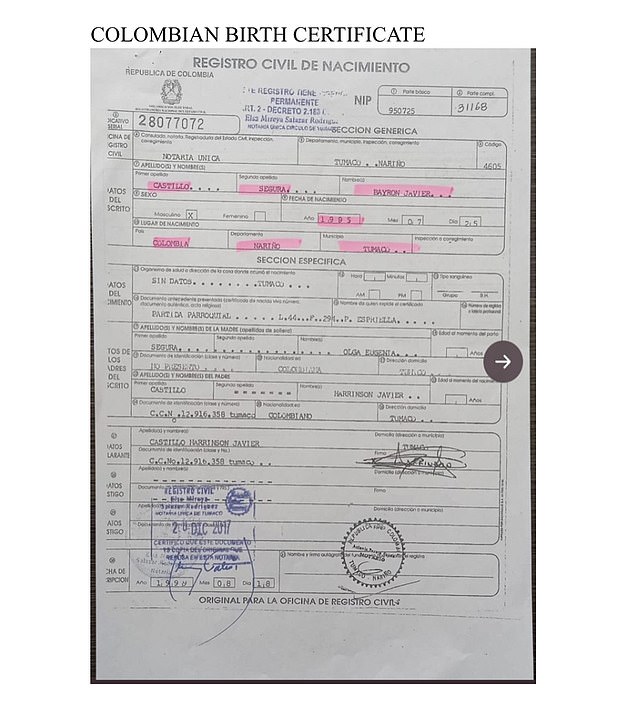 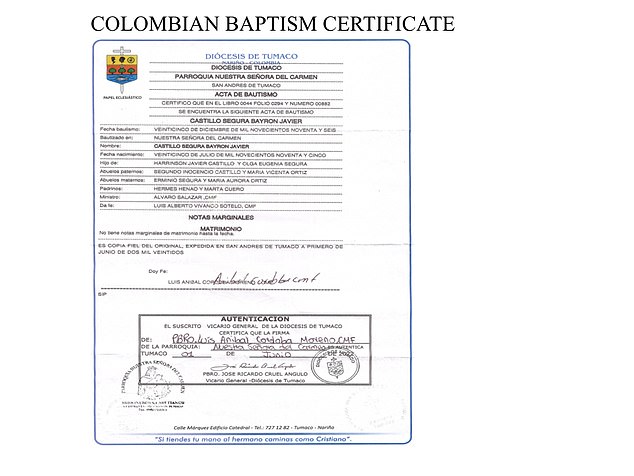 The letter states that Castillo is a Colombian national who was born in Tumaco in 1995, as well as adding that they have audio proof of the player’s confession. Despite this in 2019 the FEF officially ruled that Castillo was an Ecuadorian citizen.

FIFA have been investigating Castillo since April when they received an official complaint from the Chilean FA, who claimed that he was ineligible to represent Ecuador as he is a Colombian citizen who entered Ecuador as an illegal immigrant.

Hosts Qatar are due to play Ecuador in the opening game of the World Cup against on 20 November so removing them from the tournament at this late stage would be a major embarrassment for FIFA, who in June dismissed Chile’s complaint with a ruling that Castillo was born in Ecuador. This evidence was not presented in the June hearing, but is expected to form part of Chile’s case when the FIFA’s Appeals Commission consider the matter this week. 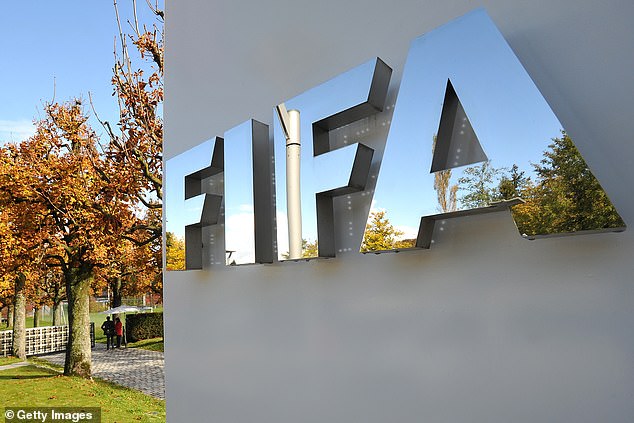 Chile’s case centres on allegations that Castillo was born in Tumaco, Colombia, in 1995, whereas his passports states that he was born in 1998 in General Villamil, Ecuador. There are two birth certificates registering slightly different names connected to the player which are also published by Sportsmail today – one from Colombia (Bayron Javier Castillo Segura) and another from Ecuador (Byron David Castillo Segura.) The Colombian certificate states that Castillo was born on 25 July 1995 and the Ecuadorian certificate has his date of birth as 10 November 1998.

The doubts over Castillo’s identity first emerged in 2015 when his proposed transfer between two Ecuadorian clubs Norteameria and Club Emelec collapsed due to ‘irregularities’ in his documentation.

In 2018 NorteAmerica were suspended by the FEF after being found guilty of sponsoring and benefitting from players’ falsified documents, which led the FEF to set up an independent Investigative Commission to examine the issue fake passports being used football clubs throughout the country.

The crucial interview with Castillo in which he appears to admit that his official documents are fake took place in Ecuador in December 2018. In the interview Castillo is asked by the investigator, ‘when exactly were you born?’ to which he replies, ‘In 95.’ The investigator’s next questions is, ‘And which year does the ID have?’ an inquiry which gets the response ’98.’

Castillo is then asked, ‘What are your real names?’ to which he answers, ‘Bayron Javier Castillo Segura.’ 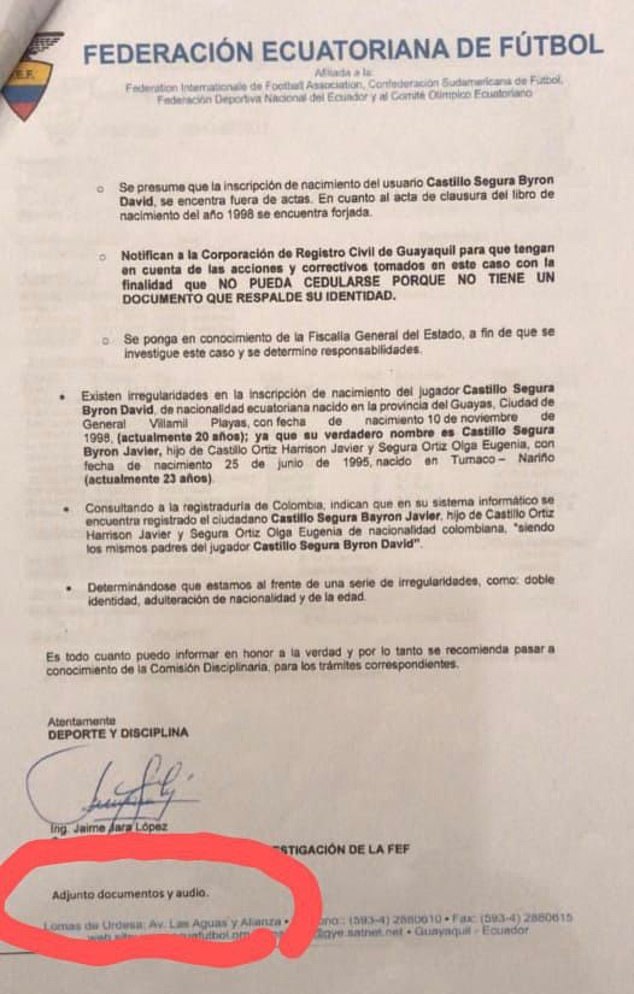 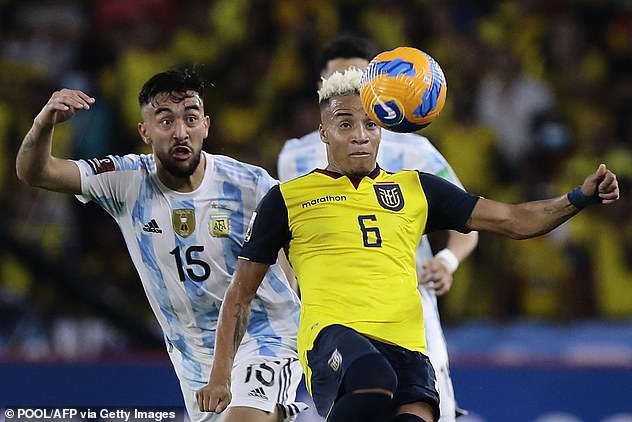 Castillo goes on to describe in some detail leaving his home in Tumaco for San Lorenzo, which is located around 50 miles over the border in Ecuador.

‘I crossed the border because, you know, teams from Tumaco play in San Lorenzo,’ Castillo says. ‘I went to do some trials in San Lorenzo, I remember that very well. I never got picked for any of the teams at those trials, but my friend who was picked never turned up so I went instead.

‘I went home, I told my parents that I have to go, but in that time we didn’t have any money, I remember that very well. There was no money. And I started crying. So my Dad said maybe another time and my Mum as well. My mum was worried, she didn’t want to do this to me and this and that. And I was worried. My Dad left around 7, he came back at 11 or 12, with money, 20,000 Colombian pesos. With that I travelled to San Lorenzo.

‘I arrived and I didn’t know how to fix things. I didn’t know. They said this and that. We are going to do this, we are going to help you. I needed help. I came here because I wanted to help my family. I knew the situation there in Tumaco. I arrived and started playing without any problem, oblivious. And just now I see all the problems come up.’

Castillo also names NorteAmerica owner, Marco Zambrano, as the man responsible for providing his new paperwork and fake ID. ‘Marco Zambrano did everything for you at the beginning?’ he is asked. ‘Sure, he told me he was going to help me, this and that,’ Castillo replies. 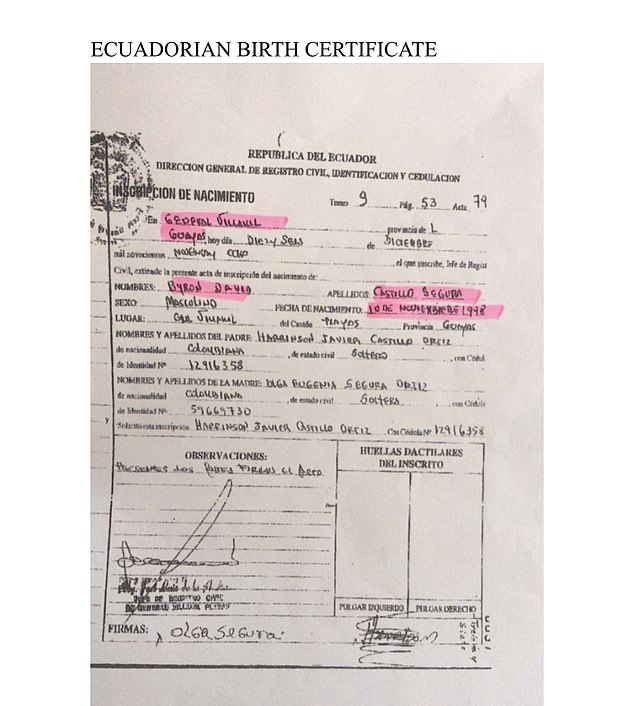 The audio recording published by Sportsmail today will put pressure on FIFA’s Appeals Commission to take decisive action, as well as raising questions for the Ecuador’s FEF, who appear to have ignored the findings of their own investigation.

Castillo had already been capped at junior level by Ecuador at the time of the investigation in 2018, but did not make his first senior international appearance until 2021, when he won the first of the 10 caps he has collected to date.

Castillo has never publicly addressed the issue of his nationality, but has been asked to appear via video link before FIFA’s Appeals Commission to answer their questions. It is not known at present whether he intends to attend.

In addition to Castillo’s admission regarding his birth date and the fact he left Tumaco for San Lorenzo, there is considerable documentary evidence which strongly indicates he was born in Colombia, some of which was published by Sportsmail last month. 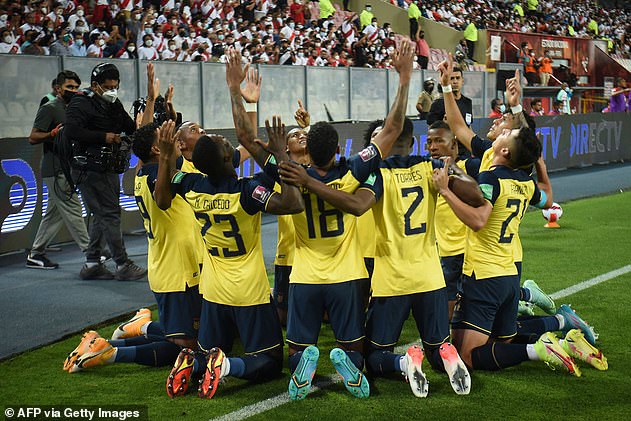 Ecuador could make way for Chile, who are hoping to replace them at the World Cup

In addition, the signature of his father Harrinson Jose Castillo in the Ecuadorian document does not correspond to the signature in the Colombian document. In 2018 a report from the General Director of the Civil Register in Ecuador declared that Castillo’s Ecuadorian birth certificate did not exist in its internal records, and concluded it was false.

Chile are hoping to replace Ecuador if they are thrown out of the World Cup, as Castillo played against them in two qualifying games from which they took just one point.

If FIFA followed recent precedent by awarding two 3-0 victories in the event of their complaint against Ecuador being upheld Chile would move up from seventh to fourth in the South American qualifying competition ahead of Peru on goal difference, which would see them earn a place in Qatar. Peru are the other potential beneficiaries if Ecuador are simply expelled with all their matches forfeited, as they finished fifth in the table.

In 2016 Bolivia were stripped of four World Cup for fielding an ineligible defender Nelson Cabrera, who had previously represented Paraguay, with Chile and Peru both awarded 3-0 victories as a result.