NSW Swifts superstar Helen Housby has urged her teammates to do something in Sunday's Super Netball grand final that they haven't managed against the Sunshine Coast Lightning this season: to play their best 60 minutes.

The Lightning have been Super Netball's pacesetters since the competition's inception in 2017, and they're widely tipped to celebrate a third straight title at Brisbane Entertainment Centre on Sunday afternoon. 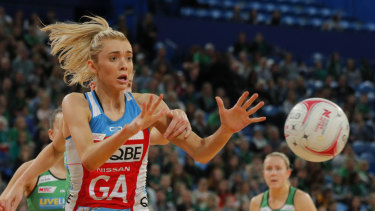 Swifts star Helen Housby has challenged her teammates to produce their best performance of the season in Sunday’s grand final.Credit:Getty Images

However, Housby – who famously broke Australian hearts when her last gasp goal won England the 2018 Commonwealth Games gold medal – knows how the "underdogs" can seize the silverware.

"We've shown in patches that we can beat them," she said. "In each of the three games we've played we've led by five, eight and nine during different aspects of the game.

"We know it's going to take 60 minutes of our best netball, and I don't think we've done that yet against the Lightning. It's just about being consistent because we know how dangerous they are, especially in the second half.

"They get little runs where they can put six goals on you, so the scores quickly change. We need to stay on top of our game, play consistently, play well, don't throw the ball away and win as much ball back as we can."

The Swifts have defied incredible odds – and expert opinion – to become grand finalists.

No commentator predicted them to finish in the top four, while they also lost their inspirational skipper Maddy Proud, Kate Eddy and Lauren Moore, to season-ending injuries.

Compounding that was English international Natalie Haythornthwaite missing the first half of the season with a hamstring problem, while Housby was sidelined for three crucial games upon her return from the World Cup.

"We just love being the underdogs, no-one has backed us all year," said Housby of the Briony Akle-coached side. "We don't mind that, it seems to work for us.

"Nobody is backing us in this final, and that's just fine. We're staying in our own bubble and enjoying the process. We've really enjoyed this grand final week and, hopefully, we'll finish off nicely."

Statistics suggest the Swifts can win if they unleash their best netball.

They have the league's lowest general play turnovers, have scored the most goals from the opposition's turnovers and are the league's best at scoring from their own possession gains and centre passes, but Housby declared an even greater team trait. The Swifts, she said, are a "family".

"This is probably the best environment I've ever been in in my professional career," she said. "We're a group of girls who enjoy each other's company on-and-off the court.

"Most of this team are from interstate and overseas, so we've become each other's family. That's put us in a great place because it's really important when you get into the clutch moments to know the person you're passing to has your back.

"That sums this team up. The reason we do the little one-percenters is because we work hard for each other."

Housby added it was also important that the Swifts found time to breathe during the title-decider.

"I think the key is keeping relaxed and smiling a little bit," she said. "Games like this can be a cauldron of emotion and pressure. When the game starts you need to hit them with your intensity and then you not only match what they're doing but rise above it. 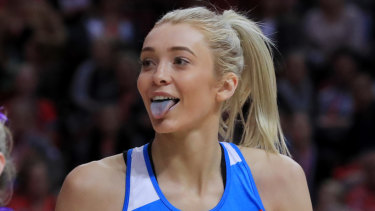 Housby says the Swifts need to enjoy the grand final, rather than get caught up in the occasion.Credit:Getty Images

"We have to be the team that wants it more. We need to set the pace early but we'll also need to know when to push and when to be calm with the ball; to treasure possession.

"But, I really love being called the underdog. We have absolutely nothing to lose, which is how England won the Commonwealth Games gold medal decider. We're excited. Nothing to lose now, everything to gain."