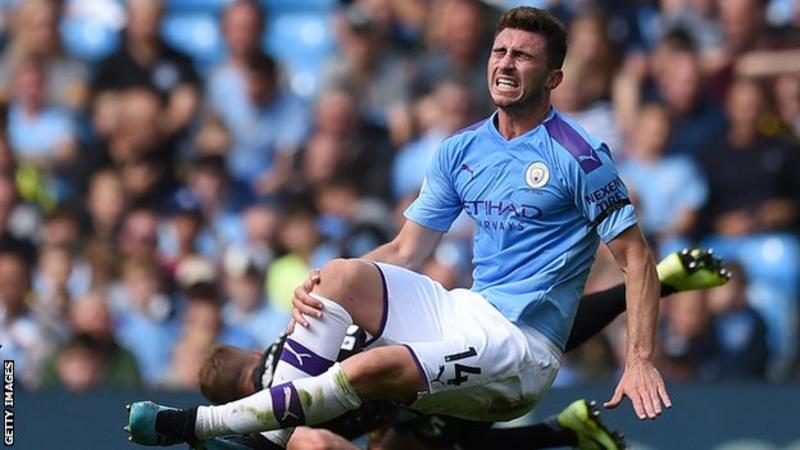 Manchester City boss Pep Guardiola was told to limit his spending this summer – and it could leave him with a central defensive headache.

City are yet to discover the full extent of the injury Aymeric Laporte sustained in Saturday’s 4-0 win against Brighton.

But Guardiola says “it doesn’t look good” and knows any absence will leave him with just two senior centre-backs.

Skipper Vincent Kompany left this summer and was not replaced.

That left Laporte, Nicolas Otamendi and John Stones as the champions’ only recognised central defenders.

City were keen on Harry Maguire but were not prepared to match the £80m Manchester United paid Leicester for the England man.

“The club told me there is a limit and we cannot go for it right now,” said Guardiola.

The Spaniard spent a club record £62.8m on midfielder Rodri, plus an additional £60m on Portugal full-back Joao Cancelo, who is yet to make his debut. City recouped around £60m through the sales of Danilo, Fabian Delph and Douglas Luiz.

“We cannot afford it like other teams can afford it,” added Guardiola.

“I never complained about that. We paid a lot of money for a lot of players, that is why we have a deep squad with a lot of quality. But you have a limit. Maybe in the future, but right now we cannot do it.”

Guardiola expects Stones to return after a two-game absence for the trip to Norwich on 14 September, but with the Champions League campaign starting after that, plus EFL Cup commitments later this month, the City boss may have to get creative in central defence.

That could mean Brazilian midfielder Fernandinho continuing in a defensive role following his appearance as a substitute on Saturday, or Kyle Walker shifting from the right-back spot, something he has not done for City before.

“It is what it is,” said Guardiola. “We are in the season and the guys need to step forward.