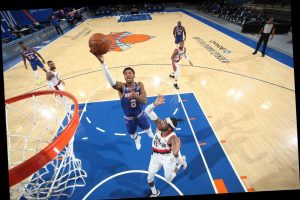 Carmelo Anthony likes what he sees out of new-look Knicks

Two weeks after the Knicks failed to complete a stirring comeback in Portland, when they couldn’t stop All-Star guard Damian Lillard, they more than held their own in the point-guard battle against the Trail Blazers to post their second straight victory.

Elfrid Payton netted 22 points in his second straight strong performance and rookie backup Immanuel Quickley kicked in 12 points in 13 minutes off the bench as the Knicks held off Lillard and the Blazers for a 110-99 win Saturday at the Garden.

Julius Randle added 22 points and 11 rebounds, RJ Barrett scored 18 and Alec Burks nailed four 3-pointers for 16 points off the bench for the Knicks, who next will play a home-and-home set against the Heat on Sunday afternoon at the Garden and Tuesday night in Miami. The Knicks (11-13) didn’t notch their 11th win last season until their 40th game and didn’t win their 12th until their 44th contest.

“I think going into the season, the focus was on daily improvement. So that hasn’t changed,” Knicks coach Tom Thibodeau said before the game about his team completing one third of the 72-game schedule. “Obviously, there are some things that we’re doing well and some things that we’re not doing as well as we would like.

“But we want to keep focused on each game, what’s exactly in front of us, build the right habits. We have a lot of young players that we want to develop as the season goes along. But we also want to challenge our veterans to improve. … I think we have a good balance to our roster, but there’s a long way to go.”

Lillard, who was back in the Blazers’ lineup after missing Thursday’s game against the 76ers with an abdominal injury, finished with 29 points — 10 fewer than he managed against the Knicks on Jan. 24 in Portland.

Former Knicks star Carmelo Anthony missed seven of eight shots and scored a season-low two points off the bench for the Blazers, remaining 11 behind Oscar Robertson for 12th place on the NBA’s all-time scoring list.

The Knicks netted the first six points of the game, but were tied 10-10 four minutes in, with each of their five starters nailing an early bucket. That balance continued for the rest of the quarter — with no Knicks starter having fewer than four points or more than six (Randle). But Lillard’s 13 points in the session, including a 30-footer with 1.2 seconds remaining , gave Portland a 31-26 lead.

Two 3-pointers by Burks drew the Knicks even early in the second, and a couple of drives by Quickley kept them within 42-41 midway through the period.

Quickley had poured in a career-high 31 points in 24 minutes in the last meeting with the Blazers, but Payton played the entire first quarter Saturday after notching 20 points in Wednesday’s win in Chicago.

Barrett (who finished with a team-best 12 points in the half) and Payton connected from long distance as the Knicks closed out the second quarter on a 16-5 spurt to carry a 57-51 advantage into intermission.

Buckets by Barrett and Payton again to open the third extended the Knicks’ cushion to 10. Randle then twice responded to 3-pointers from Rodney Hood and Lillard with jumpers from beyond the arc for a 67-57 game barely three minutes into the second half. Payton finished the quarter with 10 for an 84-76 lead entering the final 12 minutes.