Home » Sport » Shakur Stevenson wants to shake off comparisons to Floyd Mayweather and become the world’s No.1 boxer on his own terms

Shakur Stevenson wants to shake off comparisons to Floyd Mayweather and become the world’s No.1 boxer on his own terms 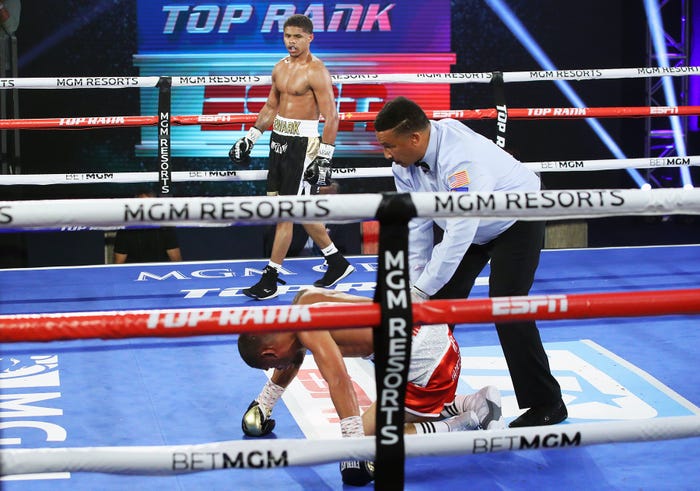 Shakur Stevenson respects Floyd Mayweather for what the retired boxer accomplished in the ring.

The 23-year-old has often been compared to the former five-weight champion as his promoter Bob Arum — the CEO and founder of Top Rank — telling Insider that watching Stevenson is like looking at Mayweather in the mirror.

"Floyd was an orthodox fighter, which means you're a right-handed fighter," Arum told us in February. "Shakur Stevenson is a southpaw, but he's a mirror image of Floyd Mayweather.

"When I first marveled at Floyd's ability, and I saw Shakur, [I thought], 'My God, it's like the mirror! The right hand and the left hand, it's Floyd Mayweather!'"

Insider relayed this to Stevenson on a Zoom call this week, ahead of the youngster's super featherweight match Saturday against Toka Kahn Clary at the MGM Grand Conference Center in Las Vegas, which will be broadcast on ESPN.

"It definitely feels good hearing that," Stevenson told us. "Floyd is Floyd. People don't give him [enough] praise but I think he was one of the greatest boxers to do it, and have a lot of respect for him inside the boxing ring.

"It do feel good hearing certain people compare me to him. But I'm the first Shakur Stevenson. I've got my own style, my own personality."

Stevenson is following in the footsteps of Terence Crawford

During the video call, Stevenson was in the same room as Terence Crawford — one of the world's best boxers — who was shooting pool behind him.

Every now and then during the call Crawford sank a pocket, triggering Stevenson to talk about how much he admires his Top Rank stablemate.

"I look up to Terence Crawford," Stevenson told us. "He's a big, positive influence on my life, one of the best boxers, and outside of the ring is a real personality."

The sport of boxing is a story that, in 2021 and beyond, could be told by the young kings of the game, and Stevenson is one of those kings.

Stevenson, already a former WBO featherweight world boxing champion at a young age, wants to follow in Crawford's footsteps and be a multi-weight ruler.

In his way could be a number of other prominent athletes aged 25 and under.

"It's a good era to be in," Stevenson told us. "We're in a tough era. There's a lot of great boxers, hungry fighters who all want to prove that they're the best, and I'm going to be there standing tall."

He stopped short of calling it a dream fight, but said a bout between himself and Gervonta Davis – who is backed by Mayweather Promotions — "will be a big, big fight."

First, is the match with Clary. The fight, Stevenson's second of the pandemic-era, will take place behind-closed-doors in the same venue he helped usher major, American boxing back to operations earlier in the year after the COVID-enforced hiatus.

"I think he's a solid fighter," Stevenson said. "He does some good stuff … solid all around.

"I think he makes a lot of mistakes, too, though. He tries to be too aggressive. He thinks in his brain that he's a big puncher, but he's really not. I've not felt his punches yet, but I can tell he's not a big puncher."

Victory for Stevenson this weekend would mark the 15th of his three-year pro career, one which he wants to take to the highest level in the coming years.

"My goal is to the No.1 pound-for-pound fighter in the sport, become one of the best fighters to ever do it, be the best," he said.

And who he really is, is Shakur Stevenson, a fighter named after rapper Tupac — who is his own fighter and has his own personality despite the comparisons to Mayweather.