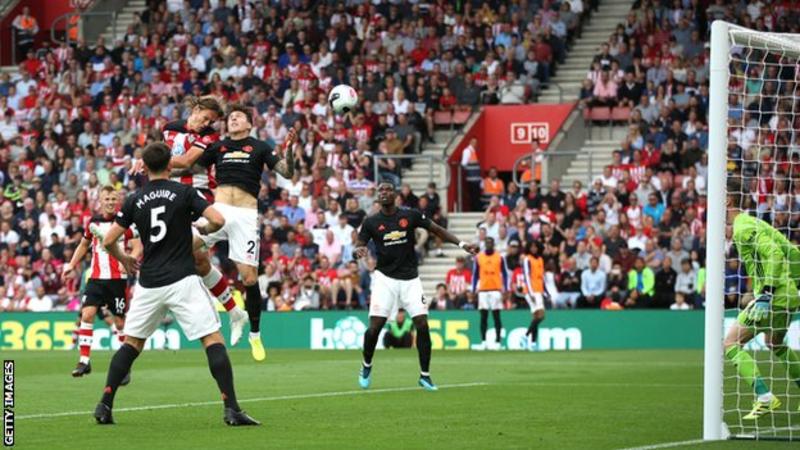 Jannik Vestergaard’s towering header gave 10-man Southampton a point after another moment of magic from Manchester United new boy Daniel James looked to have put them on course for victory at St Mary’s.

James scored his third Premier League goal in four appearances with a fierce, rising right-foot drive after only 10 minutes, and the 21-year-old Wales attacker was the biggest threat for Ole Gunnar Solskjaer’s side.

Saints, however, gained momentum in the second half as a disappointing United side grew increasingly sloppy, and Vestergaard capped a spell of pressure with the equaliser just before the hour.

Che Adams had blazed wide of an open goal and David de Gea had saved superbly from Danny Ings before the giant figure of Vestergaard rose to meet Kevin Danso’s fine cross.

It proved the high point of Danso’s afternoon as he was then sent off for a crude lunge at Scott McTominay when he was already on a yellow card, leaving referee Mike Dean with an easy decision.

United, predictably, laid siege to Southampton’s goal in the closing stages but were kept out as keeper Angus Gunn saved superbly from Marcus Rashford and Mason Greenwood, while both Jesse Lingaard and Ashley Young were just off target.

It leaves the Old Trafford side with only one win from four league games, the opening-day win against Chelsea being followed by draws here and at Wolves and that home defeat by Crystal Palace.

It was ironic, then, that a lack of killer touch by those left behind saw United leave St Mary’s with just a point after taking charge of most of the first half and mounting an assault on Southampton’s goal following Danso’s dismissal.

James mixed the dangerous and the erratic after his brilliant goal but looks a real talent, with pace to burn and end product – the same could not be said for the disappointing Rashford.

Solskjaer will rightly point to the late heroics of Gunn and several other near misses but their chance of victory suffered its biggest blow when they lost any semblance of control early in the second half and allowed the hosts, always determined under Ralph Hasenhuttl, back into the game, culminating in Vestergaard’s header.

Juan Mata had little influence, while Paul Pogba produced the sort of display that frustrates so many, conceding possession countless times and his efforts paling in comparison to those of the likes of James and McTominay.

United’s recent record is dismal, reading just two wins in their past 13 games and with no away victories since Paris St-Germain were beaten in the Champions League in March.

There is plenty for Solskjaer to ponder – and work on.

Saints boss Hasenhuttl’s reaction at the final whistle showed exactly what this point meant to him and his side.

The Austrian punched the air in delight, hugged counterpart Solskjaer then delivered a few more clenched-fist salutes before making his way around the pitch taking the adulation of the home fans.

It may only have been a draw but his delight was understandable. Hasenhuttl must have feared the worst when Danso’s reckless lunge at McTominay left his side at a numerical disadvantage and at United’s mercy.

Goalkeeper Gunn played his part, while bravery and last-ditch defending answered other emergency calls. It was exactly what Southampton’s manager and supporters wanted to see.

It also means Saints can look back at a good week, with a win away at Brighton, victory at Fulham in the Carabao Cup and a creditable draw here after opening with defeats at Burnley and at home to Liverpool. 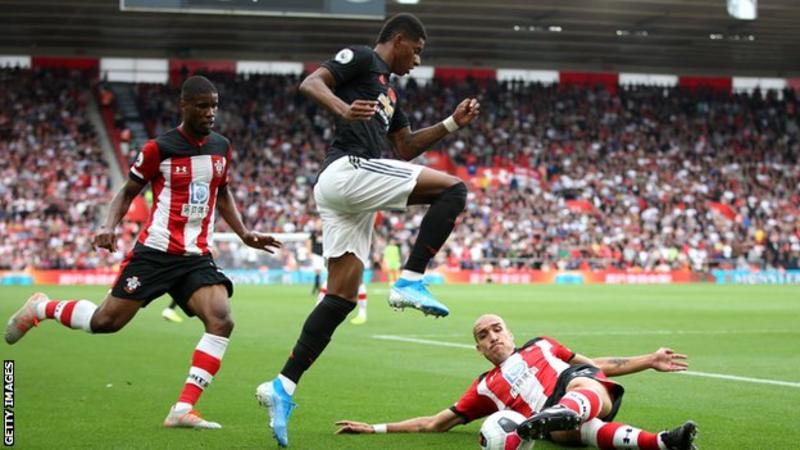 United’s winless away run goes on – the stats

‘Daniel James is fantastic’ – what they said

Southampton boss Ralph Hasenhuttl, speaking to BT Sport: “We showed good mentality today after the red card. It was not easy. But with all the hard work, a man less and a third game in a week it is an unbelievable performance mentality from my team. I can only raise my hat to them. It was fantastic today.

“In the first half we showed a really intense performance. There was one action where we went 1-0 down. The players believe in what we are trying to do and showed they are always trying to be positive. That was the key to the success today.”

Manchester United manager Ole Gunnar Solskjaer, speaking to BBC Sport: “We need some scrappy goals as well. We should have won today – we had the game where we wanted it [but] we were careless in our finishing and our last pass.

“We built pressure, we got round them, created good openings but the clinical edge wasn’t there. We should have won, again.

“Daniel James is fantastic – he has a great attitude, he wants to learn, he is hungry. He is at the start of his career but with his habits he will have a good one. We want to help him become the finished article.”

Southampton travel to Sheffield United in their first game after the international break on Saturday 14 September (15:00 BST), while United welcome Leicester City to Old Trafford at the same time.

Stuart Armstrong (Southampton) is shown the yellow card for a bad foul.

Nemanja Matic (Manchester United) wins a free kick in the defensive half.

Pierre-Emile Højbjerg (Southampton) wins a free kick in the attacking half.

Delay over. They are ready to continue.

Delay in match because of an injury Cédric Soares (Southampton).

Attempt missed. Marcus Rashford (Manchester United) header from the centre of the box misses to the right. Assisted by Daniel James.

Attempt saved. Mason Greenwood (Manchester United) left footed shot from outside the box is saved in the centre of the goal. Assisted by Harry Maguire.

Attempt missed. Jesse Lingard (Manchester United) right footed shot from outside the box is close, but misses to the right. Assisted by Paul Pogba.

Attempt saved. Marcus Rashford (Manchester United) left footed shot from the left side of the box is saved in the bottom left corner. Assisted by Paul Pogba.

Aaron Wan-Bissaka (Manchester United) wins a free kick in the defensive half.

Attempt missed. Daniel James (Manchester United) right footed shot from the left side of the box misses to the right.

Attempt saved. Daniel James (Manchester United) left footed shot from the left side of the box is saved in the top centre of the goal. Assisted by Paul Pogba.

Ashley Young (Manchester United) wins a free kick in the defensive half.

Scott McTominay (Manchester United) wins a free kick in the defensive half.

Attempt missed. Nemanja Matic (Manchester United) left footed shot from outside the box is high and wide to the left. Assisted by Jesse Lingard.

Paul Pogba (Manchester United) wins a free kick in the defensive half.

Attempt blocked. Marcus Rashford (Manchester United) left footed shot from the left side of the box is blocked. Assisted by Paul Pogba with a through ball.