Home » Sport » Time running out for Diamond contenders to shine

Time running out for Diamond contenders to shine

While Lisa Alexander is no stranger to tough selection calls, the Diamonds coach rates the task of choosing the 12 for July’s Netball World Cup defence as “definitely the most difficult’’ she has faced during her tenure now in its eighth year.

International experience and performances in recent Quad Series, as well as information gleaned from a five-day squad camp in Canberra in March are also being considered as Australia seeks a 12th world title won and shared from the 15 played.

Versatility and flexibility are priorities in the 10-day, eight-game tournament environment and, even for a group stunningly bumped down to the silver-medal dais by England at last year’s home Commonwealth Games, depth is an enviable problem to have.

“Six other athletes could go into that team and still do a really great job and win for their country,’’ said Alexander. “So it’s a matter of picking what we believe is going to work best with the game plan and the strategies that we need to use against the opposition we’ll face over there.

“So that’s a part of our decision-making, as well. It’s that real balance between understanding that a team of champions is great, but you’ve also got to have a champion team that work very well together, and at the moment the [Melbourne] Vixens are certainly showing that.’’ 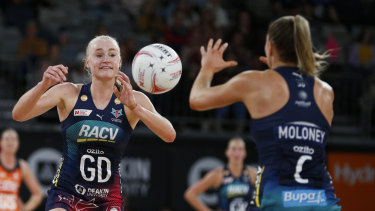 Six Melbourne Vixens are in the 19-strong Diamonds squad.Credit:AAP

Indeed, six members of the Super Netball premiership favourites’ starting seven are in the 19-strong national squad, with the other, Renae Ingles, having retired from international netball after 67 Tests. There are three Giants and Magpies, two each from the Swifts, Firebirds and Fever, and one from Lightning, with only the Thunderbirds unrepresented.

Four extras were invited to the March camp, and Alexander has not ruled out someone doing a Paige Hadley – the NSW bolter having been elevated from outside the squad and straight into the 12 for the 2015 World Cup. Already during this selection process the 26-year-old has been promoted from training invitee to full-squad status in what is nevertheless a crowded midcourt field.

“Off the back of last year where she was a struggling for form, I think Paige has been one who’s really shown over this period of time that she’s really world class, and has been enjoying some terrific form of late,’’ Alexander said.

There are still three broader squad vacancies that may or may not be filled, with Magpie Ash Brazill the most head-scratching omission from the original group, and apparently not without a chance of pushing her way back in.

“At the time, yes, there were some really great intercepts, but it was more about that ‘denying’ work and working in a unit together, and Ash received feedback on that,’’ Alexander explained. “The pleasing thing is that she’s been doing that these first two weeks. So she’s doing everything in her power to put her hand up for the squad, which is terrific.’’

With so many imports wearing the GS bib, the shooting options are the most limited. Alexander has called for patience as captain Caitlin Bassett works her way back from injury at a new club, is happy with the form of Gretel Tippett and Vixens duo Caitlin Thwaites and Tegan Philip, and encouraged by Sascha Glasgow and Kara Coenen earning circle minutes, even if Giant Keira Austin’s have been limited.

So with the coach nominating young Firebirds Kim Jenner and Tara Hinchliffe plus uncapped Swifts trio Sarah Klau, Kate Eddy and Maddy Turner among the defenders on the rise, some of the toughest decisions loom in the middle.

After taking a break from Diamonds duty to deal with exhaustion, 60-Test regular Kim Ravaillion appears refreshed and ready to return. The catch: she is in competition with the likes of Liz Watson, Gabi Simpson, Kelsey Browne, Kate Moloney and Jamie-Lee Price for just four centrecourt spots.

So, as the countdown continues, what is Alexander looking for? In short: ball-winning, stingy defenders, accurate, low-error feeders with flair in attack, and goalers consistently shooting above 90 per cent accuracy. And if the desired quality of performance comes against an English, Jamaican or New Zealand opponent, for example, even better.

There has been a consistent message to all World Cup hopefuls since the squad left camp at the AIS in March: the best way to impress the selectors now is by performing for your club. Two rounds down, three to go. Reminders needed: nil.