KOFI Kingston has revealed how he tried to fight behind-the-scenes for a longer match against Brock Lesnar during SmackDown’s debut episode on Fox.

After a six-month reign as WWE Champion, Kingston dropped the title to “The Beast” on October 4 when he was pinned in under ten seconds after being hit with a single F-5. 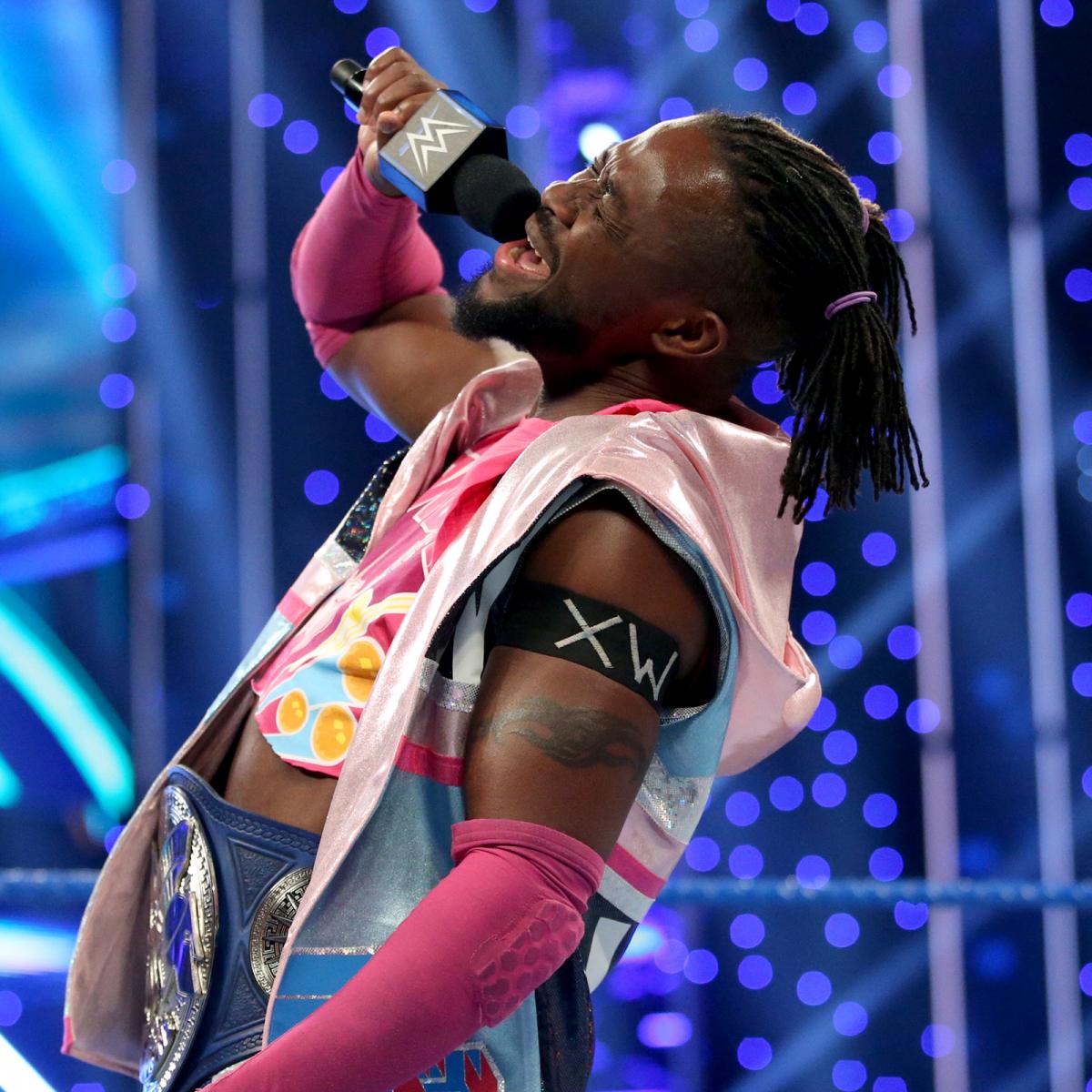 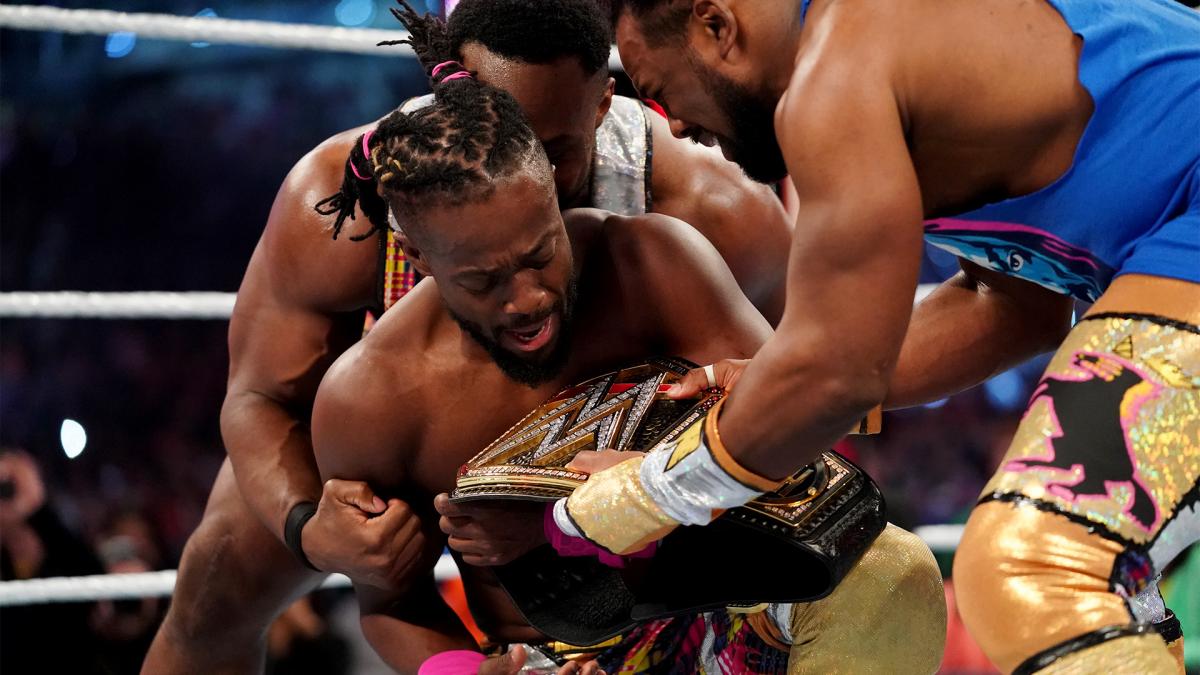 The squash booking decision was seen as a controversial by many fans, following Kofi’s popular championship win against Daniel Bryan at WrestleMania 35 – dubbed “Kofi-Mania”.

It felt like WWE had switched the title to the more bankable Brock Lesnar to appease Fox executives – and use Kofi to set up a feud between Brock and Cain Velasquez.

Kofi’s journey to the title was captured in the WWE 24 documentary The Year of Return, featured on the WWE 24: Best of 2019 DVD, out next Monday December 9.

But true to the positive mantra of his three-man team The New Day, the 38-year-old superstar remains upbeat about his loss to Lesnar.

Speaking exclusively to Sun Sport, Kofi said: “I was in the same boat as everybody else – you never know what is going to happen that day when you get to the building.

“I would have loved to have a longer match because I feel like the story that Brock and I could have told could have been a lot more compelling than it was.

“That’s not to say I didn’t try to fight for a longer match or a more compelling story, but that’s not the route they wanted to go. That’s the nature of the business.

“You can be mad and complain and come to work miserable, but I had a six-month title reign, which is few and far between.

“I got to achieve my dream and I’m all about pushing forward – to strive to achieve great things rather than dwell in this dark space of negative energy.

“That’s not me. I want to maximise my time here to achieve as much as I can.” 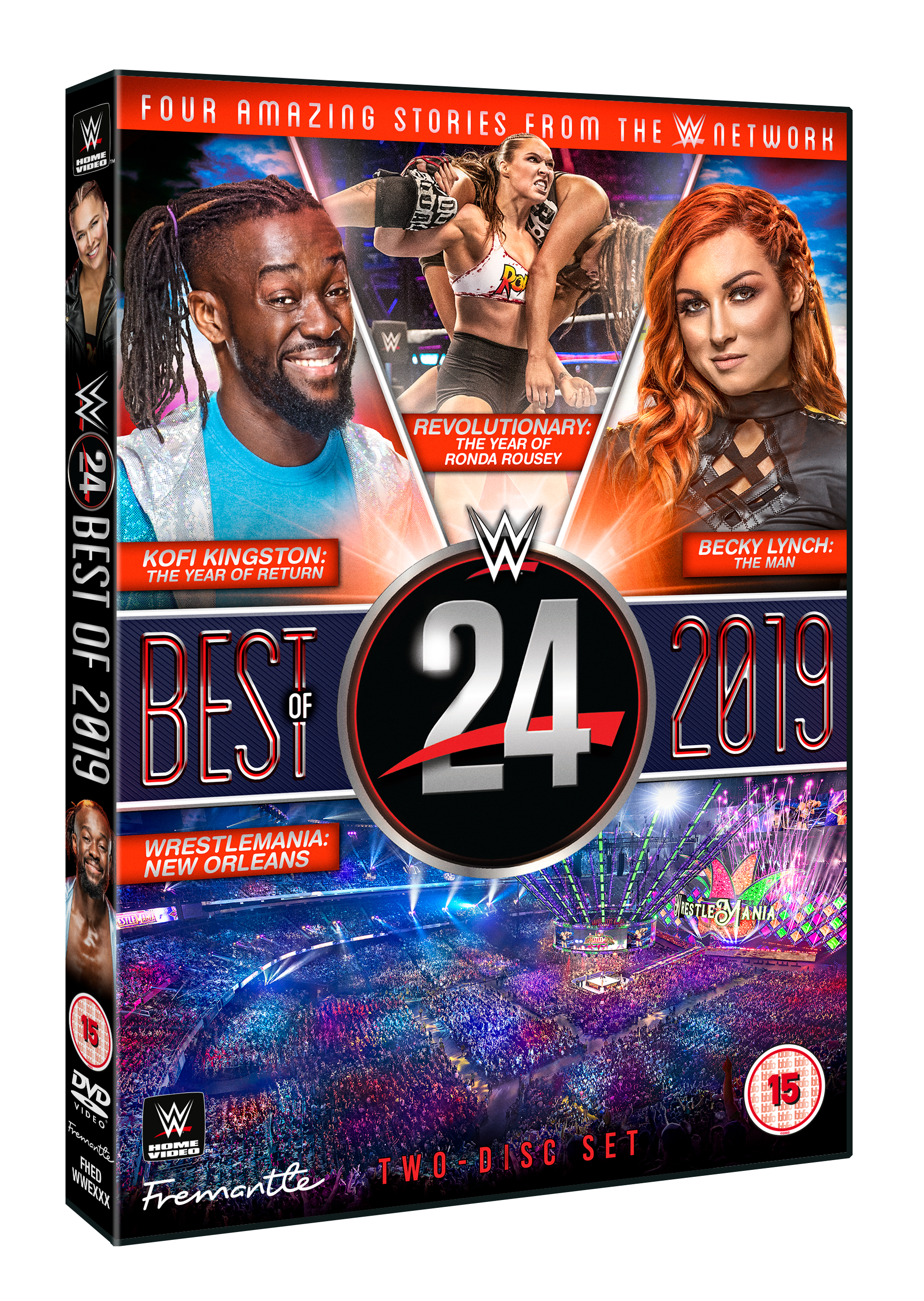 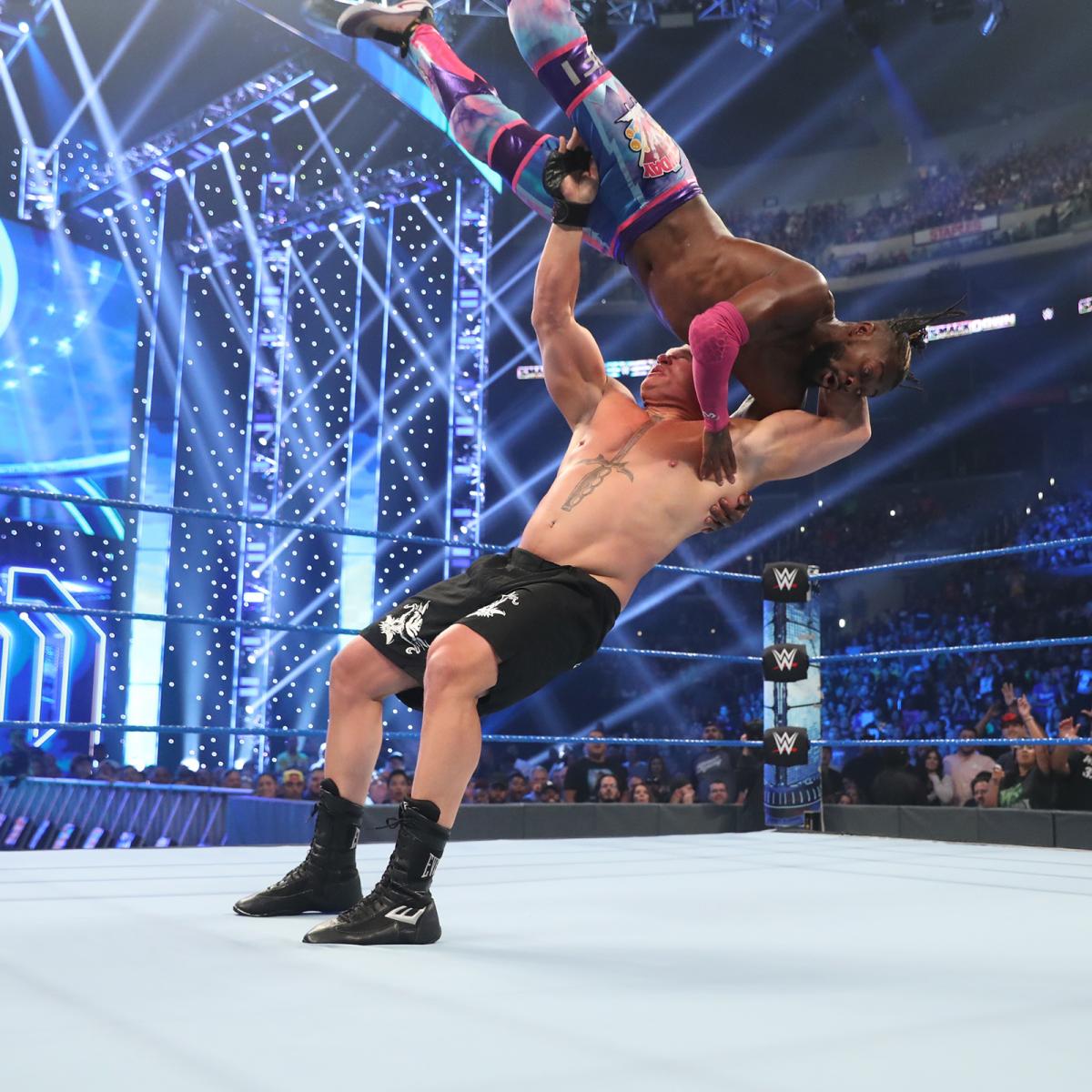 Fans also criticised was the fact that Kofi barely acknowledged the loss on television.

But Kofi says 2019 has been “by far” the best year of his career – and he’ll be ready when the next title shot comes around.

He said: “The way the storylines go – and twists and turns that we take – it’s a testament to just always being ready. You have to make sure you catch the ball when it’s thrown to you.”

As seen in the WWE 24 documentary, Kofi’s rise to the championship at WrestleMania came after battling it out for 11 years in WWE.

When Mustafa Ali was injured before Elimination Chamber in February, Kofi took Ali’s spot and was thrust into a rivalry with then-WWE Champion Daniel Bryan.

The fan support for Kofi was undeniable and propelled him into a match against Bryan at WrestleMania.

Kofi won the title in a gripping and emotional battle. It was the best match on the card and ended with Kofi celebrating in the ring with The New Day and his children.

Kofi credits the support to a mutual respect between himself and the fans. He also credits Daniel Bryan – who had a similar journey to the title five years earlier – for making the win such a huge WrestleMania moment.

Kofi said: “I’ve always had the philosophy of treating everybody with respect. I always take a moment to say hello or shake a hand when fans ask me for it.

“I think doing that over the years paid off, giving the people what they want and being a guy people can relate to.

“That’s not why I do it – I do it just because that’s the way to treat people. The unseen benefit was that people felt like they were going on this journey with me.

“It was the perfect scenario. If I’d have won the WWE championship when I’d first came into WWE it would have been cool, but to have to fight for it and to take people on that ride.

“On top of that, Daniel Bryan did the exact same thing – the people were demanding he was put in that WWE Championship role at WrestleMania 30 through the ‘Yes Movement’.

“It was just poetic. There was not a better opponent for me than Danial Bryan, because of the story and because he’s one of the best in the world – one of the best I’ve been in the ring with.

“People were sending me reaction videos after the match – there were grown men jumping up and down in bars, kids doing the same thing.

“If it was all to end tomorrow, I’ll always have that moment – the emotion and energy that we felt from those 85,000 people in that stadium.”

If it was all to end tomorrow, I’ll always have that moment – the emotion and energy that we felt from those 85,000 people in that stadium

Originally from Ghana in West Africa, Kofi was the 51st man to hold the title and the first African American WWE Champion.

Kofi returned to Ghana as champion as part of a national “Year of Return” celebration. His inspiring visit was also captured in the WWE 24 documentary.

Back in the ring, the toughest challenger of Kofi’s reign was Randy Orton.

Kofi had wrestled against Orton 10 years ago – including a famous brawl around Madison Square Garden – but Orton reportedly had Kofi’s main event push halted backstage.

Kofi was able to use that real-life frustration and past animosity as he finally defeated Orton – the culmination of a story 10 years in the making.

Kofi said: “A lot of the best storylines teeter on reality. In real life, he wasn’t one of my biggest supporters when I was coming up.

“Obviously that’s changed now. But to have that storyline come into fruition and to use that as a catalyst was awesome.

“Randy has been here for a long time – he’s another of the greatest ever. We’ve talked about the whole thing.

“When you get into being a WWE superstar, you have to figure out how to grasp people’s attention. There are a lot of great superstars out there.

“We knew this was the route we had to go. We thought, ‘How can we best tell this story to the people?’ Coincidentally, it came to a head at Madison Square Garden.

“It was all so serendipitous and I believe everything happens for a reason. I’m just glad we got to tell that story in the way that we did.” 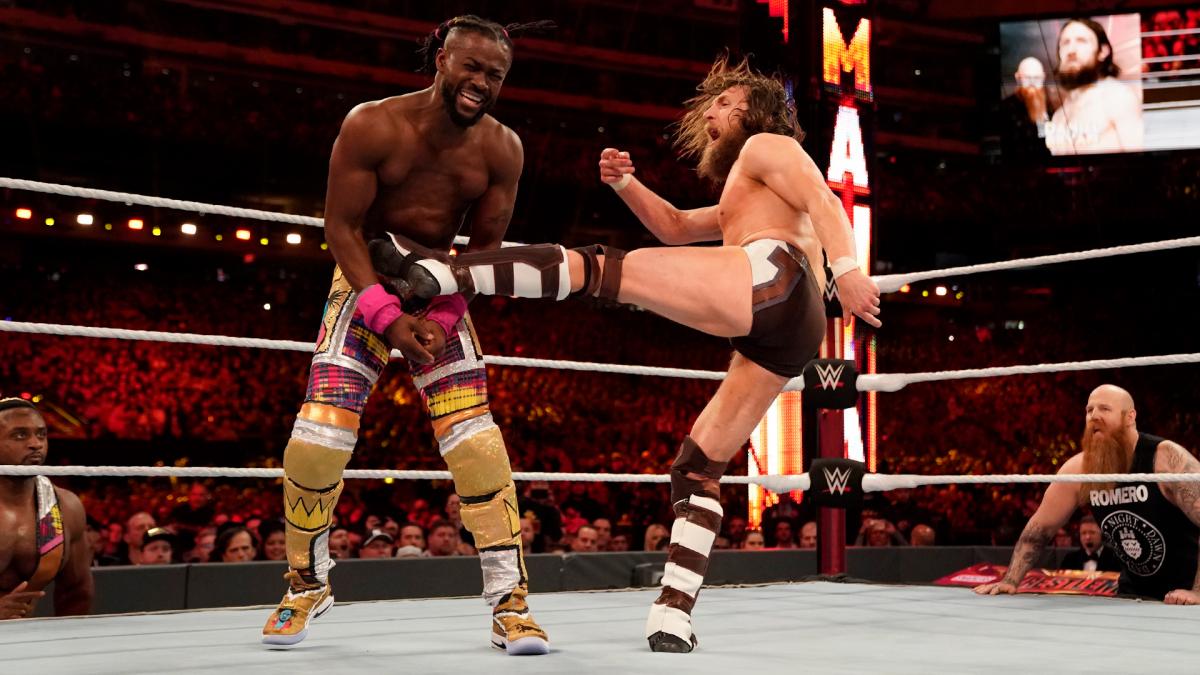 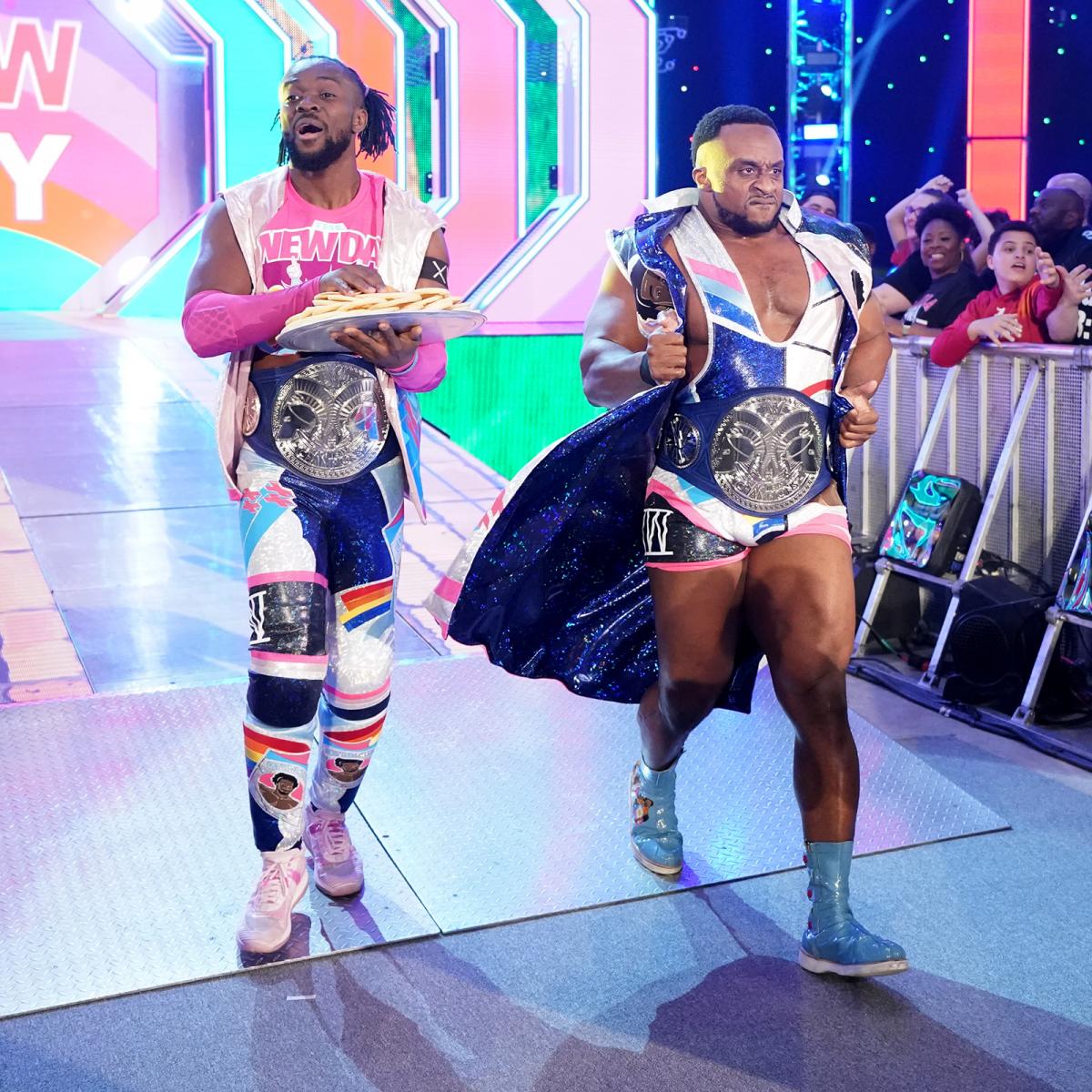 While fans may have criticised WWE boss Vince McMahon for Kingston’s unceremonious title loss to Brock Lesnar, Kofi credits McMahon as being a firm supporter of both himself and The New Day.

In a touching moment captured in the WWE 24 documentary, The New Day embraced McMahon right after Kofi’s historic match at WrestleMania.

Now celebrating five years together as a team – long after most groups in wrestling would have split – The New Day are still going strong.

Kofi said: “Vince doesn’t get involved in every storyline. If he does, that to me is a testament to his faith on what is happening.

“Even when nobody else really understood what The New Day was, he was probably our strongest supporter.

“There’d be people who’d make fun of us for trying to make this work and say, ‘Oh you guys are just some gospel preachers.’ There’d be a lot of comments like that but never from Vince.

“Vince had always taken great care of me on the roster. I’ve always been in a prominent position.

“When I came through the curtain at WrestleMania and we all with embraced with Vince – that was a very real thing because it’s been a long journey.”

Now Kofi Kingston is back competing in tag team competition as one half of the SmackDown Tag Team Champions along with New Day partner Big E.

Kofi puts the group’s long-running success down to a very real bond between himself Big E and Xavier Woods, who’s currently out of action with an Achilles injury.

And despite years of speculation among fans and whether The New Day members will turn on each other or pursue singles careers, Kofi maintains that they’ll never split. He also can’t imagine them ever wrestling against each other.

Kofi said: “We’re all about the group. We always want each other to achieve as much success as possible.

“Everyone talks about singles careers. We’re like, ‘Yeah, we can do that, but we don’t need to split up!’ Why would we do that? You’d want to have a squad to go up against the roster rather than try and do it by yourself.

“Breaking up just doesn’t make sense. That’s what makes us different to any other faction out there.

“I couldn’t imagine having a serious fight with Big E or Woods. I’d be laughing because for me it just wouldn’t be real.

“If all of us could hold singles titles, that’s a goal for us. It’s also Woods dream to be King of the Ring, so that’s a goal too. We want to march to that goal together because we’re a lot stronger.

“It’s way harder to do that stuff by yourself. On top of that, we actually like each other. Five years down the road there have been no fights or confrontations.

“It’s always going to be The New Day as a group. You’ve never seen a group with a bond like ours and we intend to keep it that way.”

WWE 24 is out on DVD from Monday December 9.