Anderson Cooper Recalls Getting 'Destroyed' by Cheech Marin on Jeopardy!: 'I Got Really Cocky' 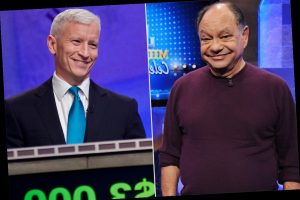 Anderson Cooper is reminiscing on his past Jeopardy! appearances ahead of his guest hosting gig.

Last week, it was announced that Cooper will be joining the rotation of interim hosts in the wake of Alex Trebek's death last year — but it won't be his first experience with the beloved game show.

"I've been on four times, so I got to meet Alex, which was such a thrill because I'm such a Jeopardy! fan," the Anderson Cooper 360° host said on The Ellen DeGeneres Show Wednesday.

The first time he appeared on Celebrity Jeopardy!, Cooper, 53, said he tried to "cram" the night before.

"I panicked the night before because I realized I need to know all this stuff. So I went online and did all this research, tried to like, cram, as though you can really cram for Jeopardy! — it doesn't really work," he told host Ellen DeGeneres. "And I read all these blogs from former Jeopardy! champions about buzzer theory, and some sort of game theory."

The CNN anchor ended up winning, so when he found out he would be up against Cheech Marin from the comedy duo Cheech & Chong for his next appearance, he was feeling confident. "I got so thrilled to win the first time, and it was all for charity. When I went on the second time, I was against Cheech Marin from Cheech & Chong," Cooper recalled. "And I got really cocky because I was like, I mean, come on, Cheech Marin … He's been smoking a lot. The synapses can't be really sharp."

But Marin, 74, "destroyed me," Cooper admitted. "He's so fast on the buzzer and he's so smart! He knows everything."

"You know what it's like to walk into the newsroom at CNN after you've lost to Cheech Marin?" he added. "It doesn't go well."

Ken Jennings, a consulting producer and one of the show's "Greatest of All Time" champs, was the first guest host after Trebek died in November of pancreatic cancer at age 80. After Jennings' current run, executive producer Mike Richards will take on the role before the other guest hosts begin.